Somalis are clever, smart, curious, and fast to learn. But feelings and perceptions are based on a common trust that you have to achieve to build a working relationship with our host, we are a bridge between two rivers, two different cultural environments, and two countries. 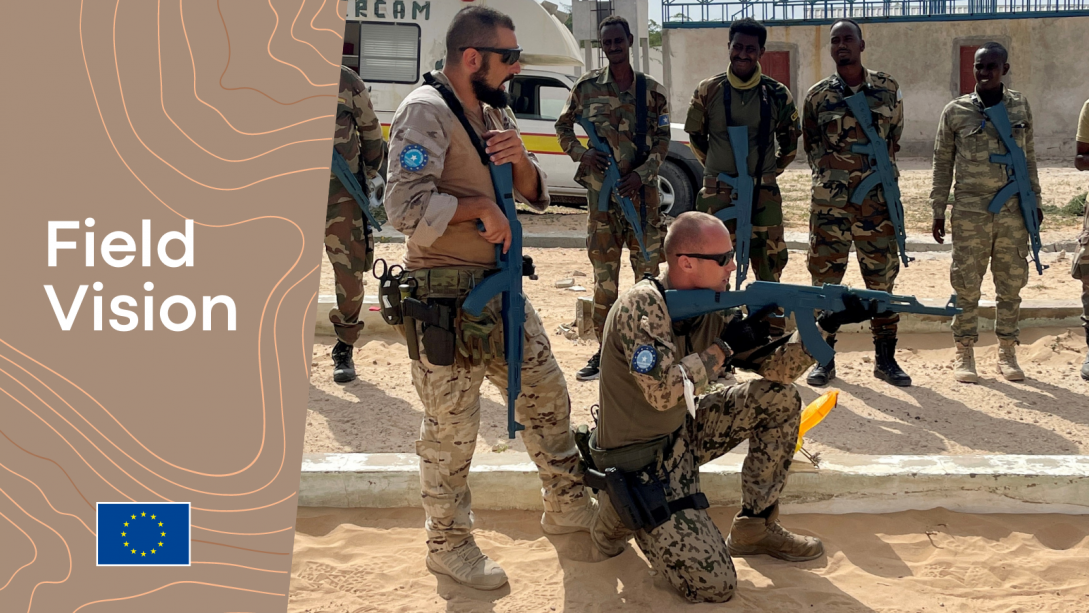 Somalia is a fragile democracy coming out from a dictatorship of more than twenty years, a civil war, and the rise of religious extremism. Fragile security conditions caused by a fraught, complicated and complex electoral process, together with deep-rooted tensions between political stakeholders and the imminent threat posed by Al Shabab all influence EUTM Somalia’s work.

Since 2010, the EU’s military mission in Somalia (EUTM Somalia) has contributed to strengthening Somalia’s federal government and the defence and security institutions in the country providing training, mentoring and advice. EUTM Somalia is one of three EU Common Security and Defence Policy (CSDP) missions and operations in the Horn of Africa, together with the naval operation EUNAVFOR Atalanta off the coast of Somalia and the civilian mission EUCAP Somalia. As part of its mandate, it supports the development of the Somali National Armed Forces (SNAF), including the command and control (C2) relationships, general structures, and logistical concept and structures.

Rebuilding Somali institutions is an ongoing challenge, though Somalia is starting to walk the path towards rebuilding its statehood. ‘The path is difficult and fraught with difficulties and obstacles’, admits EUTM Somalia’s Force Commander Brigadier General Roberto Viglietta, from the Italian Army, ‘yet even despite the challenges, Somalia elected for the fourth time its President of the Federal State on 15 May 2022'.

'This is an important achievement’, especially if one takes into account the political instability in surrounding African states where, quite often, power politics and political violence play a large role to control power. ‘Today, Somalia is governed by political power’ underscores Brigadier General Viglietta, ‘that’s already progress knowing where the country comes from’.

The Somali National Security Forces play an important role in ensuring stability and peace in the country, and provide additional support to the African Union Transition Mission in Somalia (ATMIS)  Forces to overcome the challenges and create a safe and secure environment in the country, ‘the conditio sine qua non for any possible success’, underscores Brigadier General Viglietta.

However, important challenges remain for Somali Armed Forces to become the agent of stability that the country needs. Although the country’s Armed Forces are expanding, the vision underlying this expansion is fragile, focusing on individual skills and courage, and on increasing the numbers of soldiers and rifles, rather than on developing enablers, Command and Control structures and planned or intel-lead operations that are more likely to promote stability in the long run.

‘Somalia’s military is still a world of heroes rather than soldiers’, admits Brigadier General Viglietta. ‘Our role, the role of EUTM Somalia, is to act as an agent of change’. That implies providing capacity building through strategic level advice and training to Somali authorities within the Security Institutions in the Mogadishu Area, as well as specific mentoring, advice, and training capacity. ‘We are helping the Somali authorities to build modern Armed Forces that can provide stability and security for their population. That requires training and building the right capacities and skills to do so’.

Lt. Col. Umberto Salvador is an Advisor from the Italian Army. His job is to provide strategic advice to the Somalian counterparts. ‘This is a challenging task’ he admits, ‘as you need to connect your capabilities with the necessities of the advising audience. When I have to advise someone I have to take care not only of what I am able to share with him or her, but also his or her cultural, military, and religious background.’

Talking with the Somali personnel, ‘you can perceive the willingness to learn and to apply your advice, but also the latent feeling of suspicion against the foreigner from a population that is coming out of 30 years of war’ explains Salvador. ‘My experience advising the Ministry of Defence staff is showing me that Somalis are clever, smart, curious, and fast to learn. But feelings and perceptions are based on a common trust that you have to achieve to build a working relationship with our host, we are a bridge between two rivers, two different cultural environments, and two countries’. Providing advice to Somalis is part of EUTM’s job, ‘but their future remains fully in their hands’ stresses Salvador.

A second and central element of EUTM’s mandate is military training. Captain Victoria Alejandre Terroba has been training Somali trainees for over 4 months. ‘The mission we are carrying here is vital for the Somali National Armed Forces’ explains Alejandre, who acknowledges that good preparation is key for the Armed Forces to provide stability. Not all the trainees have the same military education or training, which makes it a challenge for the trainers. ‘We see them come on the first day of training with zero or little knowledge, but they leave the training centre with a good grasp of the fundamentals in their fields that enable them to extend the training to other Armed Forces personnel’ highlights Captain Alejandre.

In some instances, students only have a limited military background, whilst in others, trainees have poor to no writing and reading skills. ‘It is at that moment that trainers have to try to do their best so that every trainee understands the lesson that is taught and the general aims of the course’, says Alejandre. The rewarding part of the training arrives when the trainees finish the course and achieve the main goals, which can be very different depending on the course they have done: to become a Platoon Leader, a Company Commander, an intelligence analyst, or an Improvised Explosive Devices (IEDD) searcher.

Maj. Anna Maria Puolakka from the Finnish Army supports this point, highlighting the many benefits of the EU’s military training and cooperation with Somalia. ‘The people I work with are really dedicated to their job and really want to improve the skills and capabilities of the Somali National Armed Forces and its personnel’, stresses Puolakka.

A mentor by profession, an important part of her role is to support the needs of the Somali Armed Forces, to help determine the future of training, and to consider, together with the Somali Armed Forces Training Personnel, ways and means to achieve the objectives envisioned for the training and education. ‘Much of the work done today will bear fruits in the years to come’ she notes, adding that ‘mentoring is always about cooperation, collaboration, and relationship with the aim of supporting and improving the skills and capacities of the partner. That is what we’re here for: to support our Somali partners to build a future for and by themselves’.