HR/VP Blog - Last week, we had a G7 Foreign Ministers Meeting in Münster in Germany. While the Russian war against Ukraine dominated the agenda, we also discussed our relations with China and the situation in Iran and in Africa. We also addressed the latest developments in the Western Balkan in the wake of the Berlin Process Summit that I attended earlier in the week. 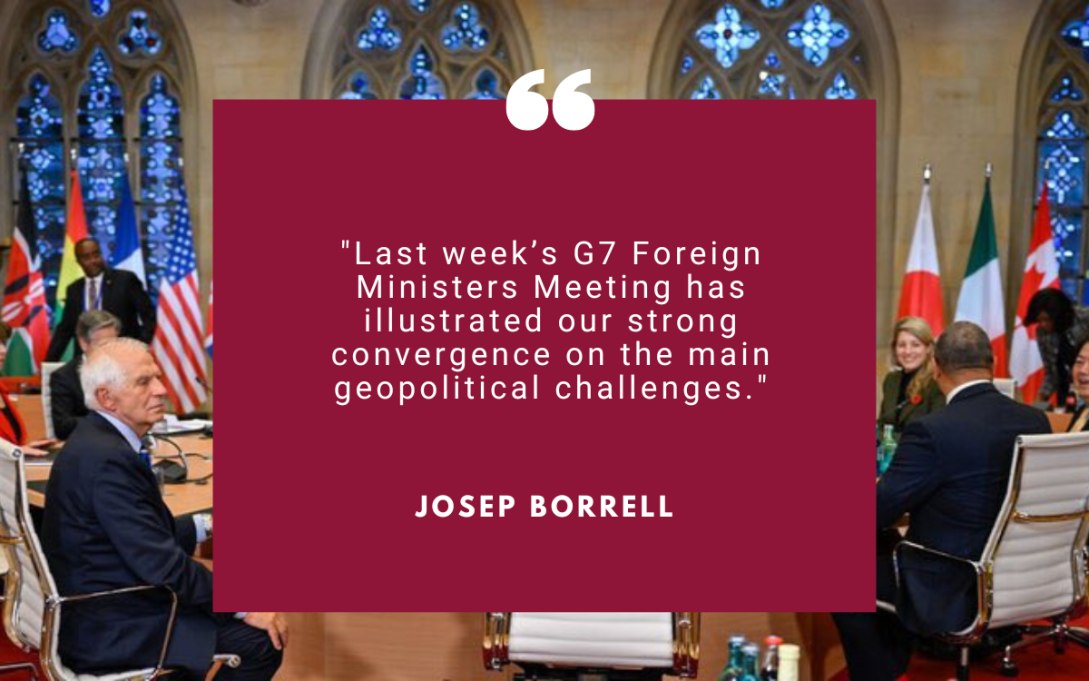 The G7 Foreign Ministers were welcomed last week for two days in the historic city of Münster by my colleague Annalena Baerbock, the German Foreign Minister. First of all, we all agreed that we have to stay the course on our strategy regarding the Russian war of aggression against Ukraine: supporting Ukraine, pressuring Russia and addressing the wider fallout of the war.

It’s been nearly 9 months since Vladimir Putin started its illegal aggression. Together with the Ukrainian Foreign Minister, Dmytro Kuleba, who joined us by video link, we condemned Russia’s recent escalation, including its attacks against civilians and civilian infrastructure, in particular energy and water facilities using missiles and Iranian drones and trainers. As Putin did not succeed to conquer Ukraine, he obviously now intends to terrorise the Ukrainian population and destroy the country.

“As Putin did not succeed to conquer Ukraine, he obviously now intends to terrorise the Ukrainian population and destroy the country. “

But Ukrainians are fighting back and we support them in any way we can. Together with our member states, the EU mobilised over €19 billion for Ukraine’s economic, social and financial resilience, and €3.1 billion in military support. Our help also includes technical support to help repair energy infrastructures and supply of additional power generation. We will also increase our humanitarian support, which has become even more pressing in view of the approaching winter. Keeping Ukraine’s economy afloat remains key. The EU is to propose a substantial financial package of up to € 1.5 billion a month, totalling up to € 18 billion, to significantly cover Ukraine's financing needs for 2023.

“It is crucial that the Black Sea Grain Initiative is extended beyond 19 November. It is not acceptable to use food and hunger as a weapon of war.”

We also discussed the importance of ensuring that Ukraine's agricultural exports can reach the world, and gave full support to the UN's efforts to get Russia to resume its participation in the Black Sea Grain Initiative. It is crucial that the agreement is extended beyond 19 November: Russia must not use yet another pretext to renounce to its obligations. It is not acceptable to use food and hunger as a weapon of war. I also underlined the importance of the EU-Ukraine Solidarity Lanes, which have been used to transport the great majority of Ukrainian agricultural and non-agricultural exports since the start of the Russian war.

In addressing the wider fallout of the war, we also discussed the situation of Central Asia. The countries of the region are increasingly looking towards the EU as they are seeking more security and a diversification of their partnerships, including in the field of sustainable connectivity, trade and energy. I will travel to Samarkand next week, for an important Connectivity Conference and what will probably be the most meaningful EU-Central Asia Ministerial meeting.

China and the Indo-Pacific

We also discussed the situation in China and in the Indo-Pacific region, reflecting on the outcome of the recent 20th National Congress of the Chinese Communist Party. With President Xi Jinping’s third mandate as General Secretary of the Party, China is obviously consolidating its assertive policies. Additional tensions in the Taiwan Strait could in particular have a disruptive effect on EU-China relations and we must prepare for the different possible scenarios.

“For the EU, China remains, simultaneously, a key economic partner, an overall competitor, and a systemic rival. Rivalry and competition are however increasingly prominent.”

For the EU, China remains, simultaneously, a key economic partner, an overall competitor, and a systemic rival. Rivalry and competition are however increasingly prominent. We have to manage competition with China across all areas, and at the same time aim for constructive cooperation, where possible and in our interest. This includes global challenges like peace and security, global health, the climate and biodiversity crisis and the conservation of natural resources, in particular ahead of a crucial week with the start of the COP 27.

We must level the playing field for our companies operating in China and make sure that our dependencies do not turn into vulnerabilities. China plays a crucial role in many supply chains and our dependence on China for our green transition strategy is currently higher than our dependence on fossil fuels from Russia. China accounts for 90% of our magnesium needs, 90% of our rare earths requirements and 80% of the solar panels used in the EU. We need to work on reducing these excessive dependencies, addressing vulnerabilities and strengthen our resilience. We will continue engaging with our partners on China – including through the G7.

The dire situation of human rights in China is one of the most divisive issues in EU-China relations and we called on China to act in accordance with its international commitments and legal obligations. Our top concerns are about Xinjiang, Tibet and Inner Mongolia. When we meet Chinese representatives at senior and top levels, we raise these points systematically and I expect all member states to do the same. We will continue to air our differences, mindful that our pressure can only be successful if we keep our dialogue going.

In Münster, we had also an important discussion on Iran. Protests are continuing following the killing of Mahsa Amini. We admire the bravery of the Iranian women who are at the forefront of the peaceful protests. I passed this message very clearly to my counterpart, Minister Abdollahian during our call last Wednesday. On 17 October, the EU imposed sanctions on those responsible for the unacceptable violent repression of the protests. The EU also took action following the extremely worrying delivery of Iranian drones to Russia.

Regarding the JCPOA, things are not evolving in the right direction. Positions between the parties are not converging yet. Iran must engage with the International Atomic Agency in a constructive way. I urged Minister Abdollahian to take this forward.

In Münster, we were joined by our counterparts from Kenya and Ghana as well as the Deputy Chairperson of the African Union Commission. We underscored the geopolitical and strategic importance of the African continent and the need for close cooperation with our African partners. Africa is particularly affected by multiple global crises such as the climate crisis, the still ongoing COVID-19 pandemic, democratic backsliding plus food and energy insecurity as consequences of Russia’s war of aggression against Ukraine.

“Africa is particularly affected by multiple global crises such as the climate crisis, the still ongoing COVID-19 pandemic, democratic backsliding plus food and energy insecurity”

Specifically on Ethiopia, we should not forget the tens of thousands of people who were killed and those who were victims of the worst atrocities as we enter the 2nd year of this conflict. Human rights violations, atrocities and abuses must cease immediately. Perpetrators of these violations and abuses must be held to account; survivors and victims must obtain justice. Last week there was some positive news with the announcement of a cessation of hostilities. We welcome it and urged the Government of Ethiopia and the Tigray People’s Liberation Front (TPLF) to fully honour and implement this commitment.

“African societies continue to suffer from Russia’s weaponization of food and fertilisers’ exports.”

More broadly, African societies continue to suffer from Russia’s weaponization of food and fertilisers’ exports. We cannot afford to be losing ground, so we will continue to work with our African partners to build resilient and sustainable agri-food and energy systems, mitigate climate change, and address disinformation.

The basis for joint action with our African partners are the priorities and deliverables agreed at the EU-African Union Summit last February, notably the Africa-Europe Global Gateway Investment Package. In this area, it is important that we realise synergies with G7 initiatives, such as the Partnership for Global Infrastructure and Investment.         Africa is diversifying its partners, and we are engaged in a competition of offers.

Finally, a word on the Western Balkans, as I participated also last week in the Berlin Process Summit, hosted by Chancellor Scholz. We have to advance on both resilience and reconciliation in the region. On resilience, we have announced at this event a €1bn energy emergency support package. We also need to step up our help to improve cyber resilience for those countries in the region that are most exposed to threats by Russia. We are also working to strengthen the fight against Russian disinformation in Western Balkan.

With the war ongoing in Ukraine, we need to help avoid any new conflicts to erupt in Europe. In recent months we saw recurring tensions between Kosovo and Serbia, notably on the issue of license plates. As facilitator of the Belgrade – Pristina Dialogue, supported by EUSR Miroslav Lajcak, I presented a proposal to the parties to make concrete and irreversible progress on the road to comprehensive normalisation. I am grateful in particular to Germany and France for their support to this proposal. Discussions on this proposal are ongoing with both parties. We urge Kosovo and Serbia to take a historic leap forward in normalising their relations.

These useful meetings have shown the extent of convergence between the G7 countries on the main geopolitical challenges. Together we must continue to defend the rules-based international order.