Geoeconomics and geopolitics of the COVID-19 crisis

HR/VP Blog – The Covid-19 crisis continues to change the global balance of power. The new IMF economic forecast shows that the recovery is underway even if uncertainties remain. However, the gap between emerging and developing countries and the advanced economies plus China is worrying. The EU is also at serious risk of falling behind the US and China if it does not develop active policies to prevent this. 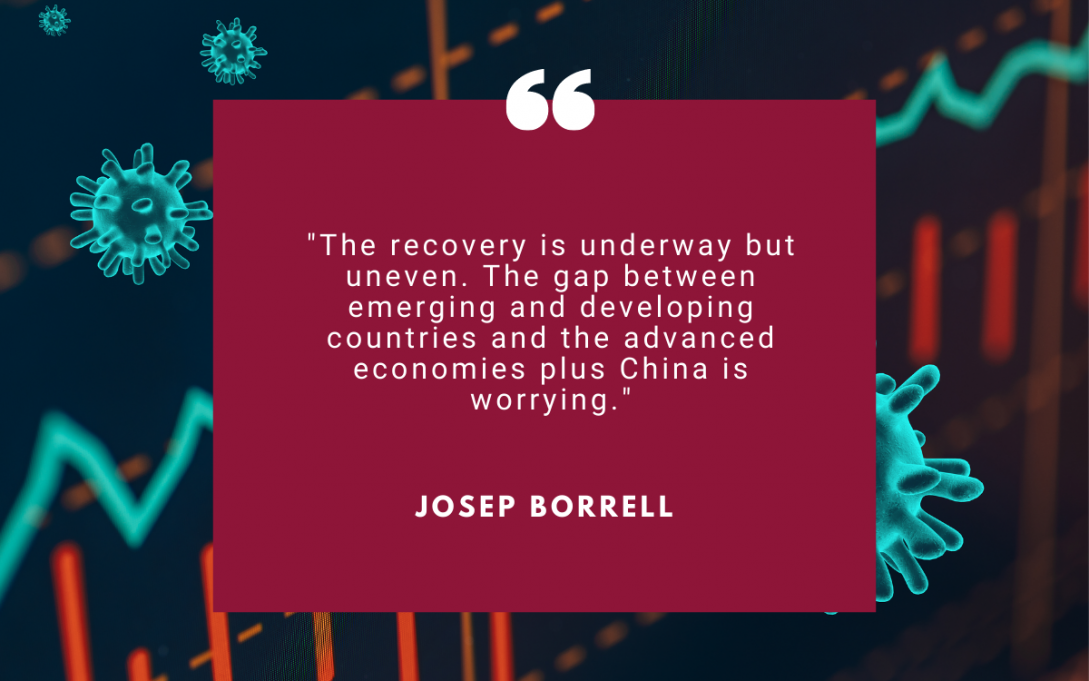 The pandemic has triggered the most serious and global crisis since the Second World War. It will significantly shift the geopolitical balance of the world. There are still many uncertainties, however, after one year, clear trends are beginning to emerge. They are important to understand to adapt European foreign policy to this new context.

“In spite of our actual concerns, the news that the IMF brought was rather good: the economic recovery seems to be solid.”

Last week, the International Monetary Fund (IMF) and the World Bank held their traditional Spring meeting. On this occasion, the IMF released its World Economic Outlook. In spite of our actual concerns, the news that the IMF brought was rather good: the economic recovery seems to be solid even if there are still many uncertainties linked in particular to the new COVID-19 variants (see following figure). According to the IMF, the recovery should be faster than expected in previous forecasts. This is due in particular to a marked upturn in industrial activity and international trade in goods as the IMF report describes. Last January, manufacturing output was back to its January 2020 level and international trade was significantly higher than one year before.

“The recovery remains quite uneven. China returned to pre-crisis activity levels in 2020. The US is expected to do so in the first half of 2021, Japan in the second half and the EU in 2022. However, many low-income countries will only return to pre-pandemic levels in 2023.”

However, this recovery, even if stronger than expected, remains quite uneven. According to the IMF, China returned to end-of-2019 economic activity levels in 2020. The US is expected to do so in the first half of 2021; Japan in the second half of 2021; and the EU in 2022, already quite late. However for many emerging and low-income countries the situation is even worse and they will only return to pre-pandemic levels in 2023.

The poorest countries will be lagging behind: according to IMF estimates they will have lost in 2022 6.4% of their GDP per capita compared to what was projected in January 2020, while the emerging countries (excluding China) will have lost almost 6%. At the same time, the  advanced economies will have lost "only" a little less than one percentage point (see the following figure from the IMF report). In the medium term, the IMF considers that the United States will have become richer in 2024 than expected in January 2020, while emerging Asia (excluding China), Latin America and Sub-Saharan Africa will have lost the most from the COVID-19 crisis. China itself will also remain slightly handicapped.

These differences are due to how effective countries have been in tackling the health aspects of the crisis, especially the speed of the vaccination roll-out, combined with the size of their economic policy support.

“Europeans have often complained recently about the delays in the vaccination roll-out in the EU, and, indeed, we have encountered significant difficulties. However, the situation is much worse in most emerging and developing countries.”

Europeans have often complained recently about the delays in the vaccination roll-out in the EU, and, indeed, we have encountered significant difficulties. However, the situation is much worse in most emerging and developing countries as the IMF report figure shows. The people in most low income countries will not be vaccinated before 2022. Hence, the importance of the EU's work to enhance world vaccines production capacity and to help the poorest countries gain rapid access to vaccines including through the international COVAX initiative. We have been until recently the first contributor to COVAX with €2.2 billion. The recent decision by the United States to join COVAX should help accelerate the global roll-out of vaccines.

“Our ability to help vaccinate the whole world remains a central issue for our external policy. It is not just a matter of solidarity; it is also in our own interest”

Our ability to help vaccinate the whole world remains a central issue for our external policy. First because demonstrating our solidarity will influence the future attitudes of many emerging and developing countries toward the EU, but also because our own health depends on it due to the risk of new variants emerging in the unvaccinated parts of the world – and then coming to Europe. Once again, it is not just a matter of solidarity; it is also in our own interest.

“Investing in the production and distribution of Covid-19 vaccines worldwide is the most important immediate public spending priority.”

Investing in the production and distribution of Covid-19 vaccines worldwide is therefore the most important immediate public spending priority. According to Vitor Gaspar, the IMF’s head of fiscal affairs: “Vaccination is likely to be the global investment project with the highest return ever considered”. Vaccinating the world will cost tens of billion dollars but it should boosts growth prospects sufficiently to raise tax revenues in richer countries alone by $1 trillion by 2025. In other words, what governments spend on vaccinations will pay for itself many times over.

The ability to mobilise public finance

The other reason for the gap between advanced and emerging and developing countries in the speed of recovery is the ability to mobilise public finances. All countries have seen their governments' revenues fall significantly in 2020. However, this has not prevented the richest countries from significantly increasing their public spending at the same time (by 6 % in average according to the IMF). Emerging countries have also done so, but to a much lesser extent (less than 1 %). While low-income countries have had on the contrary to lower slightly their public spending.

This is why we have developed the Team Europe initiative over the past year in cooperation with our member states and financial institutions, in particular the European Investment Bank and the European Bank for Reconstruction and Development, to help our partners worldwide to deal with the pandemic. We have mobilized until now €38.5 billion for this purpose.

“Despite already high levels of public debt before the crisis, the richest countries have been able to significantly increase their debt level last year, thanks to the monetary policies implemented by their central banks. That was not the case for the rest of the world.”

This difference in capacity to mobilise public expenditures is linked in particular to differences in the financing conditions. Despite already high levels of public debt before the crisis, the richest countries have been able to significantly increase their debt level last year while debt servicing continues to decrease as a share of GDP thanks to diminishing interest rates, as a result of the very expansionary monetary policies implemented by their central banks. That was not the case for the rest of the world.

Therefore, it is essential to ensure in coming months adequate access to international liquidity for all. Low-income countries in need will benefit from recently decided, with full EU support, further extension of the pause on international debt repayments under the Debt Service Suspension Initiative (DSSI) until December 2021.

Although several countries "have very high levels of debt vulnerability", IMF Chief Economist Gita Gopinath does not see signs of a "systemic debt crisis" looming. However, the EU is pushing for an effective use of the new G20 Common Framework for orderly debt restructuring that was adopted last year. All creditor countries, including China, should actively participate in this effort in coming months. The recently decided new allocation of $ 650 billion of the IMF’s Special Drawing Right will also provide needed liquidity protection in highly uncertain times, as the EU have been asking for, since many months.

“We see a significant gap in the speed of recovery between China plus advanced economies on the one hand and other emerging and developing countries on the other. It was not the case during the great recession of 2008-2009. This role reversal bears geopolitical risks.”

One year after the start of the pandemic, we see a significant gap in the speed of recovery between China plus advanced economies on the one hand and other emerging and developing countries on the other. This is the most relevant geopolitical issue at this stage. It was not the case during the great recession of 2008-2009: the richest countries suffered then more than emerging and developing ones. This role reversal bears geopolitical risks, if it were to continue. For the future, it is essential that this divergence is not allowed to persist and grow.

A significant gap between US and the EU

However, there is also a significant gap within the advanced economies between the United States and the others, particularly the European Union. This is because the US federal government has much more accelerated its public spending than others. Both in 2020 (as shown in the following figure) and this year with the new $1.900 billion stimulus plan announced by Joe Biden, pending his $2 000 billion dollar multi-year investment plan. As a consequence, GDP per capita in the US is expected to grow by 1.8% between 2019 and 2021 according to IMF, while it should decline by 0.9 % in Japan and 2.6% in the euro area. The big amount of money mobilized by Joe Biden's stimulus plan has raised concerns. It has been criticized by some observers, including Larry Summers, former Treasury Secretary and Olivier Blanchard, former IMF chief economist, because it risks creating higher inflation. Although oil, metal and food world prices are indeed already rising (see following figure), the IMF does not seem to fear a significant rise in inflation in the coming months.

Rather, some observers see a new Washington consensus emerging between the world financial institutions and the American government around economic policy, including the need to use extensively expansionary monetary policy and fiscal spending in the face of the current crisis. Maybe it is too early to characterize it as a “new Washington consensus”, but certainly things have changed compared to previous times, when the fight against inflation and the level of public expenditure were the main concerns of the world financial institutions … In this context, if we want to avoid Europe stalling in comparison to the US and China, it is necessary that EU member states do not relax too early their fiscal support to the economy, as they did in 2010 during the last crisis, while we accelerate the vaccination roll-out. At the same time, we must succeed now in getting the Next Generation EU plan off the ground without additional delay. This is essential not only for the wellbeing and future of Europeans themselves, but also for the EU to have a say in tomorrow’s world affairs. The post pandemic world is being built now.