The devastating explosions that hit Beirut last week killed and injured numerous people and have destroyed major parts of the city and the livelihood of many of its inhabitants. The international community, and in the first place the European Union and its Member States, has reacted quickly to mitigate the immense damage and suffering caused. However, as it is often the case when such disasters happen, the most important and difficult steps lie ahead: what thousands of Lebanese citizens are asking for is to tackle deeper-rooted problems. As a long-time friend of Lebanon, the EU will stand by their sides in their efforts to build a more prosperous and democratic Lebanon.  We owe it to the victims of August 4th. 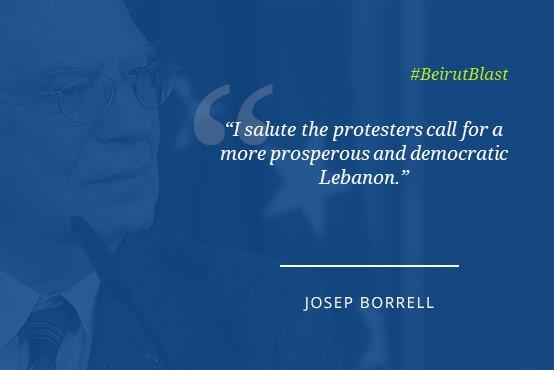 All of us having seen what happened in Beirut were deeply shocked and felt with the people affected by this terrible tragedy: 159 people killed, dozens missing, thousands injured, entire neighbourhoods destroyed and a quarter of a million left homeless. And all of this happened at a time when the Lebanese people were already facing the challenges of the Covid-pandemic and going through a deep economic downturn.

What is needed right now  – and what the Lebanese people rightly expect – is to shed light on the causes of this catastrophe and to mitigate the immediate consequences of the damages caused. For all of this we have swiftly offered European support and expertise. The EU Emergency Response Coordination Centre (ERCC) is coordinating EU and Member States support. More than 250 rescuers from European countries are on the ground, working around the clock with local teams. Tons of emergency supplies have been made available and more will follow. In addition, the ERCC has triggered the satellite mapping capacities of the European Copernicus Emergency Management Service.

The virtual donor conference hosted by President Macron and UN Secretary-General Guterres that took place yesterday was an important step to gather the entire international community around the cause of supporting Lebanon and make sure emergency assistance is coordinated. An amount of around EUR 250 million has been mobilized to cover first urgent needs, including EUR 66 million from the EU.

“Lebanese citizens want fundamental changes to resolve the structural problems the country is facing since years.”

This is a robust signal of international solidarity, but Lebanese citizens want more than solidarity. People in the streets of Beirut have clearly expressed their exasperation. They want a transparent governance to ensure that all aid is directly channelled to the people in need via the NGOs and teams helping on the ground. And they also want fundamental change to resolve the structural problems the country is facing since years.

Protests are a warning call for everybody

I salute the protesters call for a more prosperous and democratic Lebanon. This is a warning call for all of us, the Lebanese authorities and international community alike, that we must listen to.  We need to follow up by quick, concrete and brave steps. If we don’t, it will be impossible to restore trust, a prerequisite for any meaningful reform process. Instead, anger might well turn into violence, causing further disunity and instability. We cannot afford that to happen, neither for the country and its people nor for the region.

“The Lebanese population want to see the fight against impunity and corruption becoming a top priority.”

Beyond efforts to tackle immediate needs, we now have to work on the long-term reconstruction and the profound stabilisation and development of Lebanon. Lebanese want to see substantial reforms of their political and financial system. They want to see the fights against impunity and corruption becoming a top priority. This is also key to unlock EU macro-financial assistance and to conclude an agreement with the International Monetary Fund.

Following the explosions of August 4th, the port of Beirut - the economic lung of the country – has become inoperable. The only alternative is the Tripoli port, which has a lower capacity, while the use of land trade routes via Syria is not feasible. A post-disaster needs assessment will give further information but it seems clear the EU could help mobilize concessional lending and guarantees and play a major role in the reconstruction of the port.

The Lebanese economy was already in a deep crisis

Before last week’s tragedy, the Lebanese economy was already in a deep crisis. Lebanon has been living for too long with a huge current account deficit associated with a tremendous need of capital inflows (ca. 20 % of GDP per year), and a very important public debt (exceeding 150% of GDP). These long-standing difficulties have been significantly aggravated in recent years by the aftermath of the civil war in Syria and in particular, by a large influx of refugees which Lebanon has been (generously) hosting despite its difficulties.

As a result, Lebanon has been suffering from high interest rates, GDP growth has been close to zero since 2011, imports have collapsed by nearly half since 2018, unemployment has grown above 30%, and the poverty rate has risen to 50%. Now both the State and the banks lack liquidity and are unable to borrow, the middle class and human capital are disappearing and many businesses had to shut down. A fundamental economic-reform plan to address those weaknesses is needed.

“Reforms to improve governance, accountability and transparency have to materialise rapidly.”

In addition, the political system as a whole has been facing a severe crisis of legitimacy.  People long for a deep political transformation: reforms to improve governance, accountability and transparency have to materialise rapidly.

Change has to come from the Lebanese society itself

In the coming months, the EU will engage with the Government and civil society to push all stakeholders to renovate the country’s economic and political system. Change cannot be imposed from outside; it has to come from the Lebanese society itself.

It is time for Lebanon’s political elites to work with and for the people to build a more stable and transparent political system and a fairer society. If they are ready to do so, they can count on our full support. When this homework is done in a meaningful, fair and democratic way, and when all actors take their responsibilities, there is hope that last week’s tragedy could be the turning point for Lebanon.