HR/VP Blog - After 15 months of intense, constructive negotiations and countless interactions with the JCPOA participants and the US, the space for additional significant compromises to reach an agreement has been exhausted. Decisions need to be taken now to seize the unique opportunity to succeed, and to free up the great potential of a fully implemented nuclear deal. A restored agreement will strengthen regional and global security and show that balanced international accords are possible in turbulent times. 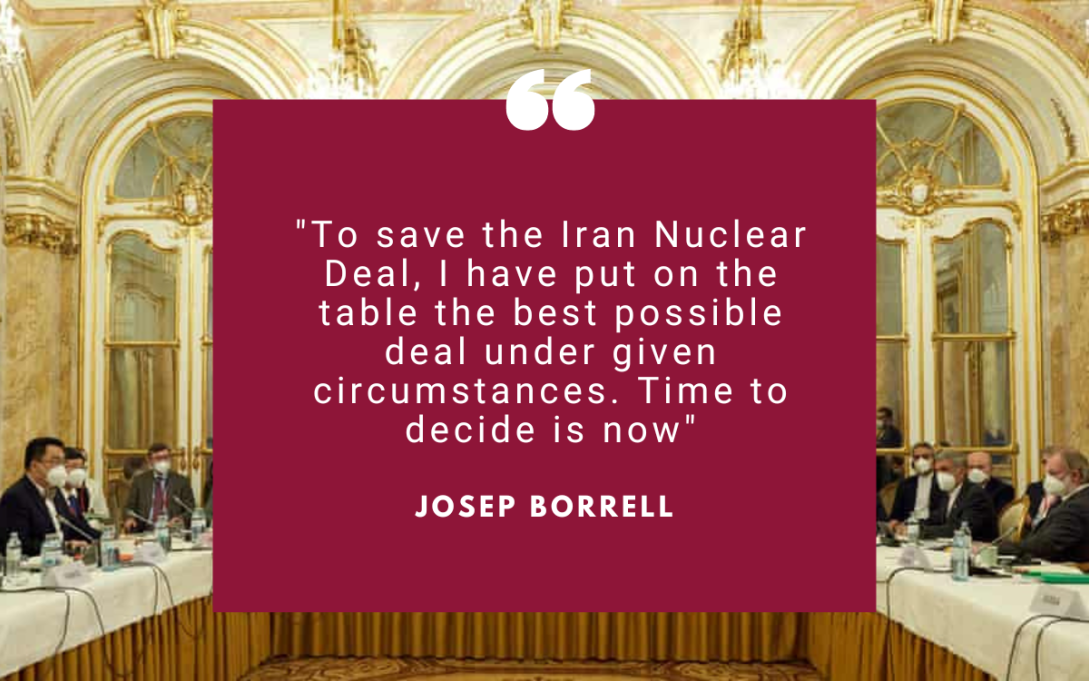 Seven years ago, the five permanent members of the UN Security Council, Germany, Iran and the EU’s High Representative for Foreign Affairs and Security Policy concluded a landmark diplomatic deal. The Joint Comprehensive Plan of Action (JCPOA) was the result of more than a decade of intense diplomacy on Iran’s nuclear programme and won the UN Security Council’s unanimous endorsement. The deal required substantial political will to be concluded in 2015, particularly during the last months of the negotiations.

I am proud of the role Europeans have played in bringing the Nuclear Deal about. The European diplomatic engagement goes back to 2003, when the Foreign Ministers of France, Germany and the United Kingdom first travelled to Tehran to discuss nuclear concerns with Iran. My friend and former EU High Representative for Foreign and Security Policy, Javier Solana joined them in 2004. By 2006, he had managed to get all Security Council members to support this effort. Our aim has always been to conclude a deal that is in the interest of all. In the interest of Europe, in the interest of Iran and in the interest of the international community. And we all achieved just that. We concluded the JCPOA in July 2015, we implemented it and preserved it.

The agreement secured strict limits on Iran’s nuclear activities and the most extensive monitoring and inspection regime ever implemented by the International Atomic Energy Agency.

The agreement secured strict limits on Iran’s nuclear activities and the most extensive monitoring and inspection regime ever implemented by the International Atomic Energy Agency (IAEA). The entry into force of the JCPOA resulted in a massive drop in Iran’s enriched uranium stockpile by 98% and the removal of thousands of centrifuges. In addition, Iran’s provisional application of the IAEA Additional Protocol and the other JCPOA transparency provisions allowed the IAEA to inspect every site in Iran it wanted to, at any time. The restoration of the JCPOA would bring all the limitations on Iran’s nuclear programme back in force. In return, it opened up the prospect of benefiting economically from the lifting of US, EU and UN sanctions to Iran.

The full implementation of this deal has been severely affected by Donald Trump’s decision in 2018 to withdraw the US from it and to pursue a unilateral “maximum pressure” campaign. The EU and all the remaining JCPOA participants have been very clear how much we disagree with the US withdrawal and the re-imposition of sanctions. We have done so publicly, individually, collectively, and multilaterally, at the UN. For its part, Iran has ratcheted up its nuclear activity to alarming levels. Regrettably, it has also limited IAEA monitoring, while failing to co-operate fully with the agency under its basic safeguards’ obligations. “Maximum pressure” failed as the collective unity of the remaining participants kept this deal alive.  It is now more important than ever to continue doing so.

It is now more important than ever to continue doing so.

Despite the best efforts of the remaining participants, including the European unique and voluntary scheme of INSTEX aimed at facilitating legitimate trade with Iran, the US departure dramatically reduced the expected economic benefits for Iran, which is why the deal could never develop its full potential. Meanwhile, the people of Iran have been deprived of the full benefits of the sanctions lifting. The Iranian economy has suffered - and above all – the Iranian people have suffered. We clearly recognise this.

To reverse this dangerous escalation, in my capacity as JCPOA co-ordinator and based on the mandate of the UN Security Council Resolution 2231, I seized the political momentum of a new US administration to launch in April 2021 a diplomatic process involving the JCPOA participants and the US. The aim was to facilitate a US return to the deal and full US and Iranian implementation of their JCPOA commitments.

After the first six negotiation rounds until June 2021, the meetings in Vienna were suspended until late November 2021, to give the opportunity to a newly elected Iranian president and government to clarify their negotiation positions and teams. While the following 7th and 8th negotiation rounds built on the substantive work achieved in summer 2021, it went beyond to find solutions to specific concerns and requests. It was a very detailed and complex work pursued by very committed negotiating teams from all sides in the unique, historical setting generously provided by the Austrian authorities. There has been equally a permanent sense of time pressure framed by the constant advancements of Iranian nuclear programme and the risk that a restored JCPOA could lose its original non-proliferation value.

The space for additional significant compromises has been exhausted.

After 15 months of intense, constructive negotiations in Vienna and countless interactions with the JCPOA participants and the US, I have concluded that the space for additional significant compromises has been exhausted.

I have now put on the table a text that addresses, in precise detail, the sanctions lifting as well as the nuclear steps needed to restore the JCPOA. This text represents the best possible deal that I, as facilitator of the negotiations, see as feasible. It is not a perfect agreement, but it addresses all essential elements and includes hard-won compromises by all sides. Decisions need to be taken now to seize this unique opportunity to succeed, and to free up the great potential of a fully implemented deal. I see no other comprehensive or effective alternative within reach.

We know the JCPOA remains politically polarising in Washington as the midterm elections approach. The deal may not have addressed all US concerns with respect to Iran. The EU shares concerns that go beyond the nuclear issue, such as human rights and Iran’s regional activities. We continuously address them with Iran in bilateral discussions. The JCPOA does not address them and was never supposed to do so. It did, however, provide the benefit of winding down the previously expanding Iranian nuclear programme and opening it up to strict IAEA monitoring and inspections. This makes it a cornerstone of the global non-proliferation architecture. Restoring the full implementation of the agreement now can deliver on these benefits again, including through strict limitations on Iran’s uranium enrichment capacity and close monitoring by the IAEA. It can also help bring about a more co-operative security dynamic in the region, creating a positive momentum of confidence building.

We know, too, that in Tehran there are significant reservations over fully implementing a deal after the negative experience of recent years. The deal on the table reflects, however, the determination of all JCPOA participants to ensure its sustainability, including the commitment of President Joe Biden and US assurances in this regard. As a result, the deal is better protected from potential unilateral moves to undermine it.

Concluding an agreement now will deliver significant economic and financial dividends as well as strengthen regional and global security.

Every day with no agreement in Vienna postpones concrete economic benefits to the Iranian people through substantial US sanctions lifting, as well as the benefits of non-proliferation for the world. Concluding an agreement now will deliver significant economic and financial dividends as well as strengthen regional and global security. Rejecting it assures a loss on both accounts — who knows for how long. It is now time for swift political decisions to conclude the Vienna negotiations on the basis of my proposed text and to immediately return to a fully implemented JCPOA.

The deal serves the cause of non-proliferation in return for sanctions lifting, showing that in turbulent times balanced international agreements are still possible. If the deal is rejected, we risk a dangerous nuclear crisis, set against the prospect of increased isolation for Iran and its people. It is our joint responsibility to conclude the deal.