Libya: a glimmer of hope

04/09/2020 - On Tuesday, I visited Libya, meeting the authorities of the war-torn country. Shortly after the ceasefire understanding announced on 21 August, the aim of the visit was to explore further support the EU can provide to implement this ceasefire and help resolve the Libyan conflict. There is a glimmer of hope that we need to build on. 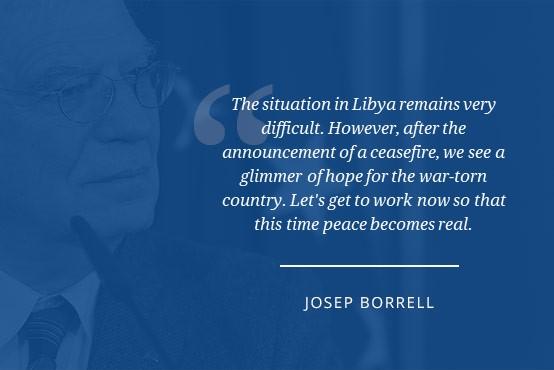 Since the 2011 Arab Spring, Libya – a country of 6.7 million inhabitants, potentially very rich with immense oil reserves – has been beset by violent conflicts between different factions and militias, as well as outside players and actors.

The Libyan people have suffered enormously and the instability in the country has had negative spill over effects on regional security, affecting neighbouring countries and the whole Sahel region. The country also served as a major route for people trafficking and irregular migration to Europe. Only a few kilometres away from the European coast, this chronic instability has long been a major concern for the EU.

“Only a few kilometres away from the European coast, the Libyan chronic instability has long been a major concern for the EU.”

In April 2019, when General Khalifa Haftar of the so-called Libyan National Army, controlling the Eastern part of the country, started a military offensive, the armed conflict saw another culmination point. Shortly after, Ghassan Salame, then UN Special Representative for Libya and head of the United Nations Support Mission in Libya (UNSMIL), proposed an elaborated peace plan. The plan called for a ceasefire and an internal dialogue between the warring Libyan parties. This plan was accepted by General Haftar and the Government of National Accord (GNA) led by President Faiez Serraj and based in Tripoli.

The “Berlin process” to forge international unity for peace

To actively support the UN-led mediation process and since any solution depended on the buy-in of the international actors involved, Germany initiated the “Berlin process” to forge the necessary international unity in favour of peace in Libya. The process led to a conference in Berlin at the beginning of 2020, which adopted a 55-point declaration specifying the different elements of a possible agreement and establishing an internationally supported process to contribute to ending the conflict. It created three parallel tracks: a military track with a 5+5 group tasked to elaborate modalities for a ceasefire, a political track with a group of representatives from both the East and West and civil society to work on a political solution, as well as an economic track with experts working on the economic challenges to be addressed.

Foreign interference on the ground has multiplied in recent months: the conflict parties continue to receive arms, mercenaries and financial support, and some countries even sent troops or threatened to do so.

Unfortunately, these processes have not yet led to sustainable agreements and peace. Foreign interference on the ground has multiplied in recent months, including notably by Turkey, Russia, the United Arab Emirates and Egypt, backing different sides of the conflict. In violation of the United Nations arms embargo, the conflict parties continue to receive arms, mercenaries and financial support, and some countries even sent troops or threatened to do so.

The Libyan people, faced with very difficult living conditions aggravated by the Covid-19 outbreak, are exasperated by the continuing civil war.

Fighting also led to a prolonged freeze on the Libyan oil production and exports, which is the main source of revenue for the country. The Libyan people, faced with very difficult living conditions aggravated by the Covid-19 outbreak, are exasperated by the continuing civil war.

A rare piece of good news

In August of this year, a rare piece of good news came when President Faiez Serraj and Aguila Saleh, Speaker of the House of Representatives, based in Eastern Libya, agreed to call for a ceasefire and unblock the oil production. We immediately welcomed this initiative. However, it remains unclear to what extent this agreement will be implemented in practice by the two sides, and the understanding has not yet found the support of General Haftar.

This is the context in which I visited Libya to observe first-hand the situation, to discuss the possible way forward for an effective implementation of the ceasefire, and to help to put the Berlin process back on track.

In my meetings with President Faiez Serraj, Speaker Aguila Saleh and the National Oil Corporation Chairman Mustafa Sanalla, we discussed ways for making the political efforts successful, and for lifting the blockade on oil production and exports.

The critical importance of oil production and exports

The latter is highly relevant: in 2019, Libya produced 1,2 million barrels of oil per day,  but currently the production has almost fully stopped. If Libya were to return to its normal production level, this would enable it to earn at least €10 billion each year.

As EU, we want Libya to preserve its territorial integrity and Libyans to decide their own future, free from external interference

I underlined the EU’s commitment to help rebuilding Libya, which is also in our very own interest. As EU, we want Libya to preserve its territorial integrity and Libyans to decide their own future, free from external interference. A stable and peaceful Libya could be a solid partner for the EU and the region to collaborate effectively on economic development, energy, trade, security, education, and migration.

We also discussed EU naval Operation Irini, which monitors the arms embargo in the Mediterranean in line with a UNSC mandate. So far, Irini has conducted more than 600 hailings of vessels to control the arms embargo and related to oil smuggling. It has shown its ability to document and monitor violations on both sides and has proven its deterrence effect, preventing attempts to smuggle Libyan oil outside of the NOC's control from terminals in the Tobruk region.

I was encouraged by all my interlocutors’ commitment to the Berlin process as the way out of the stalemate, and the shared desire to ensure that foreign fighters leave the country.

The situation in Libya remains very complex and difficult. However, we see a glimmer of hope and I was encouraged by all interlocutors’ commitment to the Berlin process as the way out of the Libyan stalemate, and the shared desire to ensure that foreign fighters leave the country.

Even though we are well aware of the magnitude of the task ahead, I return from this trip more optimistic for Libya's future. Let's get to work now, in close connection with the UN and all relevant players, so that this time the chance for peace becomes real.

Over 4 million girls at risk of mutilation