Multilateralism Day, cooperation is the only path and a common responsibility

No one is safe alone, no one is strong alone; we are stronger together. 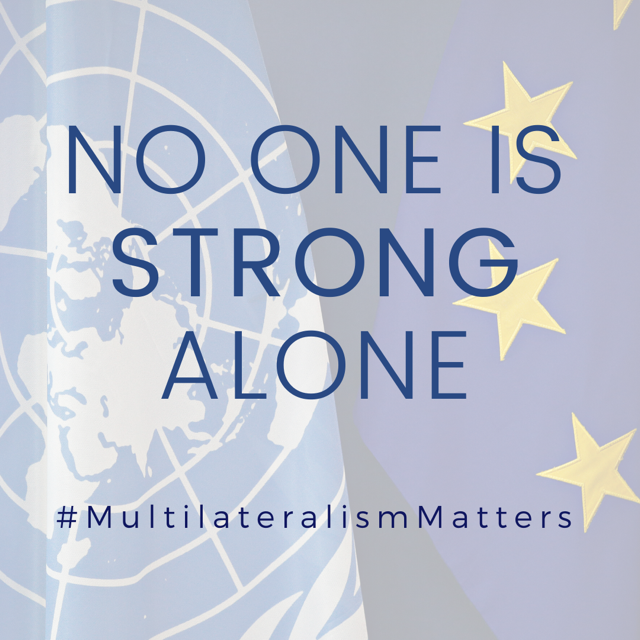 The coronavirus pandemic has exposed the many weaknesses of our world, but also revealed our greatest strength: cooperation. We mark today, April 24, the International Day for Multilateralism while collectively experiencing challenging times. True to its founding principles, the European Union is determined to further strengthen its engagement with multilateral partners. The coronavirus has taught us that without collective action, without solidarity, empathy and joint work, it would be impossible to tackle any global challenge.

“As we tackle the biggest global health crisis of our generation, the European Union reaffirms its longstanding commitment to international cooperation and to the rules-based international order, with the United Nations at its core. The coronavirus pandemic reminds us how interconnected we are and how crucial multilateral cooperation is”, said the High Representative Josep Borrell on the occasion of the International Day for Multilateralism.

In our interconnected and challenging world, we rely on the rules-based international order, commonly agreed rules and effective and inclusive global institutions, within and beyond the United Nations (UN) system, to ensure peace, security, human rights, prosperity and sustainable development for all.

“Multilateralism is the only effective way to face a threat with which no country can cope on its own and which affects us all. Nobody will be safe in any country as long as the pandemic rages in different parts of the world. Today is an opportunity to express our appreciation for the work of the United Nations in responding to the crisis”, commented the HRVP Borrell who has been in contact with United Nations Secretary-General, António Guterres, and with the director general of the WHO, Tedros Adhanom Gebreyesus. “The World Health Organisation plays a critical role in containing the spread of the virus. The European Union will continue to support this work, including financially. Collectively, the EU and its Member States are the largest donor to the WHO. In 2019, the EU institutions alone provided 146 million euros in funding and we have already committed 114 million euros to the UN Strategic Preparedness and Response Plan led by the WHO for countries with weak health systems”, he said.

This year’s International Day of Multilateralism is particularly important as at the same time we mark the 75th anniversary of the United Nations and the 70th anniversary of the Schuman declaration. The UN is introducing the 75th anniversary campaign “at a time of great disruption for the world, compounded by an unprecedented global health crisis with severe economic and social impacts. Will we emerge stronger and better equipped to work together?” Even though the answer is not known yet, one thing is certain: the EU will remain a staunch supporter of the UN system.

It is worth recalling the main achievements related to EU-UN cooperation:

Collectively, the EU and its Member States are the single largest financial contributor to the UN system (aven after Brexit). In 2019, the contributions of the then 28 EU Member States to the UN regular budget amounted to 754 million euros, around 29% of the regular UN budget. In 2019, the EU Member States were also the largest contributor of the UN peacekeeping budget at 29.64%, meaning 1.7 billion euros.  Moreover, the EU and the UN have a successful track record of close cooperation in crisis management around the world and 12 of the EU missions and operations are deployed in parallel with UN missions on the ground, in regular coordination, from the Sahel to Kosovo, from Somalia to Iraq. Preventing crisis and overcoming crisis, upholding human rights, fundamental freedoms and the international humanitarian law, as well as recognizing and promoting the central role of women in peace and security are at the core of the EU-UN partnership also in the field.

In 2019, we commemorated another important anniversary: the 70th of the Council of Europe. The EU will continue to work with and support the Council of Europe, as part of its commitment to promote effective multilateralism and uphold the rules-based international order, not least in the context of the socio-economic and human rights impact of COVID-19. The EU and its Member States are the biggest financial contributors to the Council of Europe, value its wide membership and share its vocation to secure universal and effective recognition of human rights and fundamental freedoms, to promote democracy and the rule of law.

A strong cooperation is also at the core of the European Union’s partnership with the African Union, the Organisation of American States, the Association of Southeast Asian Nations. The European Union is linked to Africa, to America and to Asia by historic bonds, by opportunities but also by many of today's challenges. The EU has progressively built solid strategic and political partnerships with these regional multilateral organisations, anchored in reciprocal commitments, based on shared values and interests, on sustainable development, on climate change and on security.

“This crisis has reconfirmed that multilateral cooperation is the only path. It is our collective responsibility to work together to this end for future generations. We owe it to the victims of the Coronavirus “, concluded the HRVP Borrell.