In September 2022, Operation EUNAVFOR MED IRINI investigated 156 merchant vessels via radio calls (out of 7.298), carried out 18 visits on ships with Masters’ consent (out of 385). The Operation also monitored 38 suspect flights (out of 1010) and continued to monitor 25 airports (and landing strips) and 16 ports (and oil terminals). 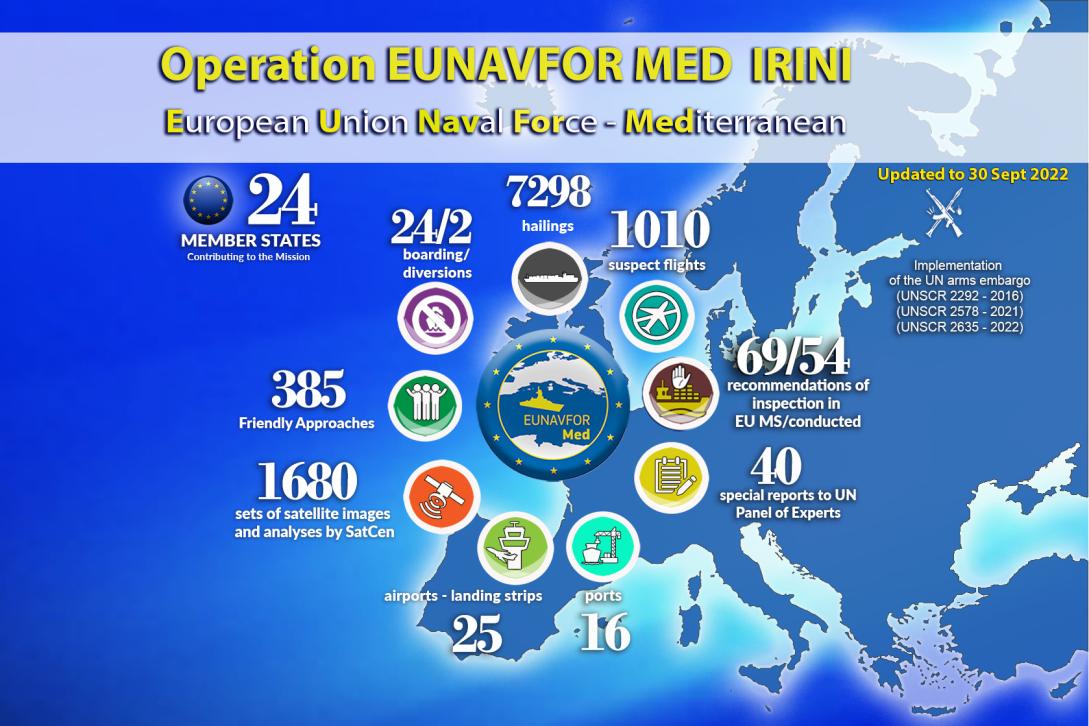 Operation EUNAVFOR MED IRINI tasks are:
•    to counter illegal arms trafficking, supporting the implementation of the arms embargo on Libya based on the relevant UN Security Council Resolutions;
•    to gather information on oil smuggling, in particular, due to its consequences on the Libyan economy and its possible use to finance the arms market;
•    contribute to the disruption of the migrant smuggling business model by collecting information with aerial assets and sharing it with FRONTEX and relevant national authorities;
•    support the development of Libyan Coast Guard and Navy’s Search and Rescue Capacity through training.

Since its launch, Operation EUNAVFOR MED IRINI has boarded and inspected 24 suspect vessels. Two vessels out of 24 were diverted to a port of an EU Member State where their cargo was seized. One flag State (Turkey) has denied consent to board and inspect suspect vessels on eight occasions. Operation IRINI has also investigated 7,298 merchant vessels through requests of information via radio calls (hailing) and visited 385 vessels upon their Masters’ consent (so-called friendly approaches).

Furthermore, the Operation has investigated 1010 suspect flights, 25 airports and 16 ports, and provided 40 special reports to the UN Panel of Experts on Libya, most of which referred to violations or possible violations of the arms embargo and oil smuggling activities in the West and in the East of the Country. Finally, through the embedded Crime Information Cell, the operation issued to the relevant Law Enforcement agencies 69 recommendations for inspection of suspect vessels in EU Member States’ ports, 54 of which were conducted.

Inspections or friendly approaches are always carried out in accordance with the relevant UN Security Council Resolutions framework, in full respect of international law, without undermining the vessels’ schedule of activities. Furthermore, all COVID-19 preventive measures are always implemented during these activities. (data updated up to 30 September 2022).