The 47th session of the Human Rights Council (HRC47) took place once again in the context of the global pandemic and was hence a timely opportunity to look at the situation of human rights in this current climate. COVID-19 not only impacts the enjoyment of economic, social and cultural rights, but also of civil and political rights. At this session we strongly reminded that Government action needs to be necessary, proportionate and non-discriminatory, and we specifically invited all governments to strengthen and further expand universal social protection mechanisms. 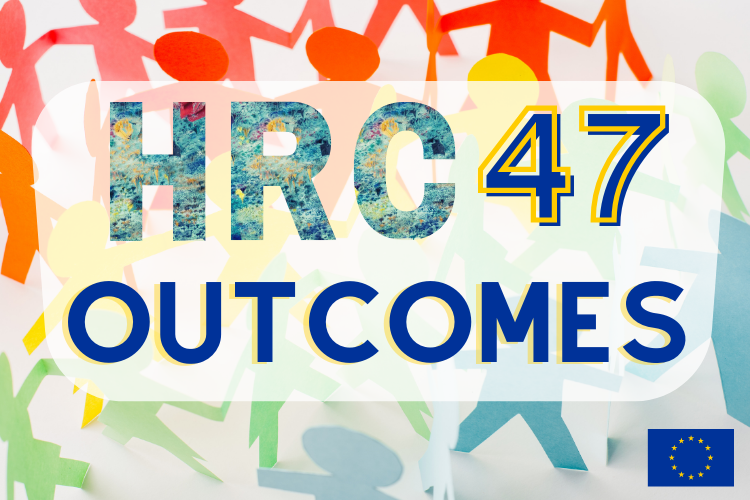 “What is happening in the Tigray region in Ethiopia, is appalling. We are seeing a series of international humanitarian law and human rights violations, atrocities and ethnic violence, combined with allegations of use of starvation and sexual violence as weapons of war. It is time for the international community to take action,” said Ambassador Lotte Knudsen, Head of the EU Delegation to the UN in Geneva. “It is imperative for the Human Rights Council to be able to address this situation. That is why the EU has presented a resolution that requests the High Commissioner for Human rights to inform the Council about the situation on the ground, as well as about the ongoing investigations her Office is undertaking with the Ethiopian Human Rights Commission. The international community has the right to be informed.”

In Belarus the human rights situation continues to deteriorate with repression of civil society and independent media, including politically motivated arbitrary detentions and arrests, the systematic use of torture and dire detention conditions, and reported cases of enforced disappearance. The EU has therefore led a resolution at HRC47 to extend the mandate of the Special Rapporteur. “The violent repression of civil society, democratic opposition and journalists has reached a new level and scope,” stated EU Ambassador Knudsen. “We will not stop to push for accountability for this brutal repression by the Belarusian authorities. We owe it to the people of Belarus,” she said.

We also presented a resolution at this HRC session to renew the mandate of the Special Rapporteur on Eritrea. We believe the human rights situation in the country requires continued monitoring. There are also ongoing concerns about the practice of indefinite national service in Eritrea, the many cases of arbitrary detention and forced disappearances and the severe restrictions on the rights to freedom of religion or belief, freedom of expression and freedom of peaceful assembly and association. Against this background the mandate of the Special Rapporteur is needed more than ever.

The EU managed to keep the dire human rights situation in Myanmar high on the agenda, despite attempts by some HRC members to silence this discussion on procedural grounds. We seized every opportunity to call on the Myanmar armed forces to restore democracy and immediately halt violence and the use of force against civilians. Arbitrary arrests and the torture of detainees must end. “Since the coup, the Myanmar junta and its security forces have increased their brutal repression of peaceful protests across the country, leaving large scores of unarmed citizens dead or wounded. Through its actions, the security forces have shown a blatant disregard for international law, and must be held to account,” urged EU Ambassador Knudsen.

The EU and its Member States also provided full support to Joint Statements on the human rights situation in Venezuela, in Nicaragua, as well as to the UN Guiding Principles on Business and Human Rights (UNGPs).

Over 70 countries joined the EU-led Joint Statement at this session of the Human Rights Council to raise international awareness and understanding of the profound interdependence between human rights, a healthy environment and combating climate change. "We need to systematically integrate human rights in the global action to reverse biodiversity loss, and combat climate change and desertification and drought. This is especially relevant now, in view of upcoming UN Climate Change and Biodiversity Conferences which are expected to set the global agenda on these issues for the decade to come," said Ambassador Lotte Knudsen. The statement also calls on all States to ensure full protection of environmental human rights defenders who are facing threats and attacks.

Women are paying a disproportionate share of the burden resulting from the socio-economic impact of COVID-19. It was therefore important and timely that the Council addressed the economic empowerment of women in the post pandemic recovery during its Annual Discussion on Women’s Rights, where we advocated for national recovery plans to be gender-responsive. We also led a Joint Statement on the human rights of women with disabilities together with the non-aligned movement. In line with our steadfast commitment to the importance of women’s rights, we took a strong stance throughout this session for gender-responsive language in all resolutions.