HR/VP Blog - Every year since 2001, I have been organising a summer course named “Quo vadis Europa ?”at Menendez Pelayo International University in Santander in Spain. Russia’s aggression against Ukraine and its many consequences formed of course the focus of this seminar this year. Throughout the week, we discussed how the EU could, in this difficult context, enhance its effectiveness and make a reality of its aims to be a geopolitical player. 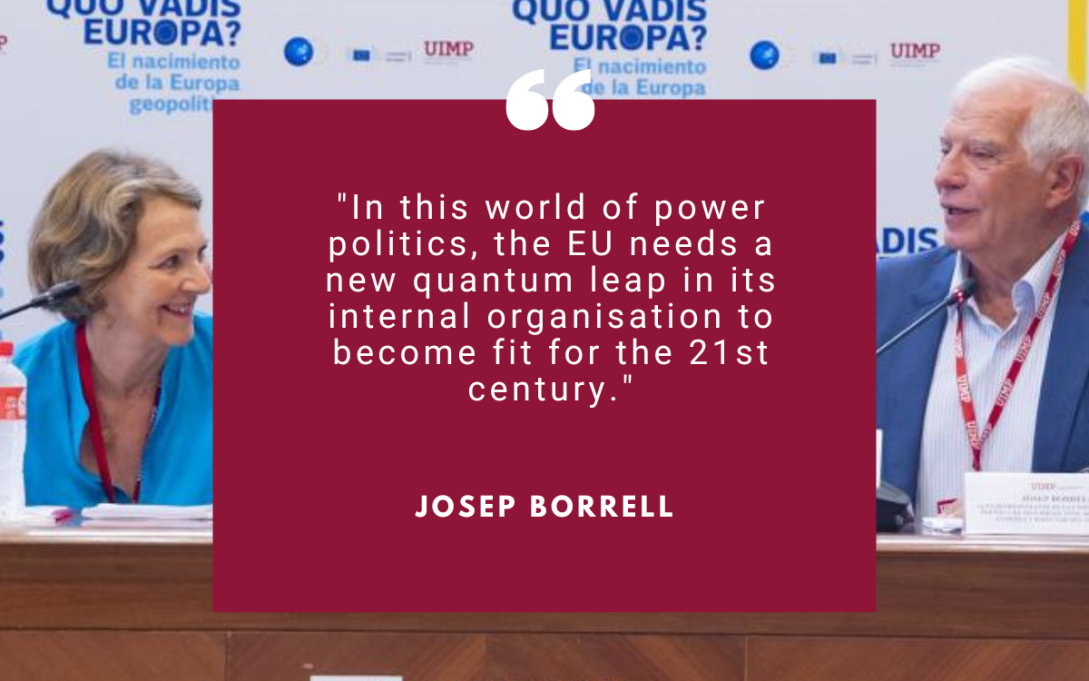 This seminar is an opportunity for me to take a step back from the immediate crises that usually require all my attention during the year and reflect on the main issues at stake for the foreign policy of the EU with eminent specialists in their respective fields. It helps to determine what we can best do to address them.

This seminar takes place in a former royal palace transformed into a university by the Spanish Republic in 1932, 90 years ago. It is not a closed-door exercise, reserved for a few handpicked persons. It brings together around one hundred people of all ages and conditions. The speakers are international and diverse, including policy makers, think tank researchers, academics and journalists. I wish to make these debates available to all those interested in understanding the challenges and choices that the EU is facing in its foreign policy. That is the reason why I present here my main takeaways of the roundtables we had, giving access to the corresponding videos for those who want to check the full debates.

We opened this seminar with a dialogue between Sylvie Kaufmann, editorial director of Le Monde in France, and myself on the main issues at stake in the current period for Europe. I underlined the need for us to be more flexible and resilient to deal with unforeseen scenarios. As EU, we have to use less wishful thinking and be more aware of the power political dynamics that dominate today’s world. We need to be able to shape events and equip ourselves with the necessary means instead of mostly responding to decisions of others. In that respect, I developed the analysis of the triple crisis that is currently dominating the global debate – of food, energy and debt - and what we have to do to deal with these issues.

In the current war against Ukraine, Europeans have been able to count on the massive commitment of the United States, but we cannot afford to depend so much on others for our defence and security in the future.

With Nathalie Loiseau, Chair of the Security and Defence Committee of the European Parliament and Jana Puglierin director of the Berlin office of European Council on Foreign Relations, we discussed the situation and future of European defence in the context of Putin’s war. It was clear to all participants in this panel that European defence is too weak. In the current war, we have been able to count on the massive commitment of the United States, but the external threats will persist and we cannot afford to depend so much on others for our defence and security in the future. We must spend more on our defence but above all spend better, by coordinating our efforts to make up for missing capabilities and by standardising our equipment so that we can develop it jointly and avoid duplication.

We continued with the journalist Catherine Belton, author of the book Putin's People, Carmen Claudin, from CIDOB in Barcelona and Andrei Kolesnikov, from the Carnegie Centre in Moscow to understand the dynamics in Russia and the nature of the threat posed by Putin to Europe. It was clear to all participants that the hostility of Putin’s regime toward the EU and our democratic values was the result of a longstanding dynamic based on authoritarianism, a desire for revenge and an imperialistic worldview. To defend the very existence of the democratic EU and the basic principles of the international order, we cannot afford to let him win in Ukraine. However, it was also clear, that at this stage, due in particular to its tight control over information, Putin has still a quite large support inside Russian society, although the solidity of this support should not be overestimated.

To defend the very existence of the democratic EU and the basic principles of the international order, we cannot afford to let Putin win in Ukraine.

With Mikko Huotari, from the Mercator Institute in Berlin, Susana Malcorra, former Foreign Minister of Argentina and Jose Antonio Sanahuja, Director of the Carolina Fundacion in Madrid, we discussed the situation in China and the China-Russia link and at the same time the dynamics at work in the so-called "Global South". Although there are many differences with the "Cold War" period, due to the strong economic interdependence between China and the West, one should not underestimate the effects of the desire for "decoupling" on the side of both China and the US. In addition, the China-Russia alliance seems solid, with China being increasingly the stronger player. As for the rest of the world, the effects of old anti-imperialist and anti-colonialist resentments remain powerful. They were reinforced during the pandemic by the perception that developed countries were seen as trying to hoard vaccines and as not doing all they could to help the Global South to deal with COVID-19. We clearly have a lot of work to do to convince people and governments in the Global South.

In the following session, Hans Kribbe, political consultant and author of The Strong Men and Jaume Duch, director general for communication at the European Parliament, discussed the ongoing global “battle of narratives”. Both underlined that the EU is currently not very well equipped to carry out this battle. Times have changed and the appeal of democratic values is no longer universally widespread: authoritarian states have successfully built up and “sold” an alternative narrative. We need to better understand the worries and critics of others and clarify the narrative we want to spread. We need to do our homework to define more clearly what kind of world we want to build and the role Europe wants to occupy in it.

My colleague, Commissioner Breton, then did us the honour of coming to discuss the global battle for technological hegemony. He gave a comprehensive overview of the challenges we face in terms of external dependence on semi-conductors and high technologies but also on energy and raw materials, underlining the importance of securing and diversifying our supply chains. However, he also wanted to reassure Europeans of our potential in high-tech, not only in terms of regulation due to the size of our market, but also in terms of research and development and industrial capacity. One clear example was how we handled COVID-19 vaccines during the pandemic, becoming the main vaccines producer and exporter globally. But even in the field of semiconductors, where we produce only 10% of our needs in Europe, we can succeed in reversing the trend. For example, ASML, which is the main supplier of equipment for semiconductor factories, is a Dutch company.

Strategic autonomy is not a question of isolating ourselves and trying to produce everything in Europe, but of giving ourselves the means to discuss from a position of strength with our foreign partners.

It is not a question of isolating ourselves and trying to produce everything in Europe, but of being less naïve and giving ourselves the means to discuss from a position of strength with our foreign partners. Anne Marie Engtoft, Ambassador of the Danish government for technology, and Tyson Barker, from the German Deutsche Gesellschaft für Auswärtige Politik, discussed these issues with Thierry Breton.

In the next session, we discussed the pressing challenges on energy and climate with Cristina Narbona, first Vice President of the Spanish Senate and Cristina Lobillo, Director for Energy Policy at the European Commission. We have to deal with the immediate crises of exceedingly high price for gas and electricity and prepare ourselves to get through the winter, as Russia is clearly using its energy exports as a weapon. However, at the same time, we must also address the climate emergency, which this summer led to intense heatwaves and drought. Both crises point to the cost we pay now for having delayed the energy transition. So we need to step on the accelerator, making best use of the EU policy framework and its financial tools including Next Generation EU.

We talked about the range of measures needed on diversification, renewables, savings and efficiency, as set out in the RePower EU plan. We also looked at the longer-term aspects, including how we can forge forward-looking partnerships with other countries for instance on clean hydrogen. As EU, we have to avoid that choices made to address the short-term lock us into new longer-term dependencies, including when it comes to critical materials that we need to power the green transition.

Sovereignty means the capacity to act freely. Transferring powers to the Union enhances the sovereignty of Europeans because in many areas, it is only together that we can increase this power to act.

In the final session, Giorgio Anselmi, from the European Federalist Movement, and Guy Verhofstadt, Member of the European Parliament and Co-chairman of the Conference on the Future of Europe, discussed the future of the Union in the context of the war against Ukraine. Both underlined that the EU is again at a turning point. We have made progresses in many areas during the last decades but we are still too fragile, divided and naïve. Our structures are too complex and our decision processes are too lengthy. Guy Verhofstadt underlined the European Union is clearly not fit for the 21st century in its current state. Our high level of dependence in the High tech sector as well as our difficulty to defend our values and interests in a new “age of empires” show in particular the urgent need of a new quantum leap in our internal organisation.  For my part, I stressed in conclusion that sovereignty means the capacity to act freely. Transferring powers to the Union enhances the sovereignty of Europeans because in many areas, it is only together that we can increase this power to act.

A lot of “food for thought”

In short, this seminar brought a lot of “food for thought” for me, on the eve of our informal rentrée Council of Foreign and Defence ministers. I hope, that it will be also the case for the readers of this blog: Europe can only really become a major geopolitical player, if its citizens take ownership of these global – admittedly complex - issues.