HR/VP Blog – Last week, the European Council opened what should be a new chapter in EU-Turkey relations. EU leaders are ready to engage on important avenues of cooperation including the modernisation of the Customs Union, the relaunching of high-level dialogues and people-to-people contacts, plus strengthened cooperation on migration management. 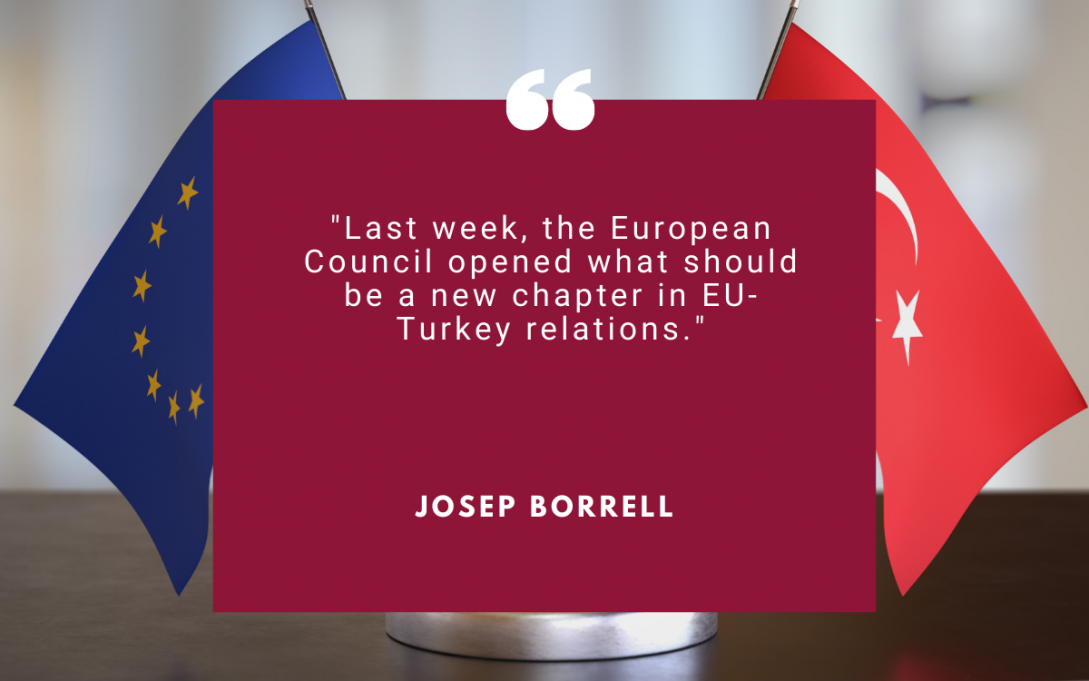 This comes after a very complicated year, when our relations reached a low point, with unprecedented levels of tension. Nevertheless, towards the end of 2020, Turkey’s authorities started communicating their interest in re-engaging with the EU. Negative rhetoric was substantially toned down and actions contrary to interests of EU member states in the Eastern Mediterranean were halted.

"The EU has a strategic interest in the development of a cooperative and mutually beneficial relationship with Turkey."

The situation remains fragile, but the EU welcomes these forthcoming developments and gestures on the part of Turkey and has responded by extending its hand. Indeed, the EU has a strategic interest in the development of a cooperative and mutually beneficial relationship with Turkey. And this is equally true for Turkey. The EU is by far Turkey’s number one import and export partner, as well as source of investment. Looking at the latest pre-pandemic figures, we see €69.8 billion of Turkey’s exports directed towards the EU, and €58.5 billion of its foreign direct investment (FDI) coming from the EU. More than 5.5 million Turkish citizens are living in EU member states, and according to Eurobarometer 61% of Turkish citizens look at the EU as an actor that counts in the world. And with its security and defence anchored within NATO, it seems difficult to believe that Turkey could realistically envisage better options than pursuing a European path.

"The EU is by far Turkey’s number one import and export partner, as well as source of investment."

It would of course be naive to consider that problems are over. The report on EU-Turkey relations that I have presented jointly with the European Commission to the European Council has a double-track approach and identifies four main elements of tension in the relationship: maritime disputes in the Eastern Mediterranean; the Cyprus settlement question; divergent objectives in regional conflicts, notably in Libya and Syria; and the deterioration of democratic standards in Turkey.

On the regional aspects, we have substantial work ahead, in particular on Syria (on which we are currently co-chairing with the United Nations the fifth Brussels Conference on “Supporting the future of Syria and the region”) and on Libya, where more recently convergences of interests are slowly starting to appear. More generally, the entire neighbourhood has suffered dramatically from turmoil and a new brand of terrorism has appeared.

"Dialogue and action on democratic standards will always be an integral part of the EU-Turkey relationship."

Democratic standards remain a key element, not just for the EU, but also for the people in Turkey. The targeting of political parties and free media and other recent decisions run counter to the respect of democracy and fundamental rights (see two recent statements in this regard here and here). Dialogue and action on such issues will always be an integral part of the EU-Turkey relationship.

The report on the state of play of EU-Turkey political, economic and trade relations explains the impact tensions have had on our bilateral relations, virtually freezing the main instruments and processes for cooperation. Last week’s Statement of the members of the European Council rightfully refer to these various elements, acknowledging their significance in ensuring that a path of cooperation and dialogue can succeed.

The task ahead is far from easy. EU leaders have stressed the need for a phased and proportionate, but also reversible approach. Courage and determination, but also flexibility and understanding, are necessary to redress our relationship in a sustainable manner. Some of the pending issues have been entangled in decade-long disagreements and conflicts. However, one key difference distinguishes today’s efforts in finding solutions from those of the past: there is a heightened consciousness of how old disputes deeply affect security interests of the European Union. They can no longer be considered just bilateral matters between Turkey and some member states.

"The old disputes deeply affect security interests of the European Union and can no longer be considered just bilateral matters between Turkey and some member states."

Turkey is an important regional power and its historical destiny could well be to join the rest of Europe in the unique peace project that we are building under the banner of the European Union. At a moment when strategic polarisation seems to be resurfacing around the world, the strengthening of a European democratic pillar that includes Turkey could be a key balancing element. This is not a given, but the European Council has offered a possible bridge.

We now have to build this bridge and I believe we can do this. With political clear choices and commitment from all sides. On our side, the EU is ready to invest the required efforts. If Turkey is equally willing to do so, and underlines its more positive rhetoric with respective actions, we can continue to move from de-escalation to building a mutually beneficial agenda.