The rentrée of 2020: decision time for EU foreign policy

Foreign policy never stops. But the summer of 2020 has been exceptionally busy, with a seemingly never-ending series of crises: in Lebanon, Belarus, Mali and the Eastern Mediterranean. At the informal Gymnich meeting in Berlin (27-28 August) we must forge a common way forward. It is both urgent and feasible to strengthen Europe’s international clout. 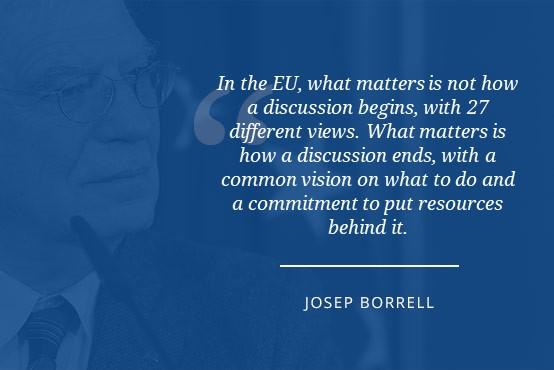 One of the summer’s big events was the devastating explosion in Lebanon on 4 August. The images were near apocalyptic. The explosion left at least 220 dead, with thousands injured and homeless, and €15 billion in damages. It sent shockwaves not only through the harbour of Beirut but also the political system of the country. It exposed deep flaws in its governance in terms of ‘state capture’ with elites responsible for corruption and mismanagement. These flaws were already known beforehand - and COVID-19 had already added to the urgency to enact reforms.

Now this urgency can no longer be denied. As EU we demonstrated our solidarity with the Lebanese people in their hour of maximum need. That was the message of Presidents Macron and Michel when they visited. We will continue to support Lebanon, with humanitarian supplies in the short term but also with macro-financial assistance, in cooperation with the IMF. But all this will require deep reforms in how the country is run politically: we need a new political settlement, to be agreed of course by the Lebanese people.

Then on 9 August we had the Presidential elections in Belarus. We always knew that the Lukashenko regime would not allow fully free and fair elections. But his announced re-election with 80% of the vote, despite many indications to the contrary, was a blatant rejection of the desire of the Belarusians for change. What’s worse is that the regime has chosen to respond to the mass demonstrations with the full panoply of repression: police violence and mass arrests. Impressively, people in Belarus have come out again and again in large numbers, demanding respect for their democratic rights.

As EU we have made it clear that we do not recognise the result of this election and fully support these democratic aspirations; that we will sanction those responsible for electoral fraud and the subsequent violence; and that a national political dialogue is urgently needed. We cannot stay silent when fellow Europeans insist on their democratic rights and wish to shape their own future – they need our support and the space to do so by themselves. This was also my clear message to Russian Foreign Minister Lavrov when I spoke to him.

We cannot stay silent when in Belarus fellow Europeans insist on their democratic rights and wish to shape their own future – they need our support and the space to do so by themselves.

Another major shock came on 18 August when a military coup took place in Mali, deposing the President and Prime Minister. I immediately condemned this coup as unconstitutional, and the African Union and ECOWAS did the same. It was yet another reminder of the deep- rooted crises facing the country and the Sahel region (of governance, security, development). A coup is never the right answer but we do need to think hard about how to change the way we as EU support the local population, which craves sustainable security and inclusive economic development.

All throughout the summer the situation in the Eastern Mediterranean has grown more tense, with Turkish ships conducting seismic work in European waters. In July, I had visited our Member States Greece and Cyprus a well as Turkey, and I have remained in constant contact throughout the summer, including meeting the Turkish Foreign Minister on 6 August.

Our core aim is and remains to show strong solidarity with EU Member States under threat, while working to de-escalate the tensions and allow dialogue and negotiations to address the underlying issues, which are highly complex and integrated. In August, developments were taking a worrying turn, carrying the risk of triggering open conflict. We discussed this at a special Foreign Affairs Council on 14 August, followed by an emergency European Council on 19 August. We agreed to send a clear signal of Turkey needing to halt its illegal drilling activities and work to de-escalate the situation and that all options are on the table.

On Turkey, we need to show strong solidarity with EU Member States under threat, while working to de-escalate the tensions and allow dialogue and negotiations to address the underlying issues.

EU-Turkey relations are complex and multifaceted: Turkey is an important neighbour and partner for Europe in many fields; a crucial ally in NATO; and both sides want to keep a cooperative framework on migration in place. But Turkish domestic dynamics and its regional role are increasingly problematic with assertions of Turkish power, also in Syria, Libya and elsewhere.

We need to define a firm and balanced long-term strategy for EU-Turkey relations, based in the first place on solidarity with the most concerned Members States but also knowing that diplomacy can only work if all sides invest in building trust.

The Gymnich meeting and how to enhance the EU’s clout

How we position ourselves on these important issues and geo-political crises will be discussed with EU Foreign Ministers at the upcoming ‘Gymnich’ meeting, at the end of this week in Berlin. This is an informal meeting, held twice a year, where we discuss things without neckties and without the pressure of having to take formal decisions. We should take a step back and reflect more deeply on how to approach our overall relations with Turkey, with Russia, our engagement in the Sahel and how we can strengthen the EU’s strategic autonomy in the post-pandemic world. I have previously set out my belief that Europe should position itself as a ‘partner of choice’ to others. Principled, but not dogmatic. Open, but not weak. Progressive but not naïve. Ready to act multilaterally whenever we can and autonomously if we must.

Nine months into the mandate, I feel there is a shared awareness of just how serious the challenges are that Europe is facing, in our neighbourhood but also when it comes to the wider trends around us. It is clear we face more assertive players, some with an imperial mind-set: a determination to deploy all forms of power at a global scale. However, if truth be told, our European responses are not always keeping pace. We are not always clear enough, or fast enough, or acting with enough impact and consistency.

Intellectually, people tend to agree with this diagnosis. But when it comes to changing things, well, then politics often gets in the way. It is the familiar problem of 27 points of view and the need for unanimity. This produces an EU foreign and security policy of ‘strong nouns and rather weak verbs’, as the former Commissioner for External Relations Chris Patten used to say. A policy that is high on rhetoric but when it comes to corresponding financial resources, we don’t always put our money where our mouth is.

We cannot change big global trends, but we can change how we respond to them.

The positive point here is that these constraints are self-imposed. We cannot change big global trends, but we can change how we respond to them. In our decision-making, each country can ultimately block any EU position or action. That’s negative power. If everyone sits on their position and expects the rest of the group to converge on their viewpoints, that’s not the way that helps us shape the world or set the agenda. For that, you need positive power. By investing more in unity, all Member States would gain in influence, because by slowing things down or weakening our capacity to act, they also harm themselves.

If we are able to combine the unity of the Council with the capacities of the Commission and the EEAS, the EU can have a real impact, acting as a real power. I will do all I can at the Gymnich meeting and beyond to build the necessary unity among Member States to do just that.