Rentrée 2021: Afghanistan and beyond

HR/VP Blog – At the end of last week, we had two informal meetings in Slovenia, one with EU Defence Ministers and another with Foreign Ministers. Naturally, Afghanistan was at the top of our agenda, but we also discussed EU relations with China and the Indo-Pacific. 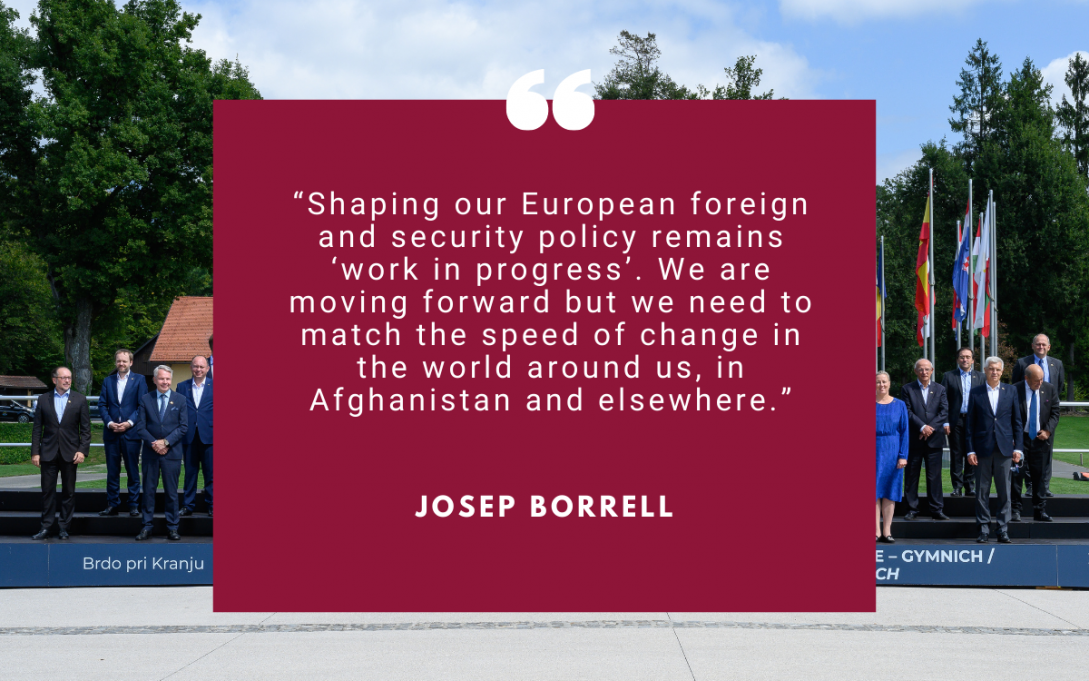 The Afghan crisis isn’t over. We must determine how to deal with the Taliban and draw the consequences of this crisis for our action in the rest of the world and for our defence policy.

During our meeting with foreign affairs ministers, the Head of the United Nations Agency for Refugees in Afghanistan, explained the dire humanitarian situation in the country. To face this dramatic ongoing humanitarian crisis and help people who still want to leave the country, we have to engage with the Taliban. However, engagement does not mean recognition.

The level and nature of this engagement will depend on the actions of the new government. With EU Foreign Ministers, we agreed on the following five benchmarks:

1.   The commitment that Afghanistan will not serve as a base for the export of terrorism to other countries.

2.   Respect for human rights, in particular women's rights, the rule of law and freedom of the media.

3.   The establishment of an inclusive and representative transitional government through negotiations.

4.   Free access for humanitarian aid, respecting our procedures and conditions for its delivery.

5.   Allowing the departure of foreign nationals and Afghans at-risk who wish to leave the country in line with what was already decided by United Nations Security Resolution 2593.

In order to assess the implementation of the above benchmarks and to be able to have an efficient operational engagement on the ground, we have decided to coordinate our contacts with the Taliban, including through a joint EU’s presence in Kabul, coordinated by the European External Action Service - if the security conditions are met. From there, we could support the departure of European nationals that are still in Afghanistan and Afghans at risk that could be received in European Union member states as decided by any of them. Many EU member states nationals are still in Afghanistan as well as Afghans that have been cooperating with them or that have been identified as people at risk.

The need to engage more with Afghan’s neighbours

We also need to engage more with Afghanistan’s neighbours, and regional actors. We decided that, under the auspices of the European External Action Service, the EU will initiate a regional political platform of cooperation with Afghanistan’s neighbours. This political platform will consider the management of population flows from Afghanistan; the prevention of the spread of terrorism; the fight against organised crime, including drug trafficking and human being smuggling. A much needed move to stabilise the whole region. We will of course coordinate strongly with the United States, the United Nations as well as with other partners and regional organisations in the framework of the G7 and the G20.

Beyond that, we have more long-term lessons to learn from this situation. I listed some of them in an OpEd published last Wednesday in the New York Times. And we have begun to discuss them during both meetings, also with the Deputy Secretary Generals of NATO, Mircea Geona, and the Under Secretary General of the United Nations, Jean Pierre Lacroix.

“Afghanistan has shown in a striking way that deficiencies in EU capacity to act autonomously comes with a price.”

Afghanistan has shown in a striking way that deficiencies in EU capacity to act autonomously comes with a price. The only way forward is to combine our forces and strengthen not only our capabilities, but also our will to act. This means enhancing our capacity to respond to hybrid challenges, covering key capability gaps, including logistic transport, raising the level of readiness through joint military training and developing new tools like the 5000 people Initial Entry Force that we are discussing actually. Such an Entry Force would have helped us to provide a security perimeter for the evacuation of European Union citizens in Kabul.

We have discussed these kinds of proposals for many years and, so far, divisions among member states have led to insufficient implementation and action. I have the hope – I do not have assurances yet- that the discussions that we have been having during the last couple of years on the Strategic Compass, will have created enough common understanding of the challenges and threats that we are facing, to mobilise the common will of the member states.

“Regarding European defence, I have the hope that the discussions that we have had during the last couple of years have created enough common understanding of the threats that we are facing, to mobilise the common will of the member states.”

What has happened in Afghanistan will for sure be exploited elsewhere by anti-Western actors. However, it is up to us to learn the right lessons: We need to be aware of the pitfalls of carrying out state-building efforts in war-torn societies, which are not structured along the lines of a modern state. No amount of external support can be a substitute for a viable local political settlement, what we often call ‘local ownership’. We have to step-up our integrated approach, combining military, civilian, development and diplomatic efforts. This is particularly relevant for the efforts that we are deploying in other parts of the world, like in the Sahel.

Beyond Afghanistan, our FAC also discussed EU relations with China. They are becoming increasingly challenging in the last months, driven by ever-growing Chinese assertiveness, including on occasions the negative targeting of some member states. We need to show solidarity, unity and coordination to meaningfully engage with China.

“To meaningfully engage with China, we need to show solidarity, unity and coordination.”

Looking ahead, the EU will work with China on Afghanistan, Myanmar or climate change in the run-up to the COP-26. At the same time, competition in trade and economic matters will continue to drive EU-China relations in the coming year. We remain also concerned regarding the situation in Hong Kong, in Xinjiang, in Tibet and the South China Sea, among other. This calls for a balanced and calibrated strategy and a shared sense of responsibility and unity. To engage China from a position of strength, we all - EU institutions and member states - need to apply the EU’s multifaceted approach treating China as a partner, competitor, and systemic rival.

India, a central player in the Indo-Pacific region

We also met with the Foreign Minister of India Subrahmanyam Jaishankar. India is a central player in the Indo-Pacific region, where the world’s centre of gravity is shifting. Later in September, we will release a Joint Communication on our Strategy for this region. The last EU-India Leaders’ Meeting in May showed how much our relations have expanded in the past years. Besides the breakthroughs on trade, we also underlined the foreign and security agenda. For example, a complex joint naval exercise was held in the Gulf of Aden in mid-June. Together with India, we can do a lot to ensure that the international law, including the UN Convention on the Law of the Sea (UNCLOS), are upheld in the region.

Connectivity is another natural candidate for increased cooperation. Last May, we have entered into a Connectivity Partnership, we need now to implement it through concrete projects. Other pressing priorities include the fight against climate change where we count on India to play its full part. Our discussion demonstrated the resolve of EU Foreign Ministers to strengthen our approach to the Indo-Pacific.

“During this summer, Lukashenko’s regime, cynically, has been using, migrants and refugees to artificially create pressure on our Eastern borders. We are ready to take all measures needed to support Lithuania, Latvia and Poland.”

Finally we discussed also the deterioration of the situation in Belarus. Lukashenko’s regime, cynically, has been using during this summer, migrants and refugees to artificially create pressure on our Eastern borders. The Ministers stand in solidarity with Lithuania, Latvia and Poland and we are ready to take all measures needed to support them.

The informal meetings of Defence and Foreign Ministers in Slovenia showed that shaping our European foreign and security policy remains ‘work in progress’. We are going forward but we need to match the speed of change in the world around us. When it comes to our response to the Afghanistan crisis, but also on the other big geopolitical challenges we face.