HR/VP Blog – Last weekend I attended in Germany the G7 meeting of ministers of foreign affairs. One of our main topics was the massive negative impact on the world economy of the war on Ukraine with significant risks of destabilization in many regions and countries. It could also weaken international support to condemn Russian aggression as our video conference with the Indonesian foreign affairs minister confirmed. Europeans need to be fully aware of those risks and act to limit them globally. 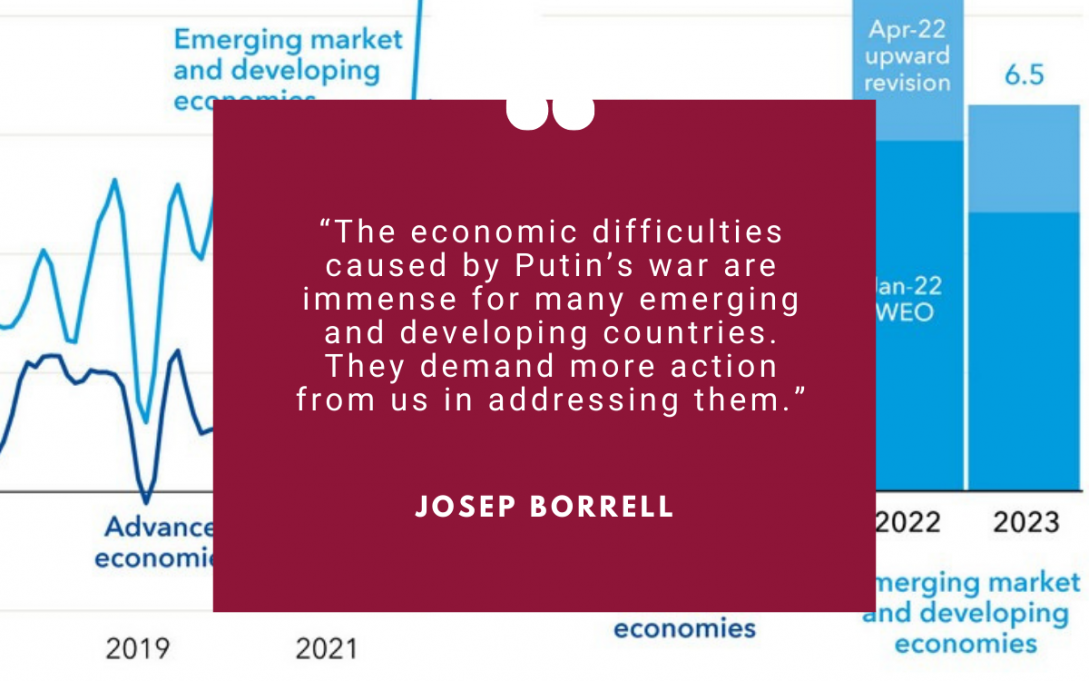 Many voices are warning of the recession that the war against Ukraine could cause. “War sets back economic recovery” the International Monetary Fund (IMF) stated recently. "Is the global economy flying into a perfect storm, with Europe, China, and the United States all entering downturns at the same time later this year? ", the American economist Kenneth Rogoff asked. Such a negative dynamic could trigger a new global financial crisis.

War on Ukraine has major consequences in the EU itself

The negative consequences of the war are obviously major within the EU itself, since we are neighbouring the theatre of operations and had close economic ties with both Ukraine and Russia. It also brings with it in the EU a flow of refugees that is unprecedented since the Second World War. The European Commission has already dealt with these issues and will continue to do so, notably on the energy front with the REPowerEU plan, which will be specified this week. But our own difficulties must not make us forget those faced by many emerging and developing countries. I have already addressed the crucial subject of food insecurity in this blog recently. The shock waves are reaching more and more countries and sectors. Let’s summarise the risks that the global economy is facing.

“The rise in inflation has been more pronounced in emerging and developing countries. Inflation affects the poorest and weakest most and contributes to increasing inequalities worldwide.”

The war against Ukraine has been accompanied by a sharp rise in inflation under the pressure of food, energy and major commodity prices. Inflation had already been rising throughout 2021 as a result of increased demand caused by the economic recovery and the continued disruption of many value chains, but the war has accelerated it. And this movement has been more pronounced in emerging and developing countries. Inflation affects most the poorest and weakest and contributes to increasing inequalities worldwide. This rise in inflation is leading to significant increases in interest rates by central banks and a tightening of monetary conditions. And here again, this movement is even more marked in emerging and developing countries. This in a context where the external debt of these countries had again increased in recent years because of the pandemic. Emerging and developing countries have less fiscal room to combat crises and cushion the impact on their citizens than developed ones. This was already the case before, but it is even more the case today.

“Emerging and developing countries have less fiscal room to combat crises and cushion the impact on their citizens than developed ones. This was already the case before, but it is even more the case today.”

In this worrying context, we have also observed in recent weeks a rapid fall in share prices on financial markets and a spectacular loss of value on cryptocurrencies. This could trigger a new financial crisis, accompanied by a "flight to quality" of international capital to the United States. This risk is already beginning to materialize with a sharp rise of the exchange rate of U.S. currency; a movement that feeds inflation in countries whose currency is depreciating. This context has led the IMF to significantly lower its economic forecasts compared to last January, particularly for emerging countries, aggravating the loss of growth suffered by these countries due to the pandemic. If we look more specifically at the different regions of the world, in the Middle East, non-energy producing and food importing countries such as Egypt are weakened. The IMF anticipates also a sharp slowdown in North Africa and in countries that were already experiencing major crises such as Lebanon and even more so in Yemen, Syria and Afghanistan. In Turkey, which was already going through a difficult economic period, inflation has soared above 60% while the Western Balkans economies are expected to lose significantly steam due to the war.

The Caucasus and Central Asia will be the hardest hit regions because of their close ties with Russia and Ukraine, with the non-energy producing countries, particularly Armenia and Georgia, most at risk. In Latin America, the COVID-19 pandemic had wreaked havoc in many countries and led to a sharp rise in poverty and inequality. The continent should experience in addition a severe economic slowdown this year, particularly in Brazil and Chile.

In Asia, the direct effects of the war are expected to be more limited particularly because the price of rice remain stable, but the COVID-19 pandemic had greatly weakened the region's economy and the economic slowdown in Europe and the United States will continue to affect it. While China should experience a major economic slowdown, due to the resurgence of the pandemic and the strict zero COVID policy. Some countries, such as Sri Lanka and Pakistan, are nonetheless already destabilised, while in Indonesia, the rise in palm oil prices as a result of the global shortage of vegetable oil caused by the war (Ukraine exports half of the world's sunflower oil) has led the country to block its exports. Looking ahead, the exceptional heat waves experienced this spring in the Indian subcontinent, combined with the droughts in Europe and the United States, could have a very negative effect on global food security in coming months. India, the third wheat producer in the world, has already decided to ban wheat exports…

It is in sub-Saharan Africa that the risks are the greatest. This continent, which is experiencing strong demographic growth, is already the most affected by climate change, with prolonged droughts in East Africa. It is also increasingly destabilized, particularly in the Sahel and the Horn of Africa. Nigeria and South Africa are going through major social crises. The external debt of many African countries has increased significantly in recent years, particularly with China, and spreads have widened considerably since the outbreak of the war in Ukraine. Several sub-Saharan African countries are heavily importing energy and food products, particularly wheat from Russia and Ukraine.

“Most EU partners do not question our position on the war, but demand more action from us in addressing its consequences.”

In short, this bleak economic outlook in many emerging and developing countries will have negative social and political consequences and affect the perception of the war on Ukraine. Most partners do not question our position on the war, but demand more action from us in addressing these consequences. As the crisis advances, the risk is clear: encouraged by the Russian propaganda apparatus, many could be tempted to blame Europeans and the West for these problems rather than the war of aggression led by Vladimir Putin. This is wrong on the facts but if people define a situation as real, it is real in its consequences.

During the G7 ministers meeting we had a video conference with Retno Marsudi, our colleague from Indonesia, ahead of the G20 meeting planned in November in Bali. She warned us about this trend and so did Argentinian President Alberto Fernandez when meeting the Spanish Government in Madrid last week. That is why we must counter everywhere the Russian narrative and explain the reality of the facts and responsibilities, not only with political leaders but also directly to the public opinion.

We need to do more

But we need also to do more. First, by increasing the pressure to bring Vladimir Putin to stop this war and withdraw Russian troops from Ukrainian territory and by enabling Ukraine to keep producing and exporting agricultural products. Second, we must lead with ambition within the international institutions, the United Nations, the World Bank, the International Monetary Fund, the Food and Agriculture Organisation and the World Food Program, the G7 and G20. It will be necessary to expand the efforts already undertaken for debt relief of over-indebted poor countries, in particular by getting China to assume all its responsibilities in this area. And, once again, we need a closely coordinated macroeconomic policy response from the world's largest economies to limit the risks of recession and global financial crisis.

We should also avoid false solutions, keeping trade open, as trade barriers would only worsen affordability and have an asymmetrical impact on the poor. We should help stimulate local production in emerging and developing countries rather than dumping in-kind donations of food with adverse developmental effects. During the G7 Foreign Ministers meeting, we discussed extensively the issue and welcomed the UN Secretary General’s initiative to convene a “Global Crisis Response Group on Food, Energy and Finance” (GCRG). The global response is disjointed so far and the challenge is not just to do more, but also to better coordinate efforts.

The EU and its member states are already the largest contributors of development aid in the world. However, we must recognise that we face strong constraints. Due to its limited amount and multi-year nature, the EU budget does not give us a large room for manoeuvre to deal with exceptional situations such as the one we are currently facing globally. This is one of the subjects on which the work undertaken on the future of Europe should allow to make progress.

We must at least ensure that our internal difficulties and our support to Ukraine do not weigh on the aid we are providing to other regions of the world. There are growing fears that this could happen. We must also coordinate more closely the actions of European institutions, including the financial ones, and member states in the various countries and regions of the world.

The war on Ukraine has pushed us to speak the "language of power", giving active support to Ukraine, being determined on sanctions and improving our common defence capacities. However, to compel Vladimir Putin to back down, we have also to convince the world that the economic problems we are facing are the result of Putin’s war of choice and take resolute action to address the wider impacts that this brutal war is having on our partners worldwide.