HR/VP Blog - Last week I attended the annual high-level week of the UN General Assembly and participated in an important meeting of the UN Security Council on Ukraine. This year’s opening of the UN General Assembly demonstrated how isolated Russia has become. Now, the international community must force Russia to stop this war, avoid the use of weapons of mass destruction under any circumstances and ensure that Russia is held accountable for its actions./p> 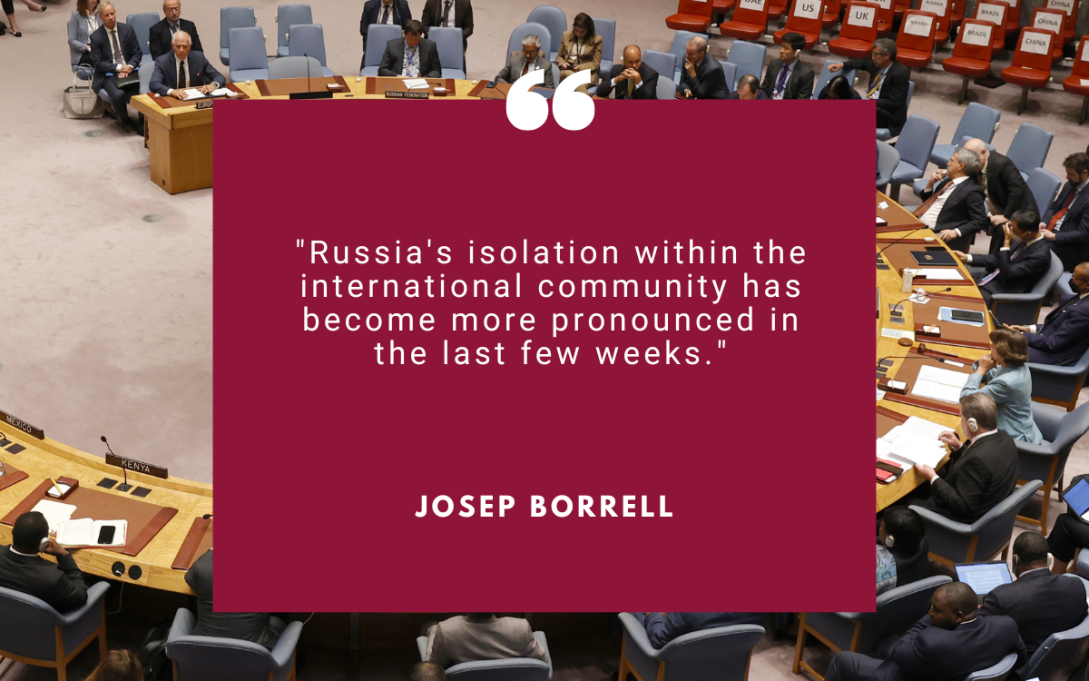 The United Nations is the temple of multilateralism and the Security Council is its inner sanctum. Last week, with France acting as Chair, Foreign Ministers from the members of the Security Council and invited countries, plus the UN Secretary General and the Prosecutor of the International Criminal Court (ICC) had the rare opportunity to debate in person the war against Ukraine and, in particular, accountability for the crimes committed there. My intervention before this Council was the most important moment of my week in New York.

The illegal nature of the Russian aggression

I presented the EU’s point of view on the illegal nature of the Russian aggression, the moral and political defeat that Russia has already suffered, our refusal to recognise the sham referenda organised by the Russian occupation authorities in Ukraine with a strong warning against the potential use of weapons of mass destruction by Russia.

I appealed to all global leaders to send a clear and united signal to Russia that the use of weapons of mass destruction is unacceptable in any circumstances.

This last issue is essential. I appealed to all global leaders to send a clear and united signal to Russia that the use of weapons of mass destruction is unacceptable in any circumstances, and I was pleased that the Chinese Foreign Minister, among others, joined our position during our bilateral meeting. Based on what I heard in the UNSC and during my various bilateral meetings, there seems to be a global consensus on which we must build.

Morally and politically, Russia has indeed already lost the war and is increasingly losing it on the battlefield as well. However, regrettably, President Putin is continuing on his dangerous path of escalation. He is trying to intimidate Ukraine and all countries that support Ukraine. This will fail again, as it has already failed in recent months and as all wars of invasion eventually do. But how many more men, women and children will need to die before the Russian President decides to silence his guns?

This war is much more than a war in Europe. At stake is the protection of weaker states from the more powerful ones.

This war is much more than a war in Europe. At stake is the protection of weaker states from the more powerful ones. Do we want the global rule of law, or do we want the law of the jungle? Do we believe in spheres of influence or in the free choice of sovereign states?

A tragedy in so many ways

This war is a tragedy in so many ways. In addition to the terrible casualties and destruction caused in Ukraine, Russia is dragging the world into an economic recession and a global food crisis. It is not only Ukraine and the Ukrainian people, who are victims of this senseless war, many others around the globe are also strongly affected by hunger, instability and inflation caused by this war.

We support the Black Sea Grain Initiative facilitated by the UN Secretary-General and Turkey. Together with our European Union Solidarity Lanes, this has helped to lower global food prices – but so far it did not solve this global challenge. It is important to highlight that two-thirds of the Ukraine grain exported this way goes to those countries that need it most and not to Europeans, as Putin is falsely arguing.

Accountability was the core issue of this Security Council meeting. Russian armed forces have been terrorising civilian populations and are committing countless crimes: mass murder, destruction, rape and forced migration. All victims of Russia’s aggression deserve justice and reparation.

As President Zelenskyy said in the General Assembly: where there have been crimes, there must be justice. Otherwise, peace will not be possible. During our meeting, Karim Khan, the Prosecutor of the International Criminal Court reported on the worrying findings of the ICC in Ukraine during the past months. We rely on the ICC and on the Ukrainian authorities on this issue. However, ensuring accountability is the responsibility of the whole international community. We owe this not only to the victims, but also to the next generation, to the future of Ukraine.

During this meeting, the person that should have been listening most to the other Foreign ministers - Sergei Lavrov, the Russian Minister - only entered the room to deliver his own surreal and outrageous speech and then immediately walked out, as he has also done at the recent G20 Foreign Minister’s meeting and at the ASEAN Regional Forum. During his address to the Council, Lavrov spouted well-known Russian propaganda, trying to justify the unjustifiable with absurd accusations regarding the so-called "Nazi" regime in Ukraine. He seemed impervious to reality and living in a parallel universe.

The attitude of the Russian Foreign Minister in New York confirmed his country's profound disrespect for the multilateral institutions and the international rules-based order.

Despite being a permanent member of the UN Security Council, the attitude of the Russian Foreign Minister in New York confirms his country's profound disrespect for the international community, the multilateral institutions and the international rules-based order. This contempt was already clearly expressed by Vladimir Putin's decision to escalate the conflict in the middle of the United Nations High Level Week, with sham referenda to annex part of Ukraine, the mobilisation of at least 300.000 men, to strengthen its aggression against this country and threats to use weapons of mass destruction. In stark contrast, Dmytro Kuleba, Foreign Minister of Ukraine, recalled with dignity the suffering of the Ukranian people caused by Russian aggression.

None of other countries supported Russia’s point of view

It was striking that besides Belarus, none of the other countries expressed support of Russia's point of view. Chinese FM Wang Yi, recalled that "the sovereignty and territorial integrity of all countries should be safeguarded, the purposes and principles of the UN Charter upheld". He also asked that "international humanitarian law should be observed to minimise civilian casualties" contrary to what Russia is doing on the ground. Indian Foreign Minister Jaishankar stressed that "this cannot be an era of war” and recalled that "the global order that we all subscribe to, is based on international law, the UN Charter and respect for the territorial integrity and sovereignty of all States”. Also, Shirley Ayorkor Botchwey, Ghana’s Foreign Minister stressed that Ukraine “has every right and indeed a responsibility to defend its territorial integrity and political independence,” and concluded that “Ghana does not, and will not, recognise any territory that is unilaterally and forcefully acquired as dismembered from a sovereign entity”.

Many other countries, from all continents spoke during this meeting, including US Secretary of State Anthony Blinken and my colleagues from the EU and wider European family. They all underlined our united and undivided support for Ukraine to regain its full sovereignty over its entire territory, our condemnation of threats to use weapons of mass destruction and of the multiple abuses committed by Russia in Ukraine, which must be brought to justice.

Peace in Ukraine still seems a long way off. However, I have returned from New York both worried and confident. Worried because I am fully aware of the seriousness of the international situation caused in particular by the food and energy crises and the dangers that Russia poses to world peace. But also confident because between the last G20 Foreign Ministers meeting in Bali in July and the UNGA week in New York, I have noted a real shift in the positioning of many countries, including several important ones. The Russia’s political and military radicalization has begun to worry many of them.

I came back to Brussels reassured on one crucial issue: Russia's isolation within the international community has become much more pronounced in the last few weeks.

Therefore, I have come to Brussels reassured on one crucial issue: Russia's isolation within the international community has become more pronounced in the last few weeks. Despite a massive and cynical use of disinformation and blatant lies, Russia is losing ground in the ongoing battle of narratives. More and more countries understand now that Putin is taking the world into a very dangerous direction and must be stopped.

At the same time, I understood that it is necessary for the EU to engage with the rest of the world. We need to help the most vulnerable countries of the Global South to face the food and energy crises caused by the war.