Standing with Ukraine on its Independence Day – and every day thereafter

HR/VP Blog - On Ukrainian Independence Day and six months since the Russian aggression started, the best message that the EU can send is that we will continue to stand with Ukraine. We must be prepared to pay the price of defending our common freedom and security. 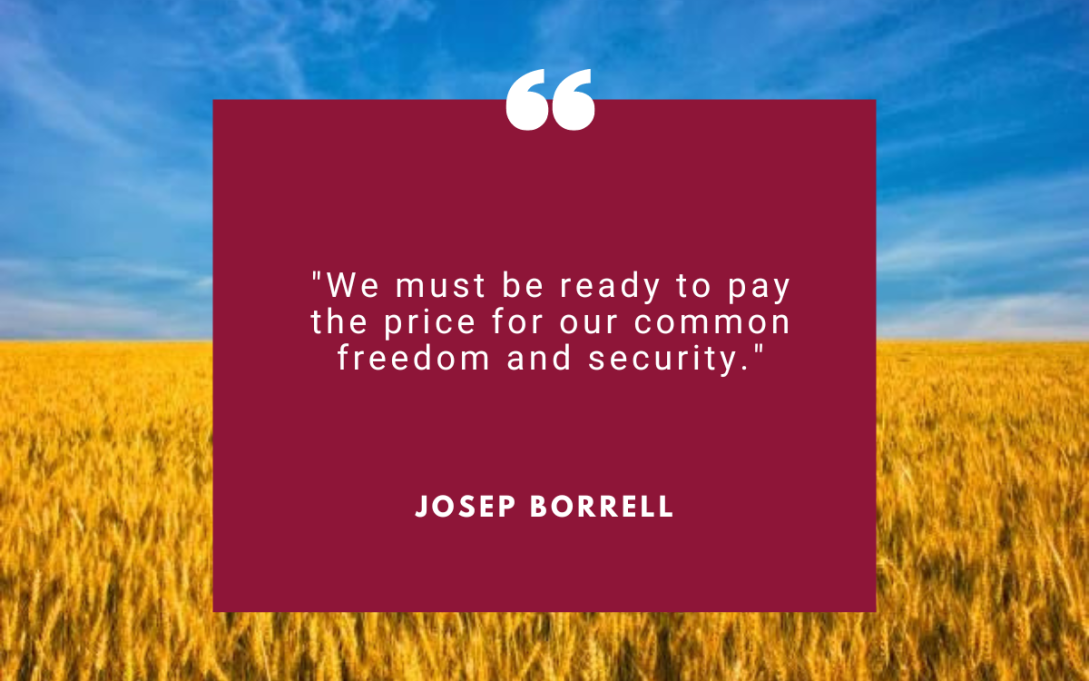 Six months ago, Russia launched a brutal, unprovoked and unjustified invasion of Ukraine: an attack that was both a crime and a major miscalculation. President Putin thought that Ukraine’s government would quickly collapse and its President would flee. The Russian regime also assumed that the EU would be divided and unable to muster a forceful response. But Ukrainians rallied to defend their country and their sovereignty, displaying impressive bravery against the aggressor. And the EU with its partners has shown unprecedented unity and determination to support Ukraine in all domains, upholding international legality and the UN Charter.

Today is Ukrainian Independence Day: in fact, it is the 31st time that the country celebrates its independence since 1991. Normally this should be a time of joy and celebration, as it is for countries around the world on their national days. But for Ukrainians this year it is marked by fears of further attacks and tragedy. For Russia’s invasion has already caused six months of death and destruction. We have seen war crimes, massacres and indiscriminate attacks on schools and hospitals; around 10 million people forced to leave their home; and cynical attacks on fields of wheat and the weaponisation of grain exports. Today, in spite of the recent agreement brokered by the UN and Turkey, Ukraine’s grain exports are still far less than what they were last year.

This is not ‘just’ a European war, neither in terms of the principles involved nor its concrete effects. In a world where a bigger country can just invade its neighbour and violate the principle of the non-use of force in such a blatant manner, everyone would be less safe. This war is sending massive ripple effects around the world. Most strikingly, it has sent prices for energy and food through the roof. And as usual, those least able to cope are the ones suffering the greatest burden.

The EU has been on the side of the Ukrainians, right from the start of the war, aware that our shared security is at stake. We have adopted six packages of ever more significant sanctions. We have, for the first time ever, financed the delivery of military support to a country under attack, to enable Ukraine to fight back. We are providing humanitarian support and macro-financial assistance, to keep the Ukrainian state afloat. In total, € 9.5 billion have been mobilised by Team Europe so far, with up to €8 billion in additional macro-financial assistance in the pipeline.

And we have formally decided that we want Ukraine to become a future member of the EU, as part of our family. The EU and Europe are changing in profound ways because of this war.

Six months into the war, Russia has occupied twenty percent of Ukrainian territory and a good part of its Black Sea coastline. However, the war has now clearly entered a new phase. Also thanks to Western military support, Ukraine has managed to halt the Russian offensive and, more recently, liberated some areas, especially in the South of the country near Kherson. There have been a number of effective attacks on munition dumps and military bases deep into Russian-illegally held territory.

These attacks are undoubtedly having a major symbolic and psychological effect on Russia and are boosting Ukrainian morale. As the balance on the ground seems to shift, Ukrainians are ever more determined to recover their national territory in full, as President Zelenskyy said at the Crimea Forum yesterday. And we have to be clear: Ukraine deserves our continued support to do just that. On this day, it is important to remember that the Russian aggression against Ukraine did not start on 24 February but dates back to the illegal annexation of the Crimean peninsula

As EU, we have to see what else we can do in terms of support to Ukraine and increasing the cost of this war for Russia. We will discuss this with EU Foreign and Defence Ministers in Prague next week, including on the issue of visas for Russian citizens and a possible EU training mission for Ukrainian armed forces.

In the coming weeks, the international community will have to stay the course on our triple strategy: supporting Ukraine, pressuring Russia and addressing the wider fall out of the war. This will be at the heart of the discussions at the UN General Assembly in New York in September.

Longer term, there is also the question of how we can not only end this war, but prevent another one from erupting in a few months or years from now. That includes important questions around how to enable Ukraine to defend itself as well as the issue of security guarantees.

Today, on Ukrainian Independence Day and six months after the start of the Russian attack, the best message we can give as EU is that we will continue to stand with Ukraine. Yes, the coming weeks and months will be very challenging. First of all for Ukrainians, who are paying with their lives, but also for all other Europeans. But we cannot reduce our commitments or lessen our resolve, even when the price goes up. At stake is the future of a fellow democracy and the wider principles of European and indeed global security. We must be prepared to pay this price: the price for our common freedom and our common security.