Strength Beyond All Odds… People with Albinism

“I used to be very afraid when going to school and struggling to concentrate on my studies” says Chinsisi, a 14-year-old brave boy with albinism defying odds to remain in school and study. Object of myths fuelled by superstition, people with albinism like Chinsisi, face multiple forms of discrimination worldwide. 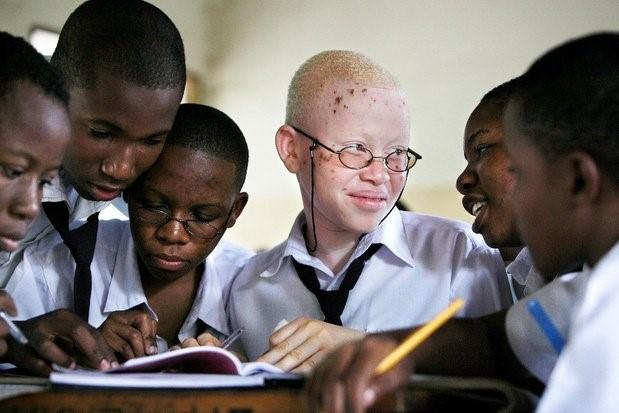 “On the international Albinism Awareness Day, 13th June, the EU stands up for persons with albinism around the world, supporting them in their fight for a life free of discrimination, stigmatisation and violence.”, the High Representative and Vice President of the European Commission, Josep Borrell, stated today.

Albinism is a genetically inherited condition that results in a lack of melanin pigment in the hair, skin and eyes. It occurs worldwide regardless of ethnicity or gender. Albinism causes vulnerability to sun exposure but, in addition to purely medical consequences of white skin, profound social and medical misunderstanding of albinism is source of deeply engraved stigma, discrimination and violence.

In a time when diversity is celebrated, children and adults with albinism experience multiple and significant violations of their basic human rights.

Because of their skin and the belief that they may be a source of misfortune, mothers of children with albinism are often rejected by their families and children with albinism are frequently abandoned and sometimes victims of infanticide. Lack of understanding and deep prejudices prevent access to appropriate health care, social services, employment and legal protection. Their access to education is often hindered by inappropriate accommodation for their vision impairment or for safety concerns.

While in the Western world their stigma often leads to name calling and bullying, in some African countries, deeply entrenched prejudices and beliefs have caused hundreds of cases of attacks and killings of persons with albinism. The COVID-19 pandemic has worsened human rights violations arising from accusations of witchcraft and ritual attacks.

The European Union continues to call for the effective investigation of crimes against people with albinism and for fair trials. At international level, the EU pursues its support to the UN Independent Expert on the Enjoyment of Human Rights by Persons with Albinism, and to the effective implementation of the regional Action Plan on Albinism in Africa 2017-2021, a continental response endorsed by the African Commission on Human and Peoples’ Rights.

In Malawi, going to school is a risky prospect for children with albinism. One in 130 people in Malawi has albinism, over 134,000 in total. Of these, 40 percent (about 53,000) are of primary and secondary school age. In some communities, they are attacked or even killed for their body parts, which are used to produce amulets and charms believed to have magical powers.

The 14-year old Chinsisi is one of those brave children with albinism defying the odds to remain in school and study.

“I used to be very afraid when going to school and struggling to concentrate on my studies before I received the alarm. Now this is one of my weapons against any threat that comes to me,” he says.

Chinsisi and other students with albinism received an alarm device for alerting people and security authorities when they face attacks. They have also been taught how to protect themselves, thanks to a collaboration between the school and the community, as part of the UN Joint Programme on Girls Education (JPGE).

When Chinsisi lost his father at age 4, many people in his village thought his future was over. “I have six siblings who are all looked after by my mother,” he says. “Fending for the entire family has been exceptionally difficult for my mother. Her fight for our survival motivates me to go to school and work hard, so that I can help my family in future.”

Being raised by a single mother in a poor family was always going to be difficult. Ten years on, there is a glimpse of a brighter future for Chinsisi. Read the full story.