On September 12, I had a videoconference with my fellow foreign ministers of the Association of Southeast Asian Nations (ASEAN). The European Union shares many common views with this organisation. And in particular the will not to align with China or the US in the growing strategic rivalry between them. We must and will strengthen our ties. 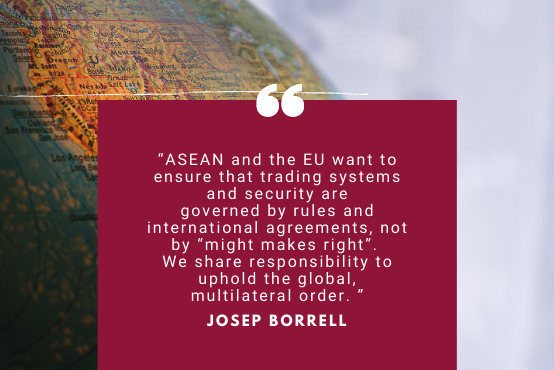 With its ten member states, this association, founded in 1967, now has a population of 650 million inhabitants, more than the 450 million of the European Union. In 2018, the combined GDP of the ASEAN has been $3 trillion, compared with $16 trillion for the European Union. The gap remains significant, but the economic growth experienced by the region has been very rapid in recent years: in 2000, the combined GDP of the 10 ASEAN member countries represented only $600 billion, so it has grown five times in less than 20 years...

The ASEAN countries have benefited in particular from the growing desire of many economic actors, whether Chinese or Western, to find places outside China, but in its vicinity, to set up production facilities or to find subcontractors in sectors such as textiles, electronics or automobile equipment. Less integration than in the European Union

The degree of integration of ASEAN is, however, hardly comparable for the moment with that of the European Union: unanimity remains the basic rule in all domains for decision making and the means available to the organisation's central bodies are still very limited. However, this could change under the impact of both the current crisis and the growing strategic rivalry between the United States and China.

“The shock of the COVID-19 crisis remains very strong in the ASEAN region. Especially since the social protection systems are still limited in those countries.”

The health crisis as such has been quite well managed by the ASEAN countries. However, the current economic crisis is expected to lead this year to a recession estimated at 2.6% of GDP in the region and unemployment is rising rapidly. Important sectors such as textiles, international tourism and automotive equipment sub-contracting are severely affected. The recession is indeed less severe than in Europe, but in a region where GDP grew by an average of 5.3 per cent per year between 2000 and 2018, the shock remains very strong. Especially since the social protection systems are still limited in those countries. 11 million people are at risk of falling into poverty this year in the ASEAN.

“Europe has mobilised over €800 million through the Team Europe initiative to help the ASEAN region to cope with the COVID-19 crisis, more than any other partner of the region."

Like in Europe, responses to the health crisis have started mainly on a national basis within ASEAN. However, in April ASEAN leaders announced the setting up of a COVID-19 Response Fund, an ASEAN Regional Reserve of Medical Supplies for Public Health Emergencies as well as consular assistance to ASEAN nationals. The European Union has not remained inactive to help the region to face that crisis. In ASEAN alone, we mobilised over €800 million through the Team Europe initiative, more than any other partner of the region.

Vaccine security, a battleground for influence in the region

The only viable exit strategy of the health crisis is a vaccine and that is the reason why vaccine security has become a new battleground for influence in the region. In August, China inked a deal with Indonesia for the supply of 40 million doses of vaccine from November 2020. Some days later, the Chinese Premier told the leaders of Cambodia, Laos, Myanmar, Thailand and Vietnam that China would provide them priority access to COVID-19 vaccines. Philippines' leader Duterte also claims that Beijing promised him an early vaccine. In parallel, a new US-ASEAN Health Futures initiative was launched last April focusing on joint research and health capacity, but the ASEAN disapproved of Washington’s decision to withdraw from the World Health Organisation.

For our part, we chose a multilateral response: the EU is mobilising €400 million in guarantees to support the COVAX initiative for a global supply of vaccines for citizens across the world, in poor and rich countries. We have proposed during our meeting that experts from EU and ASEAN get together to see how best we can cooperate on vaccine security.

The second priority for ASEAN, as for Europe, is of course to reboot the economy. US-China tensions and the pandemic will have long-term repercussions for ASEAN. US-China decoupling in high-tech and telecommunications, banking and finance could force Southeast Asian countries to make tough choices. Meanwhile the disruptions of the global value chain heavily hit manufacturing in ASEAN countries, forcing them to reflect on their positioning. On the other hand, countries such as Thailand, Vietnam, Indonesia, and the Philippines are hoping to benefit from the diversification away from China. Japan effectively encourages this trend, heavily subsidising domestic manufacturers to transfer their overseas production bases from China to Southeast Asia.

“Having been the number one source of Foreign direct investment (FDI) in ASEAN over many years, the EU is committed to stepping up our economic partnership to speed up recovery.”

Having been the number one source of Foreign direct investment (FDI) in ASEAN over many years, the EU is committed to stepping up our economic partnership. That means first to pursue our trade agenda: the free trade agreements between the EU and Singapore and Vietnam have entered into force last year and despite the impact of Covid-19, Singapore was able to export 12% more to us in the first six months after that. The EU is negotiating agreements with other ASEAN countries and we should pursue these with renewed urgency.

Building up on our numerous EU-ASEAN programmes

In parallel, we will build on our numerous EU-ASEAN programmes to facilitate trade and integration to speed up economic recovery. The launching of the EU-supported ASEAN Customs Transit System later this year is one example. We look also forward to finalise an Air Transport Agreement with ASEAN as soon as possible. The agreement would be the first of its kind, creating the world's biggest aviation market for over one billion people.

The EU cumulatively contributes also 50% of the €1.2 billion ASEAN Catalytic Green Finance Facility. An immediate common objective should be to establish an EU-ASEAN energy dialogue to tap into the potential of sustainable connectivity and the green recovery.

But the focus of ASEAN countries is not only on COVID-19 and recovery. Nowhere is the US-China rivalry more striking than in the South China Sea. Over the past few months, China challenged the territorial waters of its neighbours and intensified military activity.

“Around 30% of global trade goes through the South China Sea. The EU cannot allow countries to undermine international law and maritime security in that area.”

“The EU looks forward to the conclusion of the talks on a substantive and legally binding Code of Conduct in the South China Sea between ASEAN and his neighbours.”

All parties should refrain from the threat or use of force and from any provocative actions. Instead, they should resolve disputes through peaceful means, such as the dispute settlement mechanisms under the United Nations Convention on the Law of the Sea (UNCLOS). We look forward to the conclusion of the talks on an effective, substantive and legally binding Code of Conduct in the South China Sea between ASEAN and his neighbours, which should not prejudice the interests of third parties.

Asian security is closely linked to European security. That’s why, for example, we are working with our ASEAN partners to deploy counterterrorism advisors in several of our European Union Delegations across Asia. Last year, the EU signed also an agreement on Vietnam’s participation in our European military and civilian missions, which are deployed from the Indian Ocean to Africa. I hope it will be the first of many with our friends in ASEAN, because our missions do not only serve European interests. They serve the interest of peace and security in some of the most troubled parts of the world.

The US-China economic and geopolitical rivalry is making ASEAN increasingly uncomfortable. ASEAN does not want to be forced to align to any one partner. Instead, ASEAN swears by its own "centrality" which has long allowed the organisation to be the platform of choice for economic and security diplomacy. ASEAN adopted last year an "Outlook on the Indo-Pacific" built around four pillars – maritime security, connectivity, the Sustainable Development Goals, and economic cooperation - to assert the position of the association as the conduit for cooperation in the whole region. The EU will have also to work more in depth on his own Indo-Pacific policy in the near future. The German government recently adopted Indo-Pacific Guidelines, a useful contribution for that purpose.

The significance of the Regional Comprehensive Economic Partnership Agreement (RCEP)

In this context, the planned signature of the Regional Comprehensive Economic Partnership Agreement (RCEP), negotiated since 2012 with China, Japan, Korea, Australia and New Zealand at the ASEAN Summit next November has much gained in significance. Despite India dropping out the agreement, the signing of RCEP will be for ASEAN a major statement in favour of its own “centrality” and of an open multilateral trade system.

To summarise, while others choose to undercut multilateralism, ASEAN – like the EU – wants to ensure that trading systems and security are governed by rules and based on international agreements, not on the idea that “might makes right”. And neither ASEAN nor the EU are ready to become part of any “sphere of influence.”

“ASEAN will always find in the EU a trustworthy, reliable and predictable partner. We have only a clear and public agenda: to defend the rules-based international system. ”

Therefore I gave to my counterparts and to the public in the region the strong message that they will always find in the European Union a trustworthy, reliable and predictable partner. We have no hidden agenda, only a clear and public one: to defend the rules-based international system. And we share with ASEAN the special responsibility to uphold the global, multilateral order.

The EU-ASEAN partnership is no longer a luxury but a necessity.