HR/VP Blog - This week’s Foreign Affairs Council discussed the geopolitical consequences of Russia’s aggression against Ukraine. We agreed on our main work strands to face the global food and energy crisis and defend the rules-based international order. While continuing to support Ukraine, we have to engage further with third countries affected by Russia’s war. 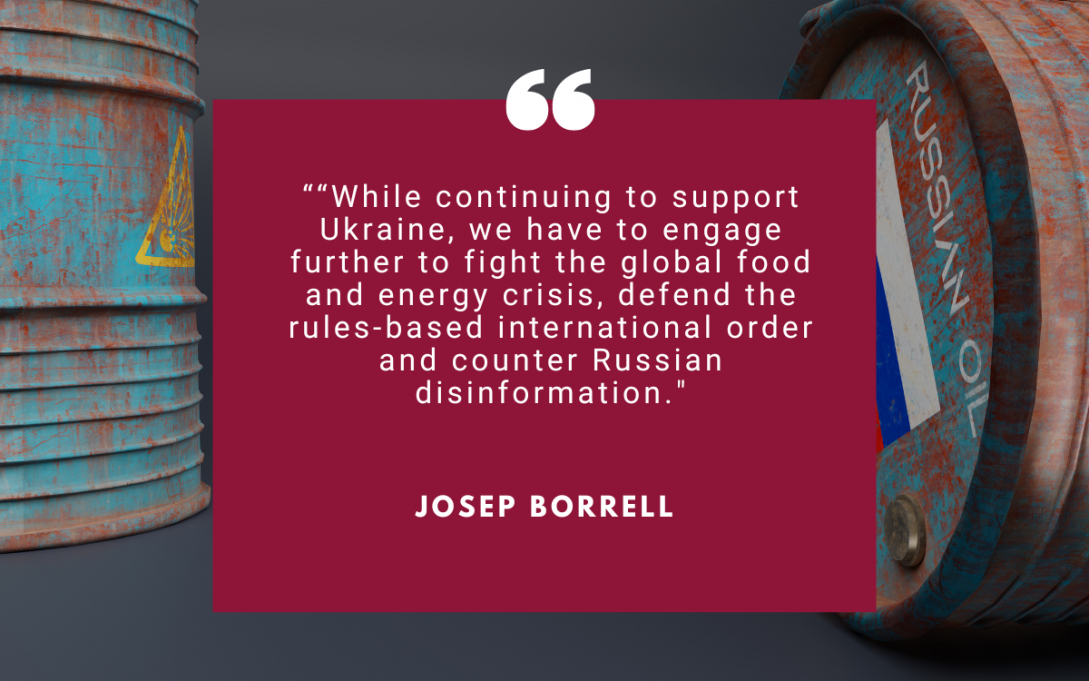 Russia’s invasion of Ukraine is sending shockwaves around the world with food insecurity growing, limited access to energy and rising inflation and debt. As the UN Global Crisis Response Group summarised it recently: “Billions of people face the greatest cost-of-living crisis in a generation”. These developments come on top of the global climate emergency and the COVID-19 pandemic and risk sparking social unrest and political destabilisation.

Russia’s war of aggression against Ukraine poses a direct challenge to the rules-based world order. We need to act to defend it and counter Russian disinformation.

During the UN General Assembly in March, a large majority of countries condemned the Russian aggression. However, it should not conceal the reality that most of our partners are focused on the consequences of the war, not the causes. Against this background, a false Russian narrative holding the EU responsible for the food crisis has been making inroads. We have to put the blame on those who deserve it: in addition to invading and destroying Ukraine, Russia is blocking 20 million tons of grains in Ukrainian storage facilities. Because of that, people at the other end of the planet risk suffer from hunger. This is a deliberate attempt to create political instability. Russia’s war of aggression poses a direct challenge to the rules-based world order. We need to act to defend it and counter Russian disinformation. This was at the centre of our discussions at our last Foreign Affairs Council.

Ukraine’s invasion is having an impact on all regions across the world. In the Western Balkans, Russian disinformation is prevalent and Russia has listed three countries (North Macedonia, Albania and Montenegro) as “unfriendly”, following their alignment with our sanctions. In this difficult context, a credible political commitment to the region’s European perspective is essential. However, by not being able to open this week the accession negotiations with Albania and North Macedonia, I must say that we are not where we should be with the region. We need to find a way forward without further delay.

By not being able to open this week the accession negotiations with Albania and North Macedonia, we are not where we should be with the Western Balkans region. We need to find a way forward without further delay.

The war also has a negative impact on tourism and the economy in Turkey. Turkey’s diplomatic engagement regarding the conflict – not least on the need to end the Black Sea blockade – calls for closer EU-Turkey cooperation but also vigilance to ensure non-circumvention of EU sanctions.

The war is also hitting the countries of the Eastern Partnership very severely. The multiple spill over effects are propelling the region to another recession, with risks of instability and insecurity. Ukraine and Moldova received the candidate status in the European Council. The European Council also sent a positive signal to Georgia: it should be granted candidate status once a number of priorities will have been addressed.

Belarus is now subject to sanctions similar to Russia but the majority of Eastern Partnership countries are looking more than ever to Europe for their connectivity needs, trade and foreign investment. Central Asian states, already under severe Russian pressure, are also heavily impacted by the negative spill over effects of the conflict, in particular trade disruptions, declining foreign remittances and currency fluctuations.

In the Southern Neighbourhood and across the Middle East, many countries are highly dependent on Russia and Ukraine for food and energy. Disruptions of trade flows caused by Russian invasion have already put huge pressure on them. Oil and gas producing countries are of course benefiting from high energy prices but in many other, rising commodity and food prices as well as reduced subsidies (due to a tightening of budgetary conditions), combined with severe droughts in some countries, may result in catastrophic hunger among the poorest and provoke new waves of social unrest, internal displacement and migration.

Africa is severely affected. The UN expects that close to 120 million people will be in “food crisis or worse” in Africa in 2022, particularly in the Horn of Africa and the Sahel.

Africa is also severely affected. Many countries heavily depend on Russia and Ukraine. As many as 25 African countries, including many least developed countries, import more than one third of their wheat from Ukraine and Russia and 15 of them over half. Wheat prices have risen by 60 % because of the war. The UN expects that close to 120 million people will be in “food crisis or worse” in Sub-Saharan Africa in 2022, particularly in the Horn of Africa and the Sahel. This is the result of a deliberate attempt by Russia to use food as a weapon of war, accompanied by the typical playbook of the Russian propaganda –creating a problem and then blaming the others, in this case the EU’s sanctions, although these sanctions do not apply to Russian grain or fertilizer exports. At the same time, we must listen to Africa’s concerns on this issue and we are ready to look into potential issues such as over compliance and market avoidance and provide the necessary clarifications to private actors about the real scope of our sanctions.

An uneven impact in Asia

In Asia, the overall economic impact of Russia’s invasion will be uneven across areas. The more advanced economies in the region have limited trade and investment links with Russia or Ukraine. However, for many others the impact is significant. This includes Indonesia (heavily dependent on wheat imports from Ukraine), Mongolia (with 98% energy dependence on Russia), Thailand, Pakistan, Bangladesh, Sri Lanka and Vietnam. China is probably not very comfortable with Russia’s violent escalation in Ukraine and concerned about the impact of the war on its wider economic interests. However, Beijing has so far refrained from using its leverage on Russia to help finding a peaceful resolution to the conflict. On the contrary, it is still expressing its public support to its ‘no limits’ partnership with Russia. India has so far sought to preserve its relations with Russia, which it sees as a crucial security and defence partner. India has also become the main international buyer of Russian oil, with often an important discount.

Russia’s war has widespread impacts on Latin America and the Caribbean. There also, higher energy and food prices will increase poverty, hunger and social tensions in a context of growing inequality, political polarisation and distrust in governments. Shortages in fertiliser supply will have a strong effect on Mexico, Peru, Brazil, Chile, Colombia and Argentina. Disruptions to the grain market will affect supply in countries such as Nicaragua, Haiti, Peru, Ecuador and Caribbean Islands. On the other hand, rising prices for key commodities will give some countries an economic boost (e.g. coal for Colombia, copper for Chile and Peru, wheat and soybean for Argentina). Politically, the Latin American region has broadly condemned Russia’s aggression. However, we cannot take this position for granted. We must intensify our engagement with the region to address concerns in some capitals that Russia’s war of aggression could deflect the EU’s attention away from LAC countries.

Latin America has broadly condemned Russia’s aggression. However, we cannot take this position for granted. We must intensify our engagement with the region.

Renewed political commitment, supported by concrete actions, will prove that the EU can help our partners mitigate the most immediate consequences of this conflict as well as improve their more long-term sustainable resilience. On Monday, we discussed following concrete actions strands for EU institutions and member states:

1. Food security: we are providing emergency funds to the regions and countries that are most affected. The EU together with its member states, has already committed €1 billion for the Sahel, €633 million for the Horn of Africa and €225 million for the Southern Neighbourhood countries. We will focus on support for resilience in over 70 countries, including the promotion of a more efficient use of, and alternatives to, fertilisers. We also help to get the millions of tons of Ukrainian grain onto global markets through the EU-Ukraine Solidarity Lanes Action Plan and by supporting UN efforts to reopen the Odessa harbour. In addition, we will strive to increase the EU’s own food exports.

2. Energy: with the RePowerEU plan, we are working full speed to reduce our dependency on Russian fossil fuels and helping to lower energy prices globally by further accelerating our green energy transition. We will also open the EU Energy platform for gas common purchasing to partners in the Western Balkans, Ukraine, Moldova and Georgia, as well as develop their connections to European electricity grids. To secure supplies, we are engaging with various partners on Liquefied Natural Gas (LNG), relaunching the EU-Algeria dialogue on gas, and exploring cooperation opportunities with African partners. We will also engage with partners to import 10 million tons of green hydrogen by 2030, via three major hydrogen corridors as

3. Macroeconomic risks: the EU’s global action is focusing on additional debt relief and macro-economic support by the international financial institutions. We will work within the G20 on an extended Common Framework for Debt Treatment. We also need to find ways to re-channel the advanced economies’ IMF Special Drawing Rights to low income countries.

5. Disinformation: we will address the concerns expressed in many developing countries regarding the alleged negative impact of EU sanctions and proactively counter Russia’s disinformation with facts and locally tailored messages. Wherever possible, we will develop partnerships with internet platforms, analysts, fact checkers, journalists and institutional partners to deal with pro-Kremlin disinformation.

We have a lot of work to do in the coming weeks. Strengthened EU solidarity with countries and regions most affected by the Russian aggression will help fight the global “battle of narratives” in which the whole world is involved.