With tensions rising at our eastern borders, unity remains our strength

HR/VP Blog - All of last week, our work on the European security situation and Russia’s aggressive actions against Ukraine continued, with EU Foreign Ministers meeting and the US and NATO sending their written responses to Russia’s “draft treaties”. We will stick to our twin tracks of diplomacy and deterrence and expand our support to Ukraine. 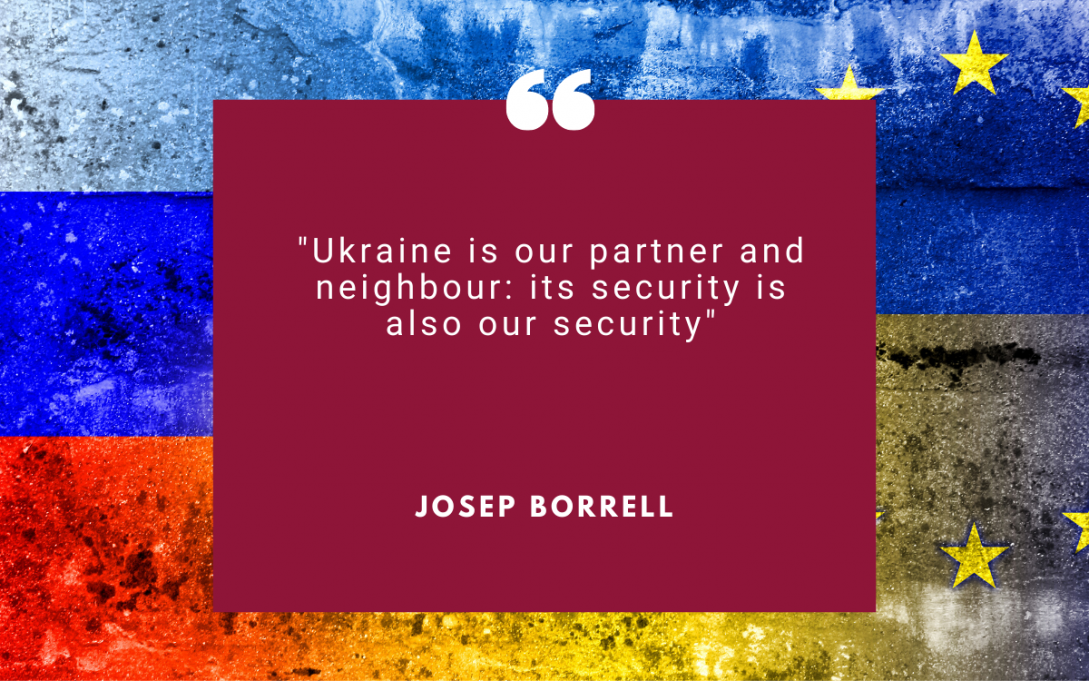 The crisis with Russia and Ukraine remains at the centre of today’s geopolitical tensions. Russia’s military build-up at the Ukrainian border has increased further and now includes preparations for military drills in Belarus, to be conducted just 18 km from the Ukrainian border. Moscow has also announced naval drills involving its fleets – including for instance in the North-Atlantic in front of the Irish coast- as well as military exercises inside Russia.

On our side, EU Foreign ministers met last Monday and formalised our decisions taken in Brest: we reaffirmed our unity opposing Russia’s attempt to re-create dividing lines on our continent. These bring back memories of ‘spheres of influence’, which do not belong to the 21st century and are unacceptable.  With Ministers, we agreed on the main elements that will guide our collective diplomatic efforts, to convince Russia to take the path of dialogue.

During our FAC meeting, we also had a substantive exchange with US Secretary of State Blinken. Transatlantic unity is key and we will continue our close coordination and cooperation, as we have been doing during this whole process.

"The United States and the European Union have been coordinating constantly, informing each other and discussing the next steps to take."

Some commentators have been expressing disappointment about the alleged absence of the European Union from the diplomatic process on the Russia/Ukraine conflict, saying that the EU is “not at the table”. While obviously the EU did not sit at the table of initial bilateral US-Russia and NATO-Russia meetings, it does not mean the EU has been absent from the wider and multi-layered set of diplomatic discussions. The United States and the European Union have been coordinating constantly, informing each other and discussing the next steps to take. I have been in close contact with the US Secretary of State with whom we also had an exchange with the NATO Secretary General and the Polish Foreign Minister, who currently is the OSCE Chairperson-in-Office and with the Ukrainian Foreign Minister. Of course, I am also in close touch with my French and German colleagues on the discussions in the Normandy format (France, Germany, Ukraine, Russia). It is very important that these Normandy talks started again on Wednesday in Paris, for the first time since 2019, and are set to continue in Berlin in the coming weeks.

Following this close transatlantic coordination, the US and NATO sent their respective written responses on Wednesday to the Russian demands published last December. Secretary Blinken and other US officials have made it clear in public that the response reiterates the concerns about Russia’s actions that undermine European security; it contains a principled and pragmatic evaluation of the concerns that Russia has raised; and proposals for areas where it may be possible to find common ground.

I welcome the US and NATO proposals: they have the potential – if negotiated in good faith – to enhance security in Europe, while also addressing Russia’s stated concerns through reciprocal commitments.

We aim to increase transparency and confidence, while underlining the need to respect the basic principles on which Europe's security is established, in particular respect for the national sovereignty and territorial integrity of European states and the right of states to choose their own security arrangements and alliances. Disputes must be resolved peacefully and not through the use or threat of force.

"We prefer diplomacy and are prepared to move forward, if Russia de-escalates its aggression toward Ukraine and approaches discussions about security in Europe in a balanced and reciprocal way."

Our ultimate interest is that reason prevails and that conflicts that have been increasing mistrust and antagonism within Europe in recent years are resolved through negotiations. Europe, as well as the United States, opt for peaceful and negotiated solutions and invite Russia to follow that path rather than armed aggression. We prefer diplomacy and are prepared to move forward, if Russia de-escalates its aggression toward Ukraine and approaches discussions about security in Europe in a balanced and reciprocal way.

On the security and defence side, we decided last month to use the European Peace Facility to increase the resilience capacity of the Ukrainian army. Right now, we are intensifying our work on how best to expand our support to Ukraine on the reform of its higher military education. I hope that member states can soon agree on these modalities, so that work can start.

Meanwhile, Kremlin disinformation around Ukraine is also intensifying, aimed at creating a very misleading impression of a besieged Russia, encircled by NATO and the West, who are cynically pushing Ukraine into conflict with Russia. In pro-Kremlin narratives, Kyiv is portrayed as a puppet, directed by a war-mongering West and preparing a provocation to start military operation to reclaim its own territory.

Besides being fundamentally wrong, such narratives increase tensions, aim at creating uncertainty and confusion in the public and at generating dangerous pretexts for escalating actions. As part of our fight against disinformation campaigns emanating from pro-Kremlin outlets,  our experts have identified and debunked more than 5,000 cases targeting Ukraine. We have exposed the seven most prevalent and dangerous myths about Ukraine.

We work closely with Ukrainian authorities and civil society to deliver technical and financial support to help them combat foreign information manipulation and interference. The recently established Ukrainian Centre for Strategic Communications and Information Security has already delivered good results in its first months of operation and will grow further. Ukraine can continue to count on the EU in this field.

The coercive actions against Ukraine have coincided with a cyber-attack. This month, a number of Ukrainian government websites and service platforms were defaced with deceptive messaging, and worse, destructive elements were found on some of the government IT systems and elsewhere in society.

Cyber-attacks are rarely used just to cause harm to technical systems. They are also aimed at triggering psychological effects, trying to delegitimize Ukrainian authorities and spreading distrust and fear among the general population.

Thankfully, Ukrainian authorities have reacted promptly and remedied the situation. This was a good example of the resilience of Ukrainian society against the pressures they are facing. The EU actively supports Ukraine in tackling cyber threats. In addition to the EU-Ukraine Cyber Dialogue, we have established strong cooperation, enabling us to assist Ukraine to increase its defences against cyber threats and attacks.

Most dangerous moment of the post-Cold War period

As I said earlier this week, we are living today through the most dangerous moment of the post-Cold War period. At the same time, we have to avoid further feeding an escalation spiral, and follow President Zelensky‘s calls to avoid any “panic”. In this vein, we agreed at last week’s FAC to maintain unchanged our diplomatic presence in Kyiv.

"Russia is waging a war of nerves – so we have to keep ours."

Russia is waging a war of nerves – so we have to keep ours. In this standoff, we are doing our best to make diplomacy work, using all possible paths. In this context, I deplore the decision by Russian authorities, announced on Friday, to ban an unknown number of representatives of EU member states and institutions from entry into Russia. This decision lacks any legal justification and transparency and will meet an appropriate response. With it, Russia continues to fuel a climate of tensions in Europe instead of contributing to de-escalation.

We are prepared in case diplomacy fails and we are looking at all options. This includes improving our resilience, including by working with partners like the US, Qatar and Azerbaijan, on the issue of gas supply in case Russia decides to reduce or halt deliveries.

As part of our work on deterrence, we have advanced with the preparations of a high-impact response that would inflict severe costs on the Russian economy and financial system. We are also considering export controls measures that would have a longer-term effect, by denying Russia products that it needs to fulfil its strategic ambitions. Member states in the Council will decide based on a proposal from me as High Representative. I am working closely with the Commission to ensure that our joint proposal on implementing measures will follow immediately my first proposal on establishing economic and financial sanctions, so that decisions are adopted as quickly as possible, if required.

As I said during my visit to Ukraine in early January, the European Union will not waver from its support to Ukraine’s sovereignty, its territorial integrity and its right of self-determination. Ukraine is our partner and neighbour: its security is our security.