Time to engage again for peace in Cyprus

HR/VP Blog – Last Friday I visited Nicosia to reiterate the EU’s strong support for the resumption of talks on a settlement of the Cyprus issue. We are at a crucial point: UN Secretary-General Guterres will convene an informal meeting in Geneva on 27-29 April in the hope of finding common ground to negotiate a lasting solution to this issue. 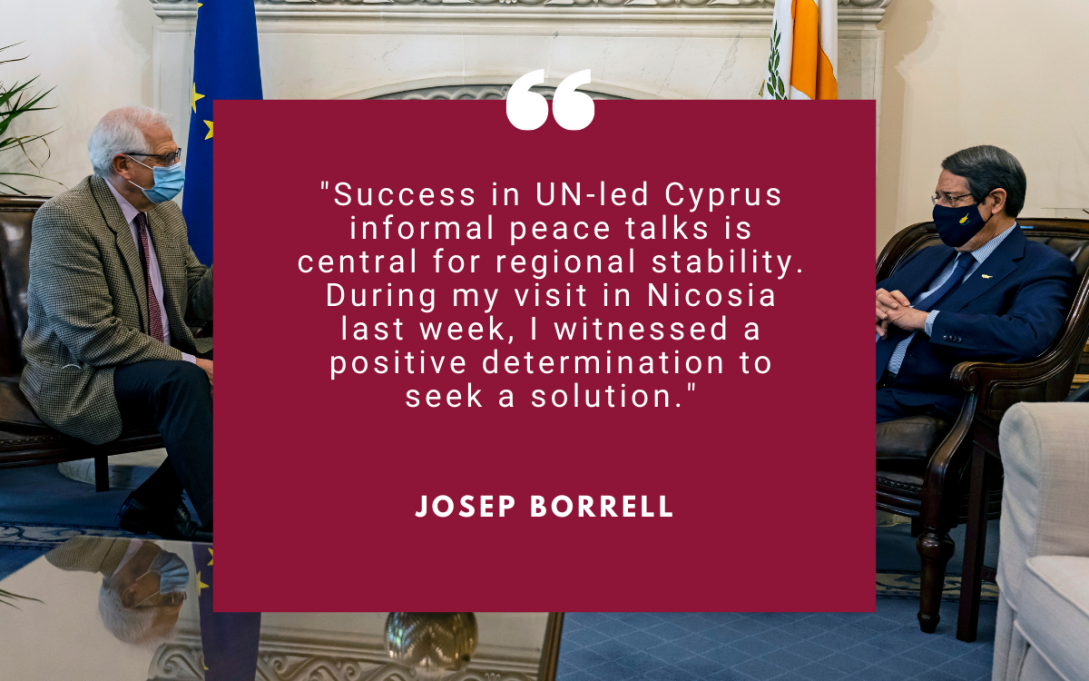 I started my visit by meeting with Elizabeth Spehar, Special Representative of the UN Secretary-General, and Colonel Neil Wright, Officer-in-Charge of the military component of the UN Peace Keeping Force in Cyprus (UNFICYP). They briefed me on the situation on the ground.

It was a reminder of the crucial role of United Nations peacekeeping operations and I pay tribute to the women and men who dedicate their careers, sometimes at the cost of their lives, for peace in the world. 186 members of UNFICYP have thus died on mission since 1964. Fortunately, no peacekeepers, nor citizens’ lives have been lost in Cyprus for years now. Nonetheless, it is a sobering reality that, with currently 802 soldiers on the ground, UNFICYP is one of the oldest of all UN peacekeeping missions: it operates on the island since 1964. 57 years later, the Cyprus problem remains one of the most difficult and longstanding conflicts in Europe. In 2007, I went to Cyprus as President of the European Parliament and it hurt my heart to find out that 14 years later the situation has not changed.

However, the present attempt to relaunch peace negotiations is not starting from scratch. We can build upon a legal framework and convergences from past negotiations. The UN has been very clear on the parameters for finding a lasting peace: UN Security Council Resolution 2561 of 29 January 2021 recalls the importance of achieving a comprehensive settlement based on a bicommunal, bizonal federation with political equality. The EU supports fully the UN line.

However, the solution to the Cyprus issue cannot come from outside. The responsibility for finding a solution lies first and foremost with the Cypriots themselves. We know it is going to be a complex process but during my meetings, I was encouraged by the readiness of both President Anastasiades and Turkish Cypriot leader Tatar to engage with the UN in order to find a common ground on the way forward. I felt a positive determination to return to talks and seek a solution.

The EU stands ready to provide whatever assistance both leaders and the UN would find most useful. The Cyprus problem is clearly an EU problem:  Cyprus is a member state of the Union, now and after reunification; regional stability and prosperity in the Eastern Mediterranean is closely bound  to a solution to the Cyprus problem.

A future settlement needs in particular to comply with the EU acquis and safeguards, the integrity and decision-making responsibilities and processes of the EU. The EU is an observer to the formal Conference on Cyprus. For above-mentioned reasons, the sooner the EU becomes fully involved in the renewed settlement talks, the better.

Turkish Cypriots are EU citizens and the EU has always been clear: the Cyprus’ EU membership is for the benefit of all Cypriots. EU direct aid has reflected this: since 2006, the EU has spent €600 million in aid for the Turkish Cypriot community; 1600 young Turkish Cypriots have received scholarships to study in the EU; the EU has helped to broker GSM network connectivity between the two Cypriot communities; cultural heritage in the Turkish Cypriot community have been restored with EU funds and there are many more examples. After years, we are now about to settle the question of the Protected Designation of Origin (PDO) for Halloumi/Helim cheese. Finally in the fight against COVID-19, the vaccines purchased through EU mechanisms will be shared equitably with all Cypriots no matter where on the island they live, with ratios based on population figures.

Of course, as referred to, the Cyprus issue matters also for the broader relations between Turkey and the European Union. These relations are equally approaching a turning point after a particularly difficult year 2020: the relative calm that we are currently experiencing at sea in the Eastern Mediterranean and on settlement related issues is tenuous. Progress in the Cyprus talks is more important than ever before.

Success is crucial for regional stability and overall world peace. After 57 years, being able to start considering a satisafctory ending of UNFICYP will bring rays of hope: conflicts can be solved and communities can find reconciliation and reap its benefits. The EU itself is a true model in this regard.