HR/VP Blog Post – One and a half years after the start of COVID-19 vaccines rollout, the EU can be proud of what it has achieved to help vaccinate the world, and in particular low- and middle-income countries. The EU’s record stands in contrast to what China and Russia did beyond the bluster of their noisy "vaccine diplomacy”. 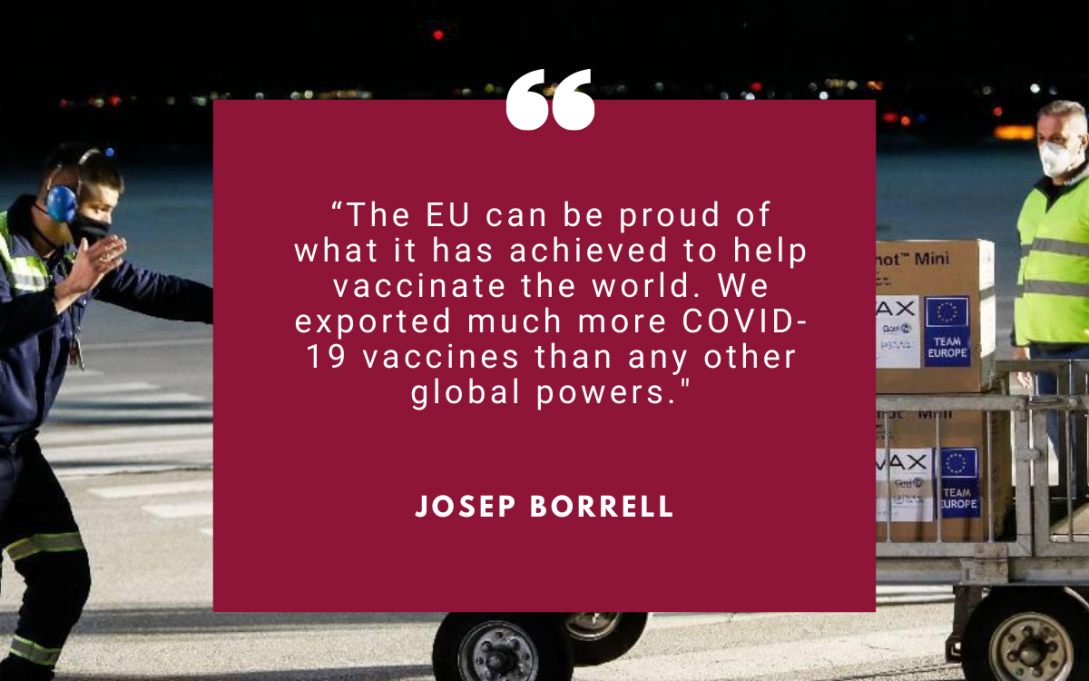 The COVID-19 pandemic is not yet over and every day there are still more than 500,000 active cases daily. However, the topic has slipped into the background almost everywhere, being replaced by the consequences of Vladimir Putin’s war of aggression against Ukraine and the sharp rise in energy and food prices that it has triggered.

The waning public attention for the pandemic has also reduced attention to the issue of vaccines. In 2021, as you will recall, the subject was not only dominating the headlines, but also at the centre of international relations, with major powers, and in particular China and Russia, conducting active "vaccine diplomacy" to extend their global influence by promising to provide vaccines to the world.

We had chosen to act in a multilateral framework, by supporting the COVAX facility. This meant that the European flag did not always appear on every batch of vaccine delivered thanks to us.

In this context, Europe was often criticised for not doing enough. From the outset, we had chosen to act in a multilateral framework, by supporting the COVAX facility launched by the WHO to jointly purchase and supply vaccines for low and middle-income countries. This meant that, unlike others, the European flag did not always appear on every batch of vaccine that was delivered thanks to us.

One and a half years after the start of vaccination campaigns, if we take stock of the situation, as the EEAS services have done recently based on data collected by the multilateral institutions, the EU has actually been by far the largest exporter of vaccines in the world. With 2.2 billion doses supplied to 167 countries, we exported almost twice as much vaccines as China, three times as much as the United States and 20 times as much as Russia.

Of these 2.2 billion exported doses, 475 million were donated to 104 countries, of which 405 million via COVAX and 70 million bilaterally, particularly in the Western Balkans and the Eastern Partnership. In terms of donations, the United States did slightly more than us, with 542 million doses donated to 117 countries. But we have actually donated far more vaccines than China – with just 130 million to 95 countries - and Russia – with only 1.5 million doses to 19 countries.

We have not only exported and donated vaccines but also helped to develop vaccines production in Africa: last year, the EU with its member states and financial institutions have committed over one billion euros to finance this development. By 2040, the African Union wants that 60% of the vaccines used on the continent are manufactured in Africa and the EU fully supports that goal. This year already, two factories will be installed in Rwanda and Senegal and commercial production is set to begin in 2023. Close cooperation is also ongoing with South Africa's Biovac Institute and with our partners in Ghana.

China has been the second largest commercial provider of COVID-19 vaccines globally, but it donated three times less vaccines that the EU and the US did respectively. China participates to COVAX and has sold 226 million doses to that multilateral facility, but has not donated any vaccine to COVAX. Crucially, China did not deliver also any mRNA vaccines, which have proven to be the most effective tool against the coronavirus including the new variants.

Russian vaccine diplomacy has been a total failure and this was already the case before the Russian war of aggression against Ukraine.

Russian vaccine diplomacy has been a total failure and this was already the case before the Russian war of aggression against Ukraine. In August 2020, President Putin announced that Russia had approved the first vaccine against COVID-19, labelled “Sputnik V”. However, the fact that it was approved before going into compulsory phase III clinical trials, breached relevant international protocols and ruined its reputation from the outset, including in Russia as demonstrated by a high degree of vaccine hesitancy. Sputnik V has never been approved by the World Health Organisation (WHO) and the European Medicines Agency (EMA), primarily because of a lack of transparency of Russian laboratories.

Sputnik V was heavily promoted via a professional international marketing campaign and Russia obtained commercial contracts for close to 800 million doses of Sputnik V. However,  up to now, Russia has only delivered 108 million doses, i.e. less than 15%. This has caused intense irritation among foreign governments and some are cancelling their procurement contracts (e.g. Guatemala). Many procurement deals were also contingent on WHO approval, which is not going to happen.

Russia also signed manufacturing agreements with no less than 23 countries to produce Sputnik V. However, only a few countries actually started production, due to delays in the supply of raw materials. Following the start of the Russian war of aggression in Ukraine, more manufacturing contracts have been cancelled. As one of very few countries, Russia stayed completely outside the COVAX Facility and it played no significant role in vaccine donations. In short, the vaccine diplomacy of these two countries can be summarised as “great expectations – broken promises”.

In short, the vaccine diplomacy of China and Russia can be summarised as “great expectations – broken promises

India is also an important player on vaccines. In the early phase of the vaccine rollout, India gave credit to its fame as “pharmacy of the world” by mass-producing the AstraZeneca vaccine at the world’s largest vaccine manufacturer, the Serum Institute of India (SII) in Pune. The Indian version of the vaccine became known as Covishield was later joined by India’s first own vaccine development Covaxin. India obtained WHO emergency use listing for both.

However, in view of a domestic pandemic surge, India halted all vaccine exports in April 2021. This decision constituted a major problem for the COVAX Facility, which at the time was quasi exclusively relying on the AstraZeneca vaccine. The Indian vaccine export ban had been lifted only in October 2021. Since then, India’s vaccines exports have not really recovered, with only 230 million doses exported to 100 countries, of which 15 millions have been donated.

In short, on COVID-19 vaccines, the EU has a lot to be proud of. Not only did we manage to vaccinate our own population against COVID-19 in a short period of time, but we have also been the world's largest exporter of vaccines and the second largest donor to low- and middle-income countries. We have accomplished much more in this area than China and Russia together. Building on this solid track record, the EU will continue to support access to vaccines worldwide, in particular by helping Africa to produce them.