"Virtual" session of the EUMC at CHODs level

On 5th November, the EU Chiefs of Defence (CHODs) met in videoconference for an informal meeting. 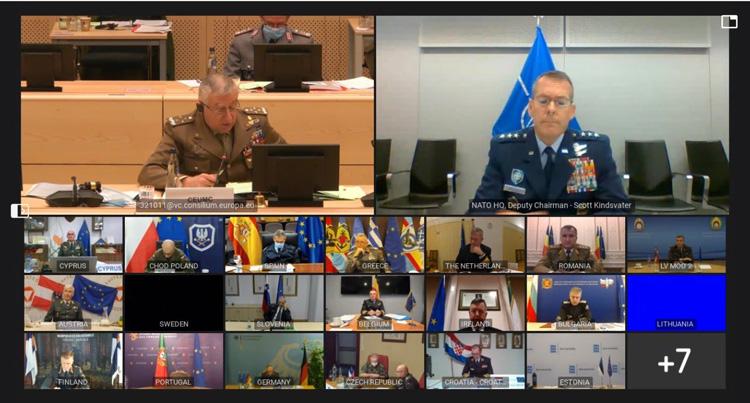 The meeting was opened by the Chairman of the EU military committee, General Graziano, who stressed that the “recent attacks in France and Austria show that COVID19 pandemic has amplified existing threats and is presenting us additional uncertainty, upcoming challenges and new actors”.

The HR/VP Mr. Borrell addressed the CHODs stressing the importance of the strategic autonomy and EU defence initiatives and culture. He underlined that COVID19 cases are rising again and Armed forces are called again to tackle the pandemic all around the Europe. The Chairman, on behalf of the EUMC, thanked the HR/VP for his interventions and recommendations.

Following, the EEAS deputy Secretary General for CSDP and crisis response Charles Fries briefed the EU CHODs about the latest developments related to the Strategic Compass and the Threat Analysis. The Chief Executive of the European Defence Agency (EDA) Jiří Šedivý provided his thoughts on how he envisages the supporting role of the EDA in contributing to the connection between the Military Capability development and the operational environment. The Defence, Industry and Space Director General, Timo Pesonen, explained how the new directorate could contribute in the context.

The discussion focused on the report the “Options for the evolution, the command and control structure and Terms of Reference of European Union Military Staff  and Military Planning Conduct Capability”, as well as the links between them.

“Enabling the EU Military Level of Ambition - Shaping the Headline Goal process in anticipation of Strategic Compass” is one of the points of the discussion. EU Common Security and  Defence Policy (CSDP) is at a timely juncture and there is a clear need for CHODs to discuss the military perspective, both as a contribution to the process that will guide the development of the Strategic Compass and as complement to the interim political guidance for the next Headline Goal process.

Successively, the Chairman of NATO military committee, Air Chief Marshal Sir Stuart Peach, joined the discussion focused on the EU-NATO cooperation. Gen. Graziano remarked that “EU-NATO relations isof the utmost importance and we should seize every single opportunity to strengthen it. We - he continued - still need to reinforce synergies between the two organisations, as a further step towards their closer interaction in real crisis operation”.

Closing the videoconference, General Graziano remarked the importance of military efforts within CSDP activities and said that “ We are living in challenging times. In this context, We need to remain committed, ready to contribute to the protection of European citizens and continue fulfilling the mandates of EU missions and operations”.