The war in Ukraine and its implications for the EU

HR/VP Blog - Putin’s war against Ukraine has already caused thousands of death but also major economic damages globally. We need to handle the impact of this third asymmetric shock in 15 years, at home and abroad. EU leaders agreed at the informal summit in Versailles to bolster European economic resilience, radically reduce our energy imports from Russia and move ahead with a serious strengthening of European defence. 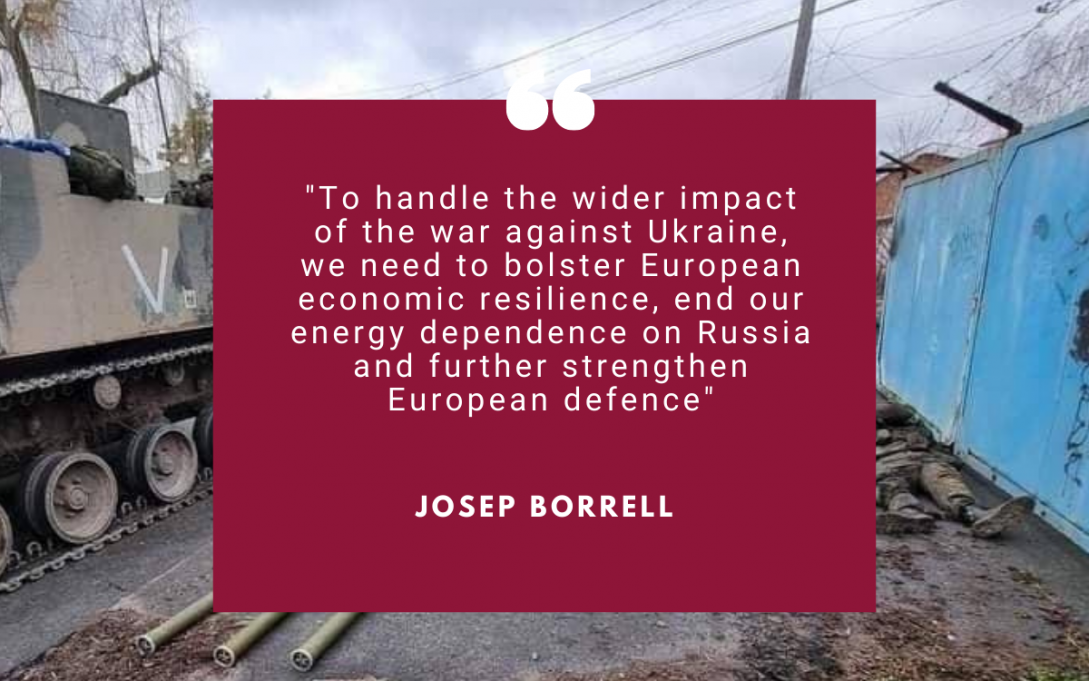 The war against Ukraine that Vladimir Putin started is already having considerable economic consequences in Russia, where the rouble has lost half its value and inflation is soaring. Moscow’s stock exchange is closed. Many international companies, like Ikea, McDonald’s, Visa and MasterCard have left the country. Russia’s economy is expected to shrink by at least 15% this year. Weakened and isolated, Russia risks becoming very dependent on China in the future.

The price of freedom and democracy

However, we are also seeing significant effects in Europe, with energy and other prices rising and probably set to continue to do so. We, inside the EU, have to accept to pay also a price to stop this outrageous and unprovoked war: the future of our security and our democracies depends on it. The price to pay is the price of freedom. The war in Ukraine is the third asymmetric shock, as economists call it, that the Union has experienced in the last two decades, after the 2008 financial and economic crisis and the following Eurozone crisis and the COVID-19 pandemic. An asymmetric shock is a sudden change in economic conditions that affects some EU countries more than others. The war in Ukraine is indeed having a much greater impact on neighbouring countries due to the influx of refugees and their heavy dependence on Russian gas.

To prevent asymmetric shocks from weakening the EU, we need to step up our capacity to show solidarity with the most affected countries. This is what we did after the 2008-2009 crisis, even if we were slow to do so. This is what we did facing the economic impact of the COVID-19 pandemic, both by pooling vaccine purchases and through the Next Generation EU plan. This is also what we need to do now. The consequences of the war in Ukraine were at the centre of the informal EU leaders meeting in Versailles. The heads of states and government agreed to phase out our dependence on Russian gas, oil and coal imports as soon as possible. It is not possible for us to continue to feed Vladimir Putin's war machine through our energy imports. The Commission will present, by the end of March, a plan to secure our supply in the coming winter season and specify by the end of May the details for the REPower EU plan to end our dependency to fossil fuels imports from Russia.

In parallel, the heads of states and governments will address the impact of rising energy prices on EU citizens and businesses at the next meeting of the European Council on 24-25 March. In particular, we probably need to rethink our wholesale electricity pricing system, which is currently driven for all energy sources by gas prices, even though gas-fired power generation is a very small fraction of the whole.

“The three ways of cutting our dependence on Russia are diversification of supplies, energy efficiency and the acceleration of renewables.”

This plan has many important internal implications for the EU, but also for its external policy. The three ways of cutting our dependence on Russia are diversification of supplies, energy efficiency and the acceleration of renewables. On the diversification front, we need to increase our purchases of Liquefied Natural Gas (LNG) from suppliers such as the US, Qatar, Norway, African producers and others.

To achieve this, we need in particular the infrastructure capable of receiving and processing LNG. These are currently very unevenly distributed in Europe with many in Spain, for example, but almost none in Germany or in the countries of Central and Eastern Europe. However, we currently lack sufficient pipeline connections between Spain and the rest of the continent. We will have to create new infrastructure and organise ourselves to pool these LNG supplies. In addition, we must reduce energy consumption in the EU and hence our need for gas, but also for oil and coal, for which Russia is also our main supplier. Otherwise, our efforts to reduce our dependence on Russia risk leading to a sharp rise in the EU’s overall energy bill. We also need to avoid simply replacing  one excessive external dependence with another.

At the same time, we have to accelerate the deployment of renewable energies: in 2020, almost all EU countries had exceeded the targets set in 2008 for the share of renewables, but there is still a need to reinforce this trend. This is the purpose of the Fit for 55 action plan proposed by the Commission last year to implement our emission reduction commitments made in Glasgow. We must accelerate its implementation.

The need to increase defence spending

Finally, this war will also force us to increase our defence spending. We need to spend more but above all to spend better, i.e. jointly. Some member states, such as Germany, have already taken important new measures in this area with €100 billion additional defence spending in 2022 and an increase of the defence budget to above 2 % of GDP from 2024. This must be the case everywhere where defence spending is still too low. Again, these are always painful decisions in a context of high public debt and scarce public resources, but Vladimir Putin clearly leaves us no choice.

"With the return of war to European soil, all of us in Europe must contribute more actively to taking responsibility for our own security. The Strategic Compass will provide a framework for using these additional means, ensuring full complementarity with NATO."

With the return of war to European soil, all of us in Europe must contribute more actively to taking responsibility for our own security. The Strategic Compass, which I have prepared and which we are in the process of adjusting to the new situation, should be adopted by the Foreign Affairs Council on 21 March. It will provide a framework for using these additional means in an efficient and coordinated way within the EU, ensuring full complementarity with NATO. With the European Defence Agency, we will also analyse the structure of our military spending and the investment gaps, and propose additional initiatives to strengthen the European defence industrial and technological base.

In addition, this war is already causing a massive influx of refugees into the European Union. As I write, more than 2 million people have crossed our borders and this number is expected to increase further in the days and weeks ahead, as long as Putin continues his aggression. Ukraine's EU neighbours have shown remarkable mobilisation and solidarity in welcoming these refugees. Here too, we already help the EU countries most directly concerned to cope with this influx and we will need to do more in the next future. But the refugees issue also raises the broader question of the renewal of our common policy on asylum and migration to build more solidarity, a process that began in 2020 but has not yet been finalised.

The war in Ukraine also makes it more urgent to prevent this conflict to spill over elsewhere in the world and to solve other crises. We have been working for a long time now to help find a political solution to the political and humanitarian crisis in Venezuela. We also need to reduce tensions in the Gulf region, which is closely linked to the resumption of the JCPoA, the Iranian nuclear deal, a file on which we have been working hard for many months. We must also monitor closely the situation in Western Balkans or in the Caucasus.

A negative impact on emerging and developing countries

This war will also have important repercussions for emerging and developing countries that are energy importers. They will suffer even more than us from the rise in the price of fossil fuels. And it is not just about energy. The impact on the market for grain, wheat but also maize, sunflower and fertiliser, for which Russia and Ukraine were major exporters, will also be significant. The prices of basic agricultural products were already high. They will probably increase further with major potential for creating suffering and political instability.

“We saw last year that developing countries had been hit harder than developed ones by the economic impact of the COVID-19 pandemic. The war in Ukraine may make things even worse with the risk of major unrests related to food and energy price hikes.”

We saw last year that developing countries had been hit harder than developed ones by the economic impact of the COVID-19 pandemic. World hunger and poverty had again increased significantly. The war in Ukraine may make things even worse in this respect with the risk of major unrests related to food and energy price hikes, as we have already seen in the past in comparable circumstances. Despite our own difficulties, we must therefore increase our support to poorer countries most affected by the indirect effects of this war, including in Africa and the Middle East.

With the invasion of Ukraine, Vladimir Putin is forcing us to urgently rethink many elements of our internal organisation and our worldview. We must rise to this challenge to defend our security and our democratic values.