We need to increase European defence capabilities, working better together

HR/VP Blog – The Russian invasion of Ukraine has been a wake-up call for EU security and defence. This week’s Joint Communication on Defence Investment Gaps explains clearly that, due to underinvestment, the defence capabilities we have do not match the ones we need for the threats we face. The reports of the European Defence Agency (EDA) already warned about this, but before the war started, there was no commons sense of urgency to increase defence spending. Now the issue is not only to spend more, but to spend together – because this is the only way of spending better. 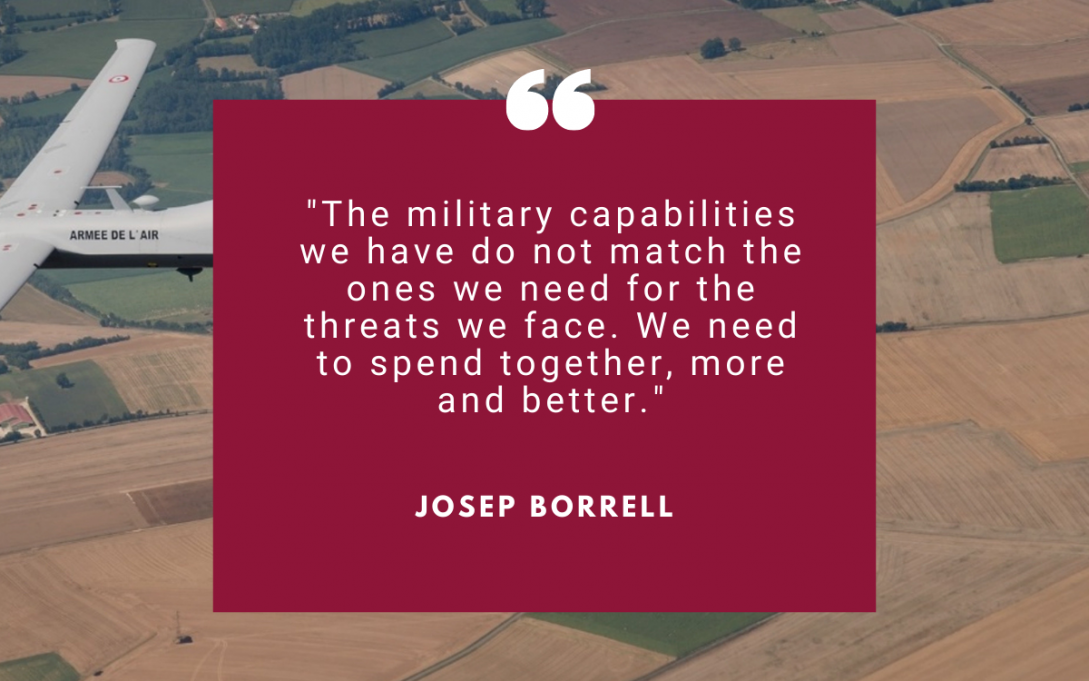 Russia´s ruthless assault on Ukraine brought war back to European soil. By the number of military assets involved in the war, its human costs and the global consequences, it represents a tectonic shift of the European security landscape. Confronted with this conflict, the EU has reacted quickly and strongly, by offering political, financial, humanitarian and military support to Ukraine. Now it is clear that Europe is in danger, as we claimed before the start of the war when we presented the Strategic Compass, which since has been approved by the Council and offers a plan for a real step change for a stronger and united security and defence policy.

The new security environment demonstrates that the EU needs to take on more responsibility for its own security. For this, we need modern and interoperable European armed forces, looking at the higher-end of the spectrum and also striving to scale up capabilities and forces. The depleted stockpiles resulting from the military support we provided to Ukraine are the most obvious example of our shortfalls. However, this comes on top of the ones inherited from past budget cuts and underinvestment.

The below figure reflects how the aggregated defence expenditure of EU members states has been decreasing since the beginning of the eurocrisis in 2008, reaching a bottom in 2014 – when Russia annexed Crimea – and just now reaching pre-crisis levels (see factsheet that accompanied the Joint Communication with more data here). This figure has become very popular and there have been a lot of references to it last week. However, it is not a recent “discovery”, but was already presented in a December 2021 EDA report. In this report, the EDA (which has been created by the Lisbon Treaty to support member states to improve military capabilities and identify development priorities) highlighted not only the big “hole” in defence expenditure, but also the persistent reduction of collaborative investment among member states.

“Data shows a silent process of underinvestment in the European armies.”

Data shows a silent process of underinvestment in the European armies and budget cuts imposed by austerity policies. I am not discussing here the pertinence of these cuts and the political decisions that were behind them. However, it is good to be aware in order to evaluate future expenditure policies in moments when budgets might again be tightened.

It is also important to note the lack of coordination in the context of which these reductions were done: in 2020, only 11% of investments were spent collaboratively – which is be­low the 35% benchmark agreed by member states in the EDA framework. The challenge today is to coordinate better the process of increasing expenditures and to avoid increasing the duplications and gaps. The gaps we face

In fact, we are facing a variety of gaps: when it comes to total military capabilities, to general defence investment, to research and development, and to comparisons with other countries’ military developments.

Some key figures illustrate some of these gaps:

All these figures illustrate trends and shortcoming that we need to tackle and it is against this backdrop that EU leaders in Versailles asked for a defence investment gaps analysis. The recently adopted Strategic Compass, already sets out an ambitious plan for strengthening the EU's security and defence policy by 2030 and we have to move forward in this spirit.

“All these figures illustrate trends and shortcoming that we need to tackle.”

In the last weeks, many member states have announced increases in their defence spending. This is very positive. However, as I said before, it is crucial that they do not only spend more, but also better together to prevent further fragmentation. Allow me to insist on this idea, because if every member state increases its defence spending, multiplying by “x” its current expenditure by investing on its own without European coordination, the result is likely to be a waste of money, with the risk of multiplying existing loopholes and needless duplications.

This is why the Joint Communication we presented this week, with my Commission colleagues Margrethe Vestager and Thierry Breton, features concrete proposals on how to promote cooperation on defence investment and strengthen the European defence industrial and technological base.

From diagnosis to action

The EDA has provided the preliminary analysis of the defence gaps, building on the work done through the Capability Development Plan (CDP) and the Coordinated Annual Review on Defence (CARD).

In a nutshell, three main lines of actions have been identified. Member states must:

“As ever, we need political will and leadership.”

We will create a joint Task Force to support short-term procurement needs and to encourage member states to buy together. Within this Task Force, EDA can already facilitate such short-term joint procurement building on its expertise and experience in this field. The Commission will also launch an instrument to reinforce European defence industrial capabilities through joint procurement and will propose a European Defence Investment Programme Regulation.

In addition, we will look into strengthening the budgets of the European Defence Fund and military mobility through the Connecting Europe Facility. Finally, we propose for the European Invest Bank (EIB) to assess in cooperation with EDA how it can support the European defence industry to develop critical technologies and industrial capacities with joint procurement.

As ever, we need political will and leadership, and rising defence expenditures offer us a one-off opportunity to fix some of the long-standing issues that have hampered the EU’s defence efforts.