On 10 June, the EEAS launched the 4th edition of the campaign “Europeans making a difference” bringing the campaign protagonists for an event that was organised in partnership with the Italian Cultural Institute in Paris, where the event took place. Taking place in the French capital, the event brought an interesting debate to the Member State that holds the Presidency of the EU. 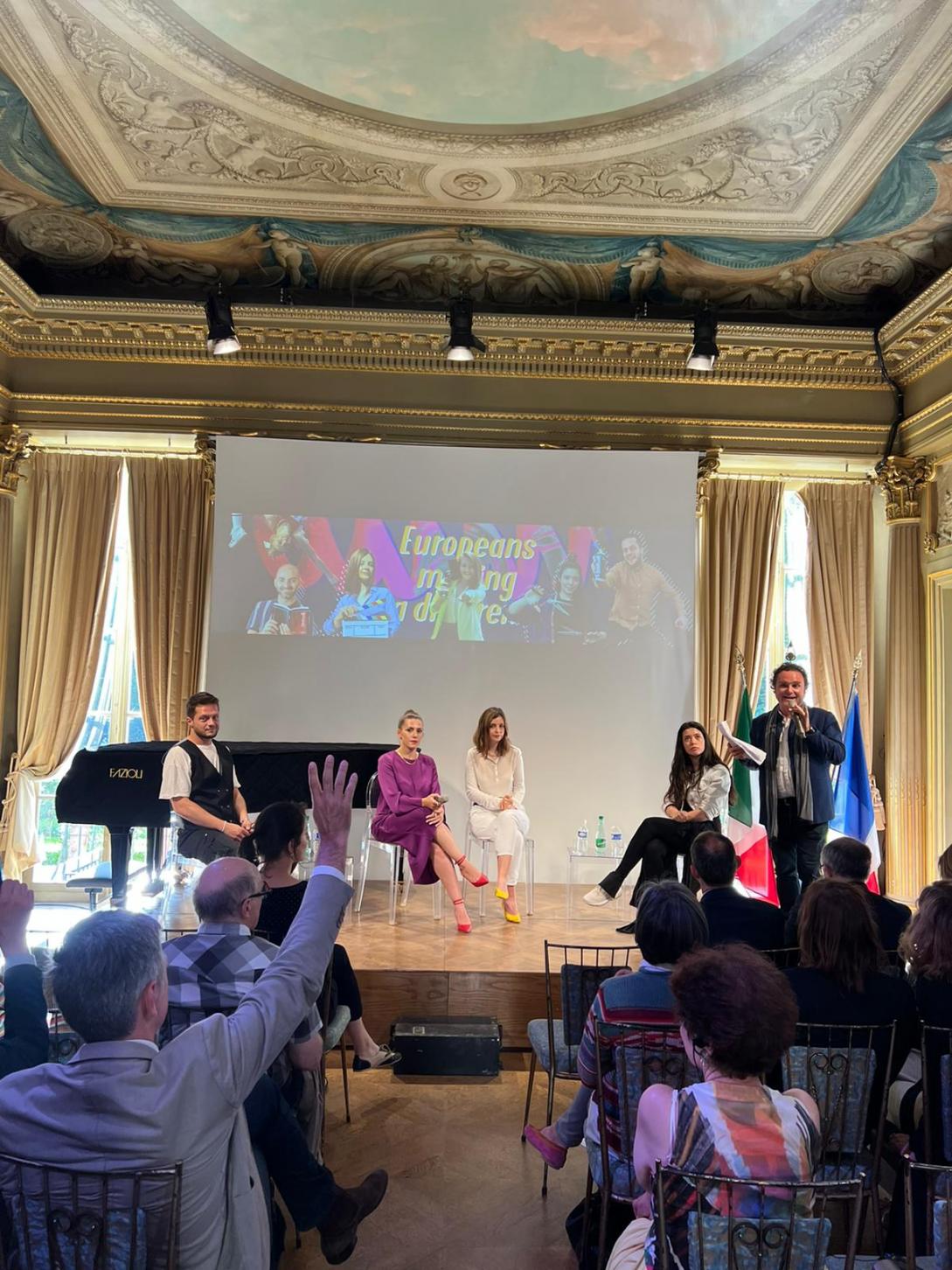 The new edition of the campaign portrays six young Europeans from the Western Balkans who do things that matter, in the region and far beyond – through fighting for human rights, painting to pass important messages, raising awareness about online hate, jumping over the highest bars.

Amaël Cattaruzza, the President Le Courrier des Balkans, an organisation that also partnered with the EEAS for this event, moderated a panel discussion with the campaign protagonists Nevena Ivanović from Belgrade, Benjamin Čengić from Sarajevo , Artes Ferruni from Tirana and Dina Duma from Skopje.

Addressing the audience that attended the event in Paris as well those that followed it via live streaming, Nicolas Faye, Head of Western Balkans Department of the French Ministry for European and Foreign Affairs stated that “The Western Balkans have been a priority for the French Presidency. Today’s initiative shows young people from the Western Balkans who create and bring their contribution to the EU. This campaign give us an accurate and positive image of the region. They are Europeans who make the difference”, Faye said.

This year’s European making a difference from Serbia Nevena Ivanović is a costume designer, art director and entrepreneur from Serbia. Her work explores the issue of identity and promotes inclusivity. Asked about her unique work on designing for people with disabilities she explained that nobody should be excluded. “Facing a concrete situation of a friend who ended up with a prosthetic leg, we decided to design a piece of clothing for all people in that situation. That led us to create a completely new piece of clothing that no one has made before. We created it from scratch, said Nevena adding she felt that was her most important project so far”.

Benjamin Čengić from Bosnia and Herzegovina, a street artist and producer of art projects, active in the Fasada street art festival in Sarajevo, where murals are created with environmentally-friendly painted explained how art can be effectively used for reconciliation. “We bring artists together, we give them paint, brushes and tools and an opportunity to create together. This is a way for them to share their thoughts, their ideas, and a way to approach different issues. "

“The world is shaped by the stories we tell to each other”, said Artes Ferruni, an online content creator and filmmaker from Albania. She has taught content creation to hundreds of students all around the world. “With understanding new media, you can have an impact on very important topics, like the environment for example. Young people will be the generation that will really make the difference, and I hope everyone realises we can do that through storytelling, regardless of our profession.”

Dina Duma, a screenwriter and film director from North Macedonia, is the author of the film Sisterhood, the first film from the Western Balkans to be streamed on Netflix. Her film deals with problems related to the use of social media, issues of online hate speech, cyber bullying and slut-shaming among youth. “I thought the story I worked on was local but when the film started touring different festivals and countries, I connected with the audience and realised how big and global this problem is. Most of the audience that saw my film were parents of teenagers or teenagers themselves, who could really relate to it. It opened a discussion, also in my country. No one spoke about these problems before, but this started a debate and now I see some changes are starting to happen.”

Marija Vuković, a high jump athlete from Montenegro with a current record at 1.97m, and Arbër Selmani, a human rights activist, a writer and a journalist from Kosovo, are also part of the campaign.

The portraits of the protagonists will be released on EEAS social media channels over the next few weeks.

European Making a Difference (EMAD) is an EEAS social media campaign portraying inspiring individuals and changemakers from the Western Balkans who complete the picture of the Western Balkans abroad. The campaign is a platform for the people from the region who through their ideas, talent, dedication to their work make an important contribution to their communities and beyond, in that way contributing to our lives in Europe and all over the world.

The fourth edition of the campaign focused on young Europeans from the Western Balkans in the spirit of the European Year of Youth 2022, emphasising the importance of European youth for building a better, greener, more inclusive and digital future.