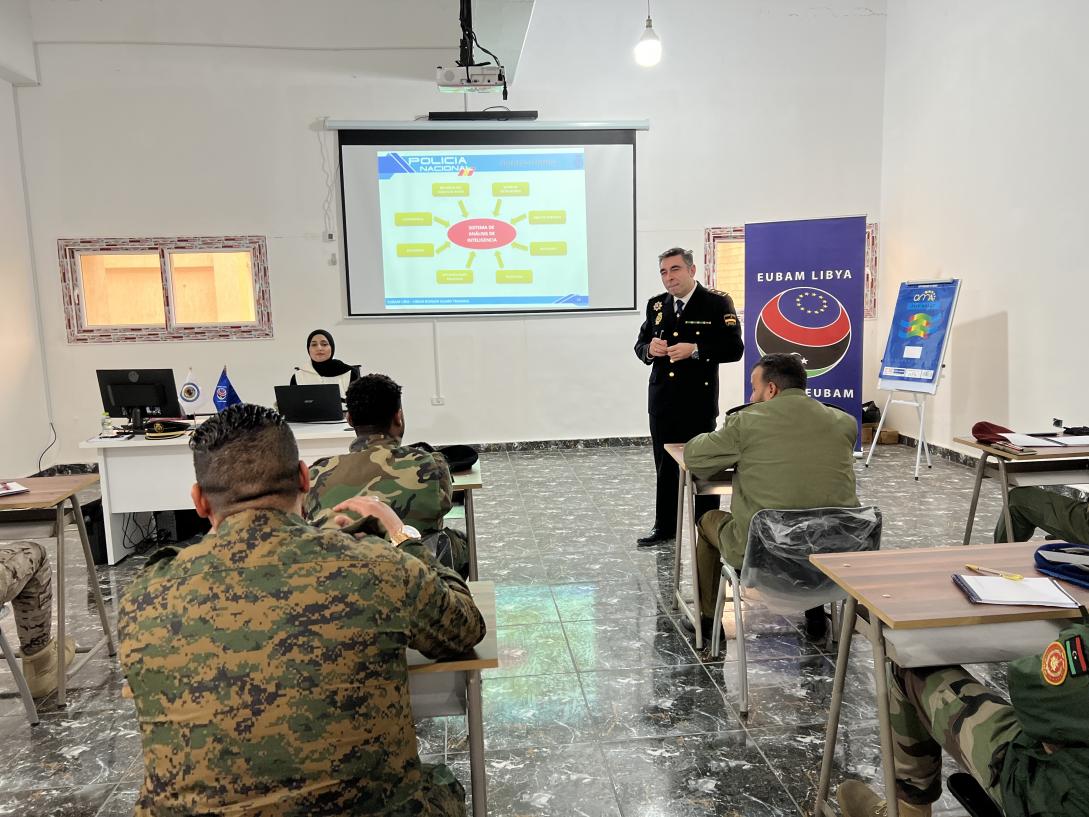 EUBAM Libya organized two training courses on criminal intelligence in Tripoli in cooperation with the Spanish National Police. The training program will include one-week workshop in Madrid and in the mid of February 2023 a train of trainers (ToT) seminar in Tripoli. In this framework of the support to the Libyan border authorities, this week started a basic training course on criminal intelligence for the Libyan Border Guards.

The so called MP21 is a specialized training on criminal intelligence for various agencies of the Libyan Ministry of Interior and Libyan Border Guards and consists of three different training modules.

The first week EUBAM and Spanish experts conducted basic training for the officials from agencies subordinated to the Libyan Ministry of Interior and issued them their certificates. At the closing ceremony the Spanish Ambassador and the Spanish Police Attaché were present. EUBAM Libya’s Head of Operations delivered a speech about the goal of these workshops. The training, aiming at improving the gathering, analysis and distribution of information, will be followed by the delivery of IT equipment.

The Spanish Ambassador emphasized the importance of the cooperation with Libya and EUBAM. The Mission’s Head of Operations expressed the willingness of the Mission for the successful further cooperation with the General Administration for Security Operation (GASO) and thanked Spain for its contribution.

The Commander of the Border Guard Training Center Brigadier General Fawzi Al-Fiqi confirmed that “This training came to serve and support the border guards in their duties, it is suitable for them, as the participants will be able to apply and implement what is presented to them during the training on the ground in the future. I would like to thank the EUBAM mission for its continuous support of the border guards.”

The EUBAM Border Management Unit – based on the security analyses – identified, that one of the main security problems Libya faces today is protecting its citizens from organized crime and terrorism. To address the mentioned threats, which have a direct impact on the border management, the criminal intelligence gathering, analysis and its distribution to the competent national agencies have proven to be a key tool to ensure border security.