The European Union Training Mission in Central African Republic (EUTM CAR) was honored to host the Director of the Military Planning and Conduct Capability (MPCC), Vice Admiral Herve Bléjean in the change of command ceremony that took place February 3, 2022 at the Camp M' Poko in Bangui. 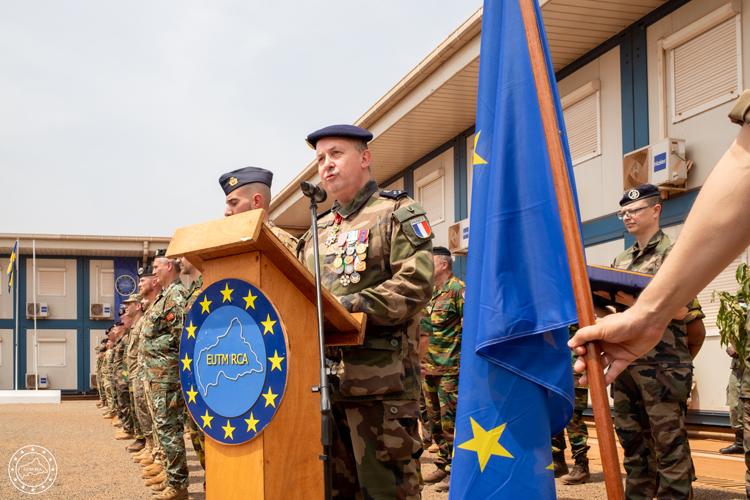 In the presence of the President of the Central African Republic, His Excellency Professor Faustin Archange Touadera, the Director of the MPCC officially transferred the Command from Brigadier General Jacques Langlade de Montgros from France to Brigadier General Jacky Cabo from Belgium.

EUTM CAR was launched the 16 July 2016, at the request of the Central African Republic’s government, for an initial period of two years. The 30 July 2020, the Council of the European Union renewed the EUTM CAR's mandate, up to 19 September 2022. EUTM CAR up to now has made a substantial contribution to the reconstruction of the Central African national defence within the framework of the National Defence Plan. In over 5 years, the mission has trained 7 battalions. At the same time, 50% of the cadres and more than 9,000 Central African soldiers have benefited from training provided by EUTM CAR. The transfer of authority between the French General de Montgros and the Belgian General Cabo illustrates the continuity of the EUTM CAR mission, which, despite its temporary and reversible adjustment, continues to be at the service of the FACA within the framework of the strategic advice on which it now focuses. In EUTM CAR, 170 soldiers from 15 different nations will serve under the European flag for the next 5 months.

After praising the work of his predecessor, General Cabo stated in his speech:  "It is an honor for me to take over Command of the EUTM mission. This mission remains first and foremost a military mission, but its success depends primarily on maintaining an open dialogue with both the military and civilian authorities. I therefore look forward to working together in the coming months to improve the security situation in Central Africa Republic to the benefit of the stability in the region".