The Euro celebrates its 20th anniversary

Twenty years ago, on 1 January 2002, twelve EU countries changed their national currency banknotes and coins for the euro in the largest currency changeover in history. In these two decades, the euro has contributed to the stability, competitiveness and prosperity of European economies. Most importantly, it has improved the lives of citizens and made it easier to do business across Europe and beyond. 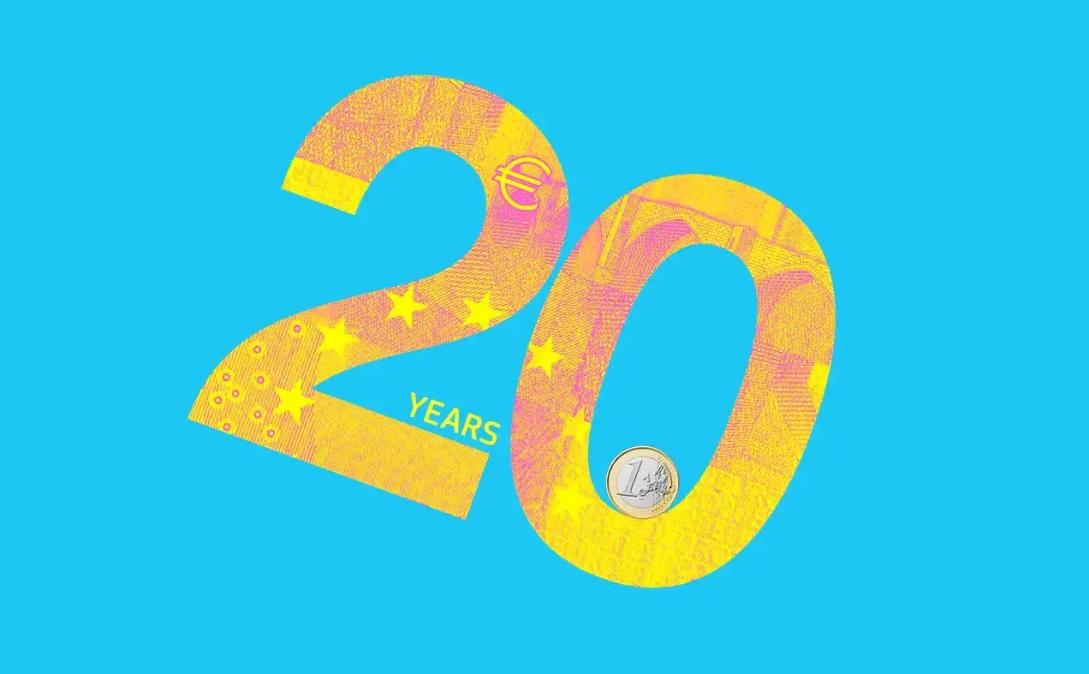 Ursula von der Leyen, President of the European Commission, said: “It is now twenty years that we, European people, can carry Europe in our pockets. The euro is not just one of the most powerful currencies in the world. It is, first and foremost, a symbol of European unity. <…> The euro is also the currency of the future, and in the coming years it will become a digital currency too. The euro also reflects our values. The world we want to live in. It is the global currency for sustainable investments. We can all be proud of that.”

Facts about the euro

2nd most important currency in the world

The proportion of international payments made in euros and US dollars is roughly equal and the euro is the world’s second favourite currency for borrowing, lending and central bank reserves. Over half of global green bond issuance is denominated in euro.

The euro is shared by over 340 million Europeans. Sixty countries and territories, representing 175 million people, have pegged their own currencies to the euro either directly or indirectly.

In August 2021, there were 27.4 billion euro banknotes in circulation with a value of about €1.5 trillion.

The 50 euro note is the most widely used in the euro area, with more than 13 billion banknotes in circulation.

There are almost 140 billion coins in circulation, with a total value of over €31 billion.

The euro symbol – € – was inspired by the Greek letter epsilon (Є), a reference to the cradle of European civilisation. It also stands for the first letter of the word ‘Europe’ in the Latin alphabet, while the two parallel lines running through the symbol signify stability.

The design of the euro banknotes is based on the different architectural styles that have emerged throughout Europe’s history and have marked its culture. On the front of the banknotes, windows and doorways symbolise the European spirit of openness and cooperation. On the back, bridges symbolise communication between the people of Europe and between Europe and the rest of the world.

The styles shown are:

The euro coins have a common side and a national side. The national sides indicate the issuing country, whereas the common sides show images of the European Union or of Europe and symbolise the unity of the EU.

On banknotes of the Europa series, the name of the currency has been written in the Cyrillic alphabet (EBPO) since Bulgaria joined the European Union in 2007, in addition to the Latin (EURO) and Greek (EYPΩ) alphabets.

Key milestones of a long journey to the euro

The euro has come a long way from the early discussions on an Economic and Monetary Union in the late 1960s.

Europe's leaders set up a high-level group led by Pierre Werner, the Luxembourg Prime Minister at the time, to report on how an Economic and Monetary Union (EMU) could be achieved within 10 years. The resulting report is issued in October 1970.

Specific steps towards a single currency were first approached in 1988 by the Delors Committee: ‘one market, one money’.

The Maastricht Treaty marked a decisive moment in the move towards the euro, as political leaders signed on the criteria that Member States had to meet to adopt the single currency.

The European Monetary Institute (EMI) started its preparatory work in Frankfurt for the European Central Bank (ECB) to assume its responsibility for monetary policy in the euro area. As a result, on 1 June 1998, the ECB became operational.

The euro was launched in 11 Member States as an accounting currency on financial markets and used for electronic payments.

It was finally on 1 January 2002 when Austria, Belgium, Finland, France, Germany, Greece, Ireland, Italy, Luxembourg, the Netherlands, Portugal and Spain swapped their national notes and coins for euros. Slovenia joined the euro area in 2007, followed by Cyprus and Malta (2008), Slovakia (2009), Estonia (2011), Latvia (2014) and Lithuania (2015). Currently, Croatia is taking the preparatory steps to join the euro area, which it plans to do on 1 January 2023, provided it fulfils all the convergence criteria.

As it celebrates this 20th anniversary, the EU continues the work to strengthen the international role of the euro and adapt it to new challenges, including the rapid digitalisation of the economy and the development of virtual currencies.

The Commission and the ECB are currently investigating whether to create a digital euro. A digital form of central bank money would offer greater choice to consumers and businesses. Given its potential as an innovative and safe means of payment, a digital euro could support the EU’s digital transition with possibly new financial services and also increase the international role of the euro.

The euro on its 20th anniversary