The European Union Election Observation Mission (EU EOM) to The Gambia has released its Final Report, providing a comprehensive assessment of the electoral process against The Gambia’s laws, as well as its regional and international commitments to democratic elections. The Final Report also includes a list of 31 recommendations for consideration by the authorities and other electoral stakeholders on how to improve future elections, granting the electorate full enjoyment of fundamental rights and freedoms. 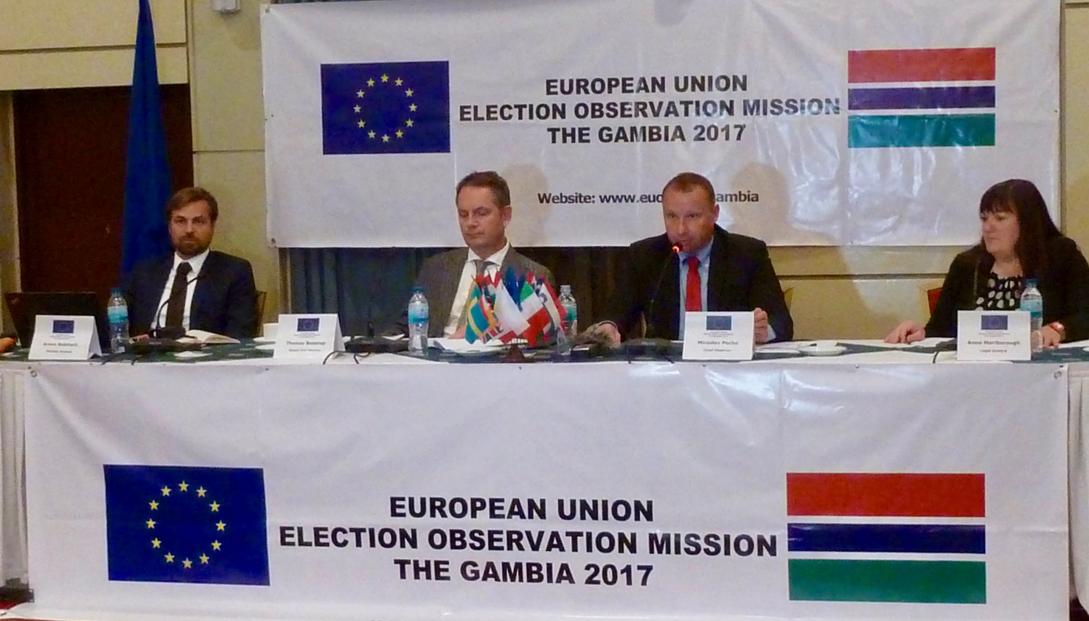 The European Union Election Observation Mission (EU EOM) to The Gambia has released its Final Report, providing a comprehensive assessment of the electoral process against The Gambia’s laws, as well as its regional and international commitments to democratic elections. The Final Report also includes a list of 31 recommendations for consideration by the authorities and other electoral stakeholders on how to improve future elections, granting the electorate full enjoyment of fundamental rights and freedoms.

The Final Report follows up on the mission’s Preliminary Statement, released at a press conference in Banjul on 8 April. The mission’s initial conclusion was - “Goodwill on behalf of the people and institutions of The Gambia provided for the restoration of key democratic rights”.

The EU EOM concluded that the broad trust in the Independent Electoral Commission (IEC) coupled with a genuine political competition offset the notable shortcomings in the electoral legal framework. The engaging and peaceful campaign was followed by an orderly election day. However, the collation of results lacked transparency and significant differences as to the number of voters per constituency impacted on the equality of the vote. While the media strove to equip voters with knowledge crucial to making informed choices, and organised debates between candidates, a genuine editorial independence of the public broadcaster is yet to be achieved. The post-election environment was marked by public pronouncements from some political leaders critical of the presidential tour and its impact on the campaign, yet formal complaints were not submitted.

“These, in many ways very challenging, elections were a decisive step in The Gambia’s democratic transition. The European Union, as a friend and a partner of The Gambia, stands ready to support the efforts of the authorities and other electoral stakeholders to follow up on the recommendations that are listed in our Final Report,” stated the EU EOM to The Gambia Chief Observer Miroslav Poche, Member of the European Parliament from the Czech Republic. The EU EOM was deployed on 13 March 2017, following an invitation from the IEC, and on election day comprised over 50 observers deployed across the country. The EU EOM members were drawn from EU Member States, as well as Norway and Switzerland.

This week the Chief Observer presented the mission’s Final Report and recommendations to the IEC, the Government of The Gambia, political parties and civil society.

“It is important to strengthen the institutional independence of the IEC by establishing an inclusive mechanism for the selection and appointment of the IEC Chairperson and Commissioners; by ensuring the security of the IEC Commissioners’ tenure, and by providing the IEC with full sovereignty over its budget,” said Mr. Poche. He noted, this time the IEC’s commitment to democracy delivered credible elections, yet to strengthen the integrity of results, it would be desirable to establish clear and coherent procedures for polling, counting, results transfer, and collation. “Fulfilment of this as well as of many other recommendations will require cooperation between various electoral stakeholders as well as an inclusive dialogue with civil society,” stressed the Chief Observer.

In its Final Report, the mission underlines the importance of continuous and extensive voter and civic education, as well as urging the establishment of an accurate voter register and the provision of timely opportunities for voter registration. The EU EOM also calls for the review of boundary delimitation provisions, advocates an enactment of detailed complaints procedures. It also considers, that an effective monitoring and reporting system for campaign finance throughout the campaign would help to level the playing field for contestants and would enable voters to form an accurate picture of candidates’ financial standing, essential to make an informed choice on election day. Further recommendations include legal measures to ensure the overall respect for freedom of expression and the genuine independence of the state broadcaster.

To promote women’s full enjoyment of equal rights, the EU EOM recommends the introduction of legal requirements for political parties to apply affirmative action gender policies. The mission also suggests that measures should be taken to respect the voting rights of persons with disabilities and to enhance their full participation in political life.

The EU EOM has identified the following 11 priority recommendations: