The EU is a globally recognised and credible actor in international election observation. Since 2000, the EU has deployed over 200 Election Observation Missions (EOMs) in more than 75 countries.

The support to democracy worldwide is not just consistent with the European Union’s fundamental principles: it is our clear interest, and a crucial tool for our foreign policy. Only a functioning democracy can address its citizen’s needs, meet their demands and fulfil their aspirations. EU Election Observation Missions enhance our engagement with partner countries, including in support of their efforts to fulfil their international human rights obligations.

Electoral observation is not just the task of one day and the quality of the electoral process has to be continuously reassessed and improved. A democratic election is incomplete without a level playing field, fair competition between candidates, freedom of expression, of assembly and association, the respect for human rights and a neutral and independent election management body. A vibrant civil society and diverse media landscape are also essential pre-requisites.

The European Union deploys EOMs to countries all around the world, with the exception of the regions covered by the Organization for Security and Co-Operation in Europe (OSCE). In the EU Member States, election processes are observed by the OSCE.

Why election observation is important?

An effective democratic system needs regular, inclusive, transparent and credible elections. This is why the Election Observation Missions (EOMs) and the election assistance programmes are a fundamental part of European Union’s action to promote democracies, human rights and civil society participation worldwide. The EOMs are the concrete manifestation of EU's commitment in this respect. The images of voters getting out of the polls – their forefingers marked with dark ink – have generated great hopes in many countries around the world.

The immediate goals of Election Observation Missions are to:

The long-term objectives aim to:

Strong democratic institutions are vital to improve a country’s resilience: they can help prevent the next crisis, stabilise a war-torn area or defuse tensions before they erupt into armed conflict.

How does the EU observe elections?

Through the years, the EU has built up a strong legacy as a reliable partner for democratic consolidation.

Election Observation Missions (EOMs) provide a comprehensive, independent and impartial assessment of an electoral process according to international and regional standards for democratic elections.

An EOM assesses all aspects of the electoral process, including:

EOMs follow a long-term observation methodology, with Core Team experts and long-term observers arriving in the country several weeks before the Election Day and staying on in the country to follow counting and tabulation. On Election Day observers visit polling stations to assess the opening, voting, counting and aggregation of results. The observation is conducted according to the principles of independence, full coverage, impartiality, transparency, professionalism and non-interference in the process.

In its final report, the EOM offers recommendations to improve the integrity and effectiveness of future electoral processes and the wider process of democratisation.

EOM’s recommendations focus on a wide range of issues. From human rights, democratic institutions, freedom of the media to active and engaged Civil Society Organisations and an independent judiciary system to mention just a few.

On the long term, The European External Action Service, the Council, the European Commission and Member States systematically follow-up on the implementation of the recommendations made by EOMs, as well as of other reputable election observation groups, such as OSCE/ODIHR. The follow-up to EOM recommendations is an integral part of EU’s political dialogue with partner countries and informs governance and electoral assistance projects. The EU is a leading global actor in providing electoral assistance. EU election support constitutes a significant contribution to the promotion of governance and development objectives.

More information on election assistance is available on the INTPA Website.

The Chief Observer , a member of the European Parliament, has the overall responsibility for the mission, including of the Preliminary Statement and of the Final Report and is present in the country at key moments of the mission.

Core Team experts together with the Deputy Chief Observer support the Chief Observer in setting the analytical framework for the mission. To this end, they carry out specific tasks such as the analysis of the electoral, legal and political aspects, the monitoring of the online and offline media and the management of the observers’ work. Core Team experts are specialised, among others, in legal issues, election administration, human rights and gender security, logistics, media and social media monitoring. They have professional experience in election observation and are recruited via specific calls for applications.

Long-term observers (LTOs) are generally deployed throughout the host country around one month before the Election Day. They observe the unfolding electoral campaign, the conduct of the Election Day and the post-election operations. They also address particular issues, such as the use of public resources by candidates during campaigning as well as wider human rights issues such as freedom of assembly, freedom of speech and the participation of women and vulnerable groups in the electoral process. After Election Day, LTOs remain on the field to observe the resolution of electoral disputes.

Short-term observers (STOs) are deployed to observe the polling day and the early counting of ballots. Both LTOs and STOs are deployed in teams of two and their work is closely interlinked.  Long-term observers report regularly on their observations and prepare the STOs work in their area.

The observers are proposed by EU Member States, plus Canada, Norway and Switzerland, with whom the EU has signed bilateral arrangements for observers from these countries to participate in EU election observation missions.

To fulfil its mandate, the day-to-day management of the mission involves complex logistical and security support. For this, the EU hires supporting staff such as project managers, security officers, drivers, translators, IT professionals, through a service provider.

EU Election Observation Missions (EOMs) are only deployed upon invitation from the country where the election takes place. Following consultations with Member States and the European Parliament, the High Representative/Vice President decides on the annual priorities for the European Union’s electoral observation work.

The strength and added-value of EU election observation missions lie in their robust and comprehensive methodology, which is the warrant of their credibility. EOMs assess the electoral process on the basis of international, regional and national election standards. This methodology is uniformly applied to all the electoral processes observed by the EU.

The fundamental principles of independence, impartiality, consistency, long-term approach and professionalism are set out in the 2000 communication from the European Commission on EU election assistance and observation. They cover all phases of the election cycle: pre-election, election day, and immediate post-election. EOMs do not interfere in the organisation of the election itself. Instead, they collect and analyse factual information and provide an independent public assessment of the electoral process.

In 2005 we endorsed, under the auspices of the United Nations, the Declaration of Principles for International Election Observation (DoP). Since then an ever-growing number of international and regional observer groups have joined in endorsing this document, which has become the golden standard for credible and professional international election observation.

International Election Observers, including EU Observers, share key aspects of observation methodology contained in the DoP.  The DoP is currently endorsed by more than 55 organisations across the globe. Engaged from the outset in the elaboration of these principles, the EU has recommitted to the Declaration of Principles with the adoption in July 2015 of its second EU Action Plan for Human Rights and Democracy.

The EOM is generally deployed in the designated country between 8 to 6 weeks prior to Election Day, starting with the Service Provider and the Core Team experts’ arrival. Long-term observers arrive to assess the preparations for the election at the regional/ local level around 5 to 4 weeks before the voting day. Short-term observers arrive shortly before election day to increase the observation capacities of the mission during polling, counting and the tabulation of results.

Regular meetings are held with election officials at national, regional and local levels, political parties, candidates, civil society and media throughout the country.

Observers clearly distinguish between complaints, rumours, accusations and verified facts. Only facts that are witnessed or verified by the observers will be used as the basis of the mission's report. While the mission cooperates with other observer organisations, only information collected by its own international observers is used for the mission's statement and final report.

The assessment of an election is based on the relevant international and regional standards that the country has signed up to, as well as on the national legislation, covering a number of key areas, such as:

Each of the areas is assessed by the EOM analysts who consider all components of the election process with the support of both long and short-term observers. This enables them to conduct a thorough and comprehensive assessment of the overall administration of the elections as well as the degree of freedom and access granted to candidates, voters and the media.

A Preliminary Statement is then presented by the Chief Observer at a press conference usually 48 hrs after election day. This statement is based on the observation of the entire process up to the voting.

The Final Report contains the EOM's assessment on the whole electoral process and recommendations for the improvement of future electoral processes. It is delivered to national authorities and stakeholders and made public during the Return Visit of the Chief Observer around two months after the EOM leaves the country.

Based on invitations received from countries, the HRVP decides on the missions to be deployed, after consultation with Member States and the European Parliament.

Selection of the Chief Observer, Core Team Experts and Observers

After deciding to deploy a mission, the HRVP appoints a Chief Observer, a Member of the European Parliament (MEP). The experts of the EOM Core Team are selected, based on their experience, from a pool of experts that the European Commission has compiled following a call for interest published on its website.

Long and short –term observers are appointed by the European Commission and the EEAS from a selection of candidates proposed by EU Member States. The European Parliament may also decide to send a delegation of MEPs to observe the elections. The parliamentary delegation is integrated into the EOM. Working closely with the Chief Observer, it endorses the EOM findings and conclusions.

Want to become an observer?

Here you can find information on how to join an EU Election Observation Mission, including the criteria for recruitment and training requirements.

Each EU Member State has a Focal Point for matters related to election observation. They are part of their national Ministry of Foreign Affairs or of a related external agency.  Focal Points are responsible for the recruitment and proposal of their own country’s candidates for selection as Short and Long-Term Observers to EU Election Observation Missions.

Norway, Switzerland and Canada have bilateral arrangements with the EU to send observers to EOMs and therefore they also have Focal Points for election observation.

The European Union Database on Election Missions provides public access to a central repository of the recommendations issued by EOMs since 2016. Recommendations can be searched, by year, region/country, type of mission, type of election and type of recommendation. Final reports of EOMs, preliminary statements and press releases since 2000 as well as reports of EU Election Follow-up Missions can also be found in this database.

Election observation is a concrete example of EU’s commitment to supporting democracy and promoting human rights around the world. To this end, the Election Observation and Democracy Support (EODS) III Project, funded by the European Commission, is dedicated to strengthening EOMs capacity in five key areas:

Follow the Official Facebook page of the European Union Election Observation Missions to access the central hub for all communication on EOMs deployed on the ground and the Official EU EOMs YouTube channel  where you can see videos from different missions around the world. 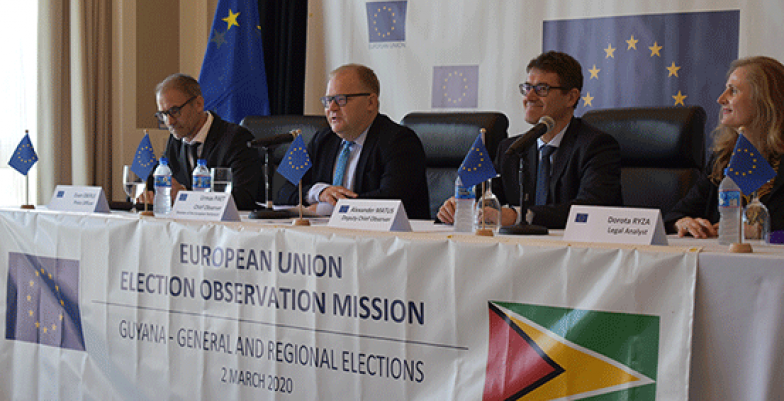 Competitive and well-organised elections in a difficult legal environment, without transparency of political finance 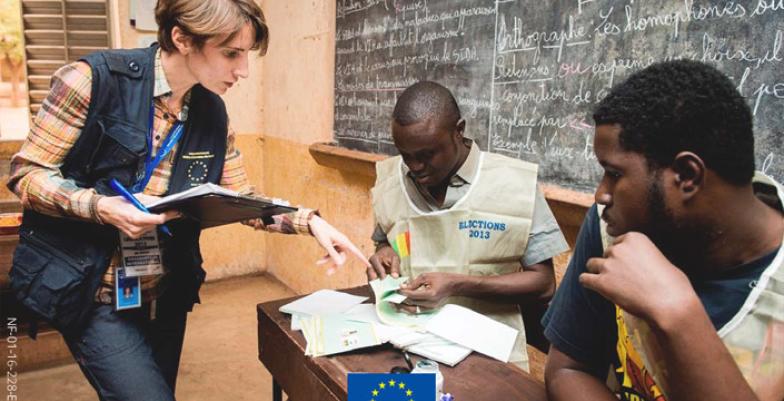