HR/VP Josep Borrell in the Western Balkans: Your future is our future 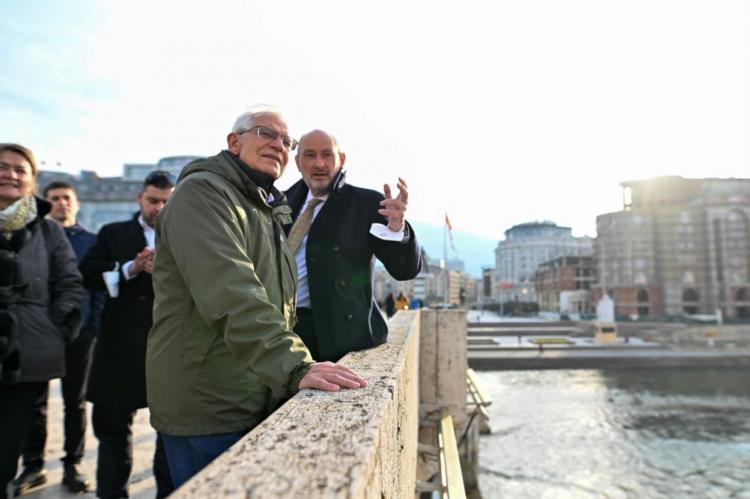 The visit came against the backdrop of the barbaric aggression by Russia against Ukraine. In the three countries, the HRVP discussed the current war with his interlocutors. They all condemned the Kremlin’s aggression. In these testing times they have sided with the EU and the international community to stop the war, assist the Ukrainian people and work for peace and international law, demonstrating that their place is in the EU family.

As the High Representative wrote on his blog Time to move forward on EU integration in the Western Balkans:

“We are united in our efforts to stop the war and help the Ukrainian people. I underlined firmly the EU’s commitment to support the Western Balkans even more and to take forward the region’s future in the European Union.”

Albania and North Macedonia: it is time to start the EU accession talks

The High Representative started his visit in Skopje, North Macedonia, where he met among others President Pendarovski and Prime Minister Kovačevski. The country today is 100% aligned with the EU Common Foreign and Security Policy (CFSP) and is contributing to EU CSDP missions and operations. The High Representative praised President Pendarovski for engaging in countering disinformation and information manipulation, partnering with and opening space for civil society in the country. The HRVP welcomed the new impetus between Sofia and Skopje for a mutually acceptable solution.

In Albania, High Representative Borrell met with political authorities including Prime Minister Rama and Foreign Minister Xhaçka. Albania was already aligned 100% with the European Union Common Foreign and Security Policy before the war and as the High Representative said: “in these testing times, Albania has re-confirmed its engagement and commitment to the international security“. The High Representative thanked Albania for its work globally in the international arena. As a member of the United Nations Security Council, Albania was one of the penholders of the United Nations Security Council resolution and co-sponsored the United Nations General Assembly resolution against the Russian aggression, which resulted in a strong condemnation and isolation of Russia by the international community.

Bosnia and Herzegovina: the EU is committed to peace, safety and stability

The High Representative visited the EU Operation EUFOR Althea, received by COMEUFOR Major General Anton General Wessely. Josep Borrell emphasised the importance of EUFOR to support the country’s authorities in maintaining a safe and secure environment and added: “We have almost doubled our presence on the ground, with four additional companies and there are further assets offered by EU Member States to strengthen our capabilities even more. In these tense moments, I want to reassure the people of Bosnia and Herzegovina of our unwavering commitment to maintain safety and stability, and at the same time reinforce our ability to react swiftly in case of crisis. This reflects the EU’s commitment to the unity, territorial integrity and sovereignty of Bosnia and Herzegovina“.

The High Representative met with elected leaders of Bosnia and Herzegovina and communicated that they need to deal with significant political challenges to progress on the European path. The High Representative called on all elected parliamentarians and authorities to work together to find solutions in the best interest of all people of Bosnia and Herzegovina. Republika Srpska’s authorities need to return to constructive decision-making within BiH institutions.

The High Representative addressed people’s concerns on economy and growing prices of energy and food.

As the HRVP said: “Via the Economic and Investment Plan, the European Union is mobilising unprecedented resources to support diversification of energy supply, reducing dependence, strengthening regional cooperation, building infrastructures, and creating jobs.”

The HRVP also added that the EU is working on how to better integrate and involve the region more in EU initiatives to address the economic impact of this war, to face future shocks, allow economic recovery and clear the way to the European Union.

Extracts from the interview with N1, Sarajevo, Bosnia and Herzegovina, 16 March 2022.

Meeting civil society: your future is our future

Josep Borrell met with representatives of civil society organisations from the three countries including women peacebuilders in Sarajevo and journalists, fact-checkers, researchers and academics in Tirana.

In Skopje, the HRVP met with youth and civil society representatives who over the past year, together with colleagues from the whole region, have contributed to the Conference on the Future of Europe. Participants provided the High Representative a handover of their work giving practical ideas on democracy, rule of law and green growth. They demonstrated the commitment of the people of the Western Balkans to build a peaceful, prosperous and united common continent.

As the High Representative said: “The Western Balkans are an integral part of the future of Europe. Your future is our future.”