HR/VP Blog - Last week, I travelled to Chile, making my second visit to Latin America during my mandate. Chile is an important partner of the EU and we are about to finalise the modernisation of our 2002 Association Agreement, the oldest one in the region. 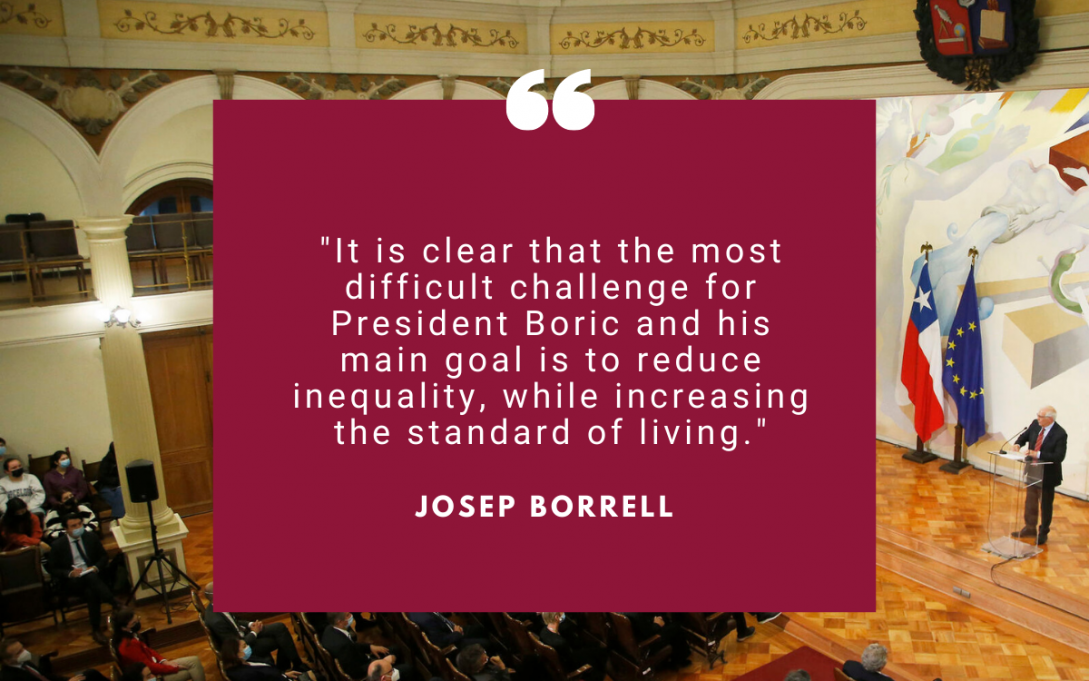 It was the right time for me to visit Chile. The country experienced a violent and long "estallido social" (social outbreak) that started in October 2019 and which resulted in a Constituent Convention that will culminate in a referendum on a new Constitution to substitute the one inherited from the times of Pinochet. And Chile has also just elected a new left-wing government, which is a trend in current Latin American politics and which will also have an important international impact.

The war in Ukraine prevented me from attending the inauguration of the new President, Gabriel Boric, on 11 March. His victory in December 2021, with 56% of the vote, was followed by an exemplary transition of power with the former President Piñera and with the losing candidate conceding as soon as the result became clear, even before the counting had finished.

“Expectations are high and the new government is facing demands for more equality and a fairer distribution of incomes, which had provoked the social implosion and brought them to power.”

These were some of the issues that we discussed when I met with President Boric and several of his ministers. Most of them mentioned that they have been in power for just a month and a half, but that it already felt as a year and a half. Indeed, expectations are very high and the new government is facing high social demands for more equality and a fairer distribution of incomes, which had provoked the social implosion and brought them to power.

Now, the shockwaves of the Ukrainian war are causing inflationary pressures and supply chain disruptions that are dramatically lowering growth projections around the world. Chile is no exception: inflation has reached 9% and projected GDP growth for 2022 has been lowered to 1.5%. The EU will need to pay more attention to help the whole region, which has already suffered a heavy toll during the Covid pandemic, and is crucial to avoid a new “lost decade”.

Chile is evidence good example of the fact that a sound macroeconomic performance does not necessarily reduce inequality. Just a few days before the start of the “estallido social”, former President Piñera portrayed Chile as an “oasis” of political stability in the region.

It is true that in the first decade of this century, tens of millions of Latin Americans left poverty behind. However, when the economic boom, driven by high prices of raw materials, stalled, it was difficult to keep the gains achieved. Certainly, the dramatic events in Chile captured the attention around the world. But Colombia, Ecuador, Perú and other countries also experienced bouts of social unrest. And we should not forget that Europe too had similar problems, as demonstrated by the “gillet jaunes” in France. We are experiencing a major transformation of the political landscape driven by growing inequality and the resulting feeling of unfairness.

“We are experiencing a major transformation of the political landscape driven by growing inequality and the resulting feeling of unfairness.”

But there are few places where social protest has generated political change as remarkably as in Chile. Just after his reference to the “Chilean oasis”, President Piñera apologised for his "lack of vision" and raised the minimum wage and the lowest pensions by 20%. The political parties reached an agreement to write a new Constitution. In October 2020, in a referendum with a 51% turnout, 78% of Chileans supported the initiation of a Constituent Convention. In May 2021, in a election with a 41% turnout, the Constituent Assembly was formed where left-wing candidates won about three-quarters of the seats and two-thirds of all deputies were independent. And in November of 2021, regular national elections elected a Parliament with an approximate 50/50 split between left and right parties.

As a consequence, Chile now has a Constituent Assembly with a clear left-wing majority and a Parliament where the new left-wing government does not have a guaranteed majority in any of the two chambers. However, it has found no opposition from business leaders to a significant raise of the minimum wage and it is preparing a tax reform aimed at increasing the dismal amount of public spending that is now just 20% of GDP.

“Chile and the EU share common values that need to be defended.”

In our meeting, I agreed with President Boric' assertions that Chile and the EU share common values that need to be defended. Our joint commitment to democracy, a division of powers, human rights and (scientific) progress make us like-minded partners. The EU welcomes that Chile is not only part of the majority of the countries in the world that have condemned Russia's aggression of Ukraine, but we also appreciate the clarity with which it has done so. We also agreed that Venezuela has to hold elections that are recognised as free and fair by the world community.

We also discussed how to best finalise the modernisation of the Association Agreement of 2002, which goes well beyond being a mere trade agreement. It is the first of the EU's "new generation agreements" and covers a broad agenda of collaboration in areas such as diplomacy, security, human rights, democracy, gender equality and energy. I hope it can be signed before the end of this year, coinciding with the 20th anniversary of the original.

“The modernisation of the Association Agreement of 2002 is the first of the EU's ‘new generation agreements’."

In President Boric, who is 36 years old, I perceived a similar willingness to be transformational as in the first government of Felipe González in 1982 in Spain. President Boric told me about his commitment to produce long-term structural change, to reduce inequality by reducing the subsidiary role that the state has had in the last decades and that is embedded in the current Constitution. The EU has been observing the Constitutional Convention with great interest and acknowledges the effort to involve the whole people of Chile. I hope, as President Boric said, that the new Constitution becomes the "punto de encuentro" (meeting point) for the whole country. Several times during my visit, I remarked that Constitutions are a kind of playing field for the political actors that need a broad social consensus to last.

We were honoured to have Minister of Foreign Relations, Antonia Urrejola at the opening of the EU's new Delegation in Chile. We discussed the potential geopolitical implications of the aforementioned regional shift towards the left, particularly in Central America. Also, based on her extensive experience in the matter, she gave me an eloquent explanation of the need to give political recognition to indigenous people. I also had the opportunity to thank the Minister of Defence, Maya Fernández Allende, for the participation of members of Chile's armed forces in EU missions around the world. Indeed, in a recent trip to Sarajevo I was briefed by a Chilean officer.

“Chile is hosting an important and increasing number of Venezuelan and Haitian migrants.”

With the Minister of Interior, Izkia Siches, we discussed challenges and best practices of control and integration of migrants in search of a better future, since Chile is hosting an important and increasing number of Venezuelan and Haitian migrants. We also discussed best practices in police models. With the General Minister of the Presidency, Giorgio Jackson, I had a frank exchange on how to combine measures such as raising the minimum wage, increasing protection for the self-employed, and a progressive and green tax reform in the context of increasing interest rates.

I also met with the President and the Vice-President of the Convención Constitucional, María Elisa Quinteros and Gaspar Domínguez, whose work is reaching the final stages. On 4 July, they will present the proposal of the new Constitution, which will be voted on in a referendum on 4 September. There are several issues receiving a significant amount of media and social attention where different positions are still being debated ahead of the final compromise.

In a meeting organized by the Comisión Económica para América Latina y el Caribe (CEPAL), I reflected on Chile's great renewable energy potential, and announced four EU-Chile joint initiatives to develop green hydrogen projects, to address climate change and a digital alliance to share data from the Copernicus system. The Minister of Environment Maisa Rojas explained the plans to make the country's decarbonisation commitments binding and to make them a reality with specific plans across all the regions. I also met with companies with pilot projects of green hydrogen in the country.

At the Universidad de Chile, I had the opportunity to meet with students to debate the need of all societies to make progress on the green and digital transitions, ensuring equality and social cohesion. Rector Ennio Vivaldi argued that Chile needs to eliminate the subsidiary role of the state in the provision of public services and develop high-quality public education.

“President Boric said in his victory speech that he is standing on the shoulders of giants. Indeed.”

I also had the honour of having been hosted at the Palacio de la Moneda by four Presidents of Chile. After our meeting, president Boric accompanied me, once more, through the rooms and corridors of the Palacio de la Moneda that are full with history and where the memory of president Allende is present. President Boric said in his victory speech that he is standing on the shoulders of giants. Indeed. And it was very clear to me that he will do everything within his reach to honour them.

It is clear that both his most difficult challenge and his main goal is to reduce inequality, while increasing the standard of living. Chile's Gini's coefficient , which measures inequality, is slightly below Latin America' average. But Latin America's average is significantly higher than that of any region in the world. In this sense, Chile's main goal is also Latin America's. A serious project of regional integration, as the one that the European Union represents, could be of great help. This is another reason to strengthen our cooperation.