#FieldVision | A Lighthouse in the Desert: The Mobile Border Units in Niger

Providing security along 5,700 kilometers of border is a daunting task in a country with only 55,000 defence and security forces. It is in this context that EUCAP Sahel Niger’s Mobile Border Units are helping Niger to respond more decisively and flexibly to security threats. 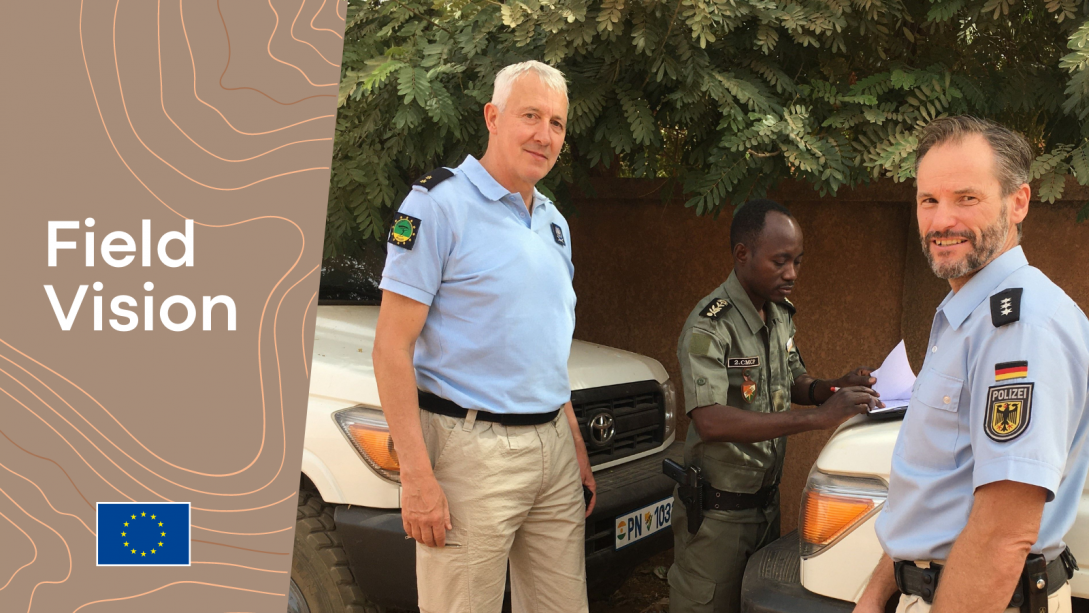 Niger is the second largest country in West Africa and the sixth largest country on the African continent, with a surface area of 1,267,000 km². That is about twice the size of France. Like all countries in the Sahel, it is affected by three major security threats: terrorism, transnational organised crime and irregular migration. In a country that borders seven states along 5,700 kilometers and has only about 55,000 defence and security forces, creating a safe and secure environment is a key challenge.

Since 2012, EUCAP Sahel Niger, a civilian EU mission under the Common Security and Defence Policy, has supported Nigerien authorities to improve the security situation by providing targeted training, equipment and strategic advice to the Nigerien security forces. While the focus at the beginning of the mission was on individual projects that addressed the most urgent needs, the work of the mission has changed and the mission now has a more holistic approach.

A new approach: The concept of mobile forces

A holistic approach is not just the bringing together of all the individual measures; it is the development of a concept that responds to the new challenges with appropriate means. So in 2019, a new project was added to EUCAP’s mandate: the Mobile Border Control Unit, now a flagship project of the EU mission. It is part of the new "mobile forces concept" which will allow Niger to respond more decisively and flexibly to security threats.

’It couldn't be more necessary to provide more security in Niger’, says Alexander Braker, a mission member from the Netherlands who arrived in the West African country in 2019 as a Border Management Adviser. ’Within EUCAP Sahel Niger, I am tasked with coordinating the Mobile Border Control Unit project and with advising the Head of Operations. The four pillars of the project are training, equipment provision, the establishment of barracks and trust-building’, says Alexander. Together with several colleagues from France and Germany, he is responsible for the Mobile Border Control Unit project.

A significant achievement of this unit of the mission thus far is the operationalisation of the second Mobile Border Control Unit in May last year in the southern Nigerien town of Birni N'Konni on the border with Nigeria. The creation of a third unit to be deployed in the sensitive area bordering Burkina Faso and Mali has just begun.

Mobile, powerful and close to the people

CMCF (acronym in French) is a mobile unit of the Nigerien National Police consisting of 250 men and women. Specially equipped and trained, they are responsible for strengthening border security at sensitive points in the vast country of Niger. The first two mobile units are permanently stationed at the hotspots of Maradi and Birni N'Konni.

While the first CMCF in Maradi was created with US funds, the second unit at Birni N’Konni, which was supported from the beginning by EUCAP, is a ten million euro project funded by Germany and the Netherlands over three years. Thanks to their equipment and composition, the mobile forces are also able to travel around the region for longer periods of time and are thus more visible to the Nigerien population, which has long suffered from transnational organised crime and attacks by armed gangs.

‘Within our CMCF team, we regularly speak with the commander of the mobile force. His positive attitude certainly gives hope and great progress has been made in the trust-building activities of the CMCF of Birni N’Konni with the local population’, explains Alexander. And it is precisely this presence that ultimately creates trust between the Nigerien security forces and the population and that is why the European Union, through EUCAP Sahel, is providing sustained support for this project.

Good planning is the key

But the actual work on the ground is only one side of the coin. Management of the project is almost more important. ’The management of the Nigerien police and the Head of Operations of EUCAP Sahel Niger meet regularly to discuss the Mobile Border Control Unit, including logistics, training, human resources, trust-building and transmissions. This is supported and implemented at the technical level through meetings between local police and EUCAP experts’, highlights Alexander.

Together with his French colleague, Alexander keeps track of the state of affairs on a daily basis, maintaining contact with EUCAP experts within the various working groups and with local and international partners. ‘The donor countries receive an annual overview of plans and the funding required for their realisation. We also regularly inform the donor countries about the state of affairs. We now have a good overview of the needs of a mobile unit of approximately 250 members. The blueprint, which has been backed from the beginning by EUCAP Sahel Niger, and is continuously refined, can now easily be used for potential future mobile units.’

It is support from EU member states that makes the Mobile Border Control Unit project possible. ‘But it is not always easy to find a common planning language with the local partners’, adds Alexander. ’I notice clear differences in the approach. I feel that the people here in Niger live more in the here and now and our approach is more for the longer term. What is the plan for next year or for the coming years? What exactly is needed in terms of material, spare parts or training or how much fuel is needed on an annual basis? These are all questions that need to be answered again and again.  It also remains a challenge to ensure registration, proper storage and maintenance of equipment.’

The EU's ambition is to provide long-term planning so that the Nigerien forces can improve the country's security themselves in the long run. ’I am learning every day from the project.’ adds Alexander: ’I understand that my European view is not always applicable. Overall, the concept of well-trained and equipped mobile teams that operate increasingly better, due to our advice, is an enormous gain for security in the region.‘

Successes in the fight against banditry and crime, such as the liberation of kidnappes in the border region with Niger, show the enormous advantages of mobile units. Therefore, Niger now wants to equip each of the three internal security forces - police, national guard and gendarmerie - with a number of such special units in each. In future, these units will not only be constantly on the move in their own area, but should also be able to carry out operations in the country together, if necessary.

Alexander is convinced that developing concepts and then implementing them with the Nigerien partners ultimately changes one's own personal perspective. ’Working on this concept gives great satisfaction. Together we know that we are on the right track and we try to learn from each other, even if this requires us to adopt a different mindset.’

Alexander Braker (60) worked for the Royal Netherlands Marechaussee. Currently, he is seconded by the Dutch Ministry of Foreign Affairs to EUCAP Sahel Niger.