HR/VP Blog - After Chile, I visited Panama last week to attend the first ever joint SICA[1]-CARICOM[2] meeting with the EU. Both organizations bring together 21 member countries in Central America and the Caribbean. The message from the region was loud and clear: the EU needs to be more present. 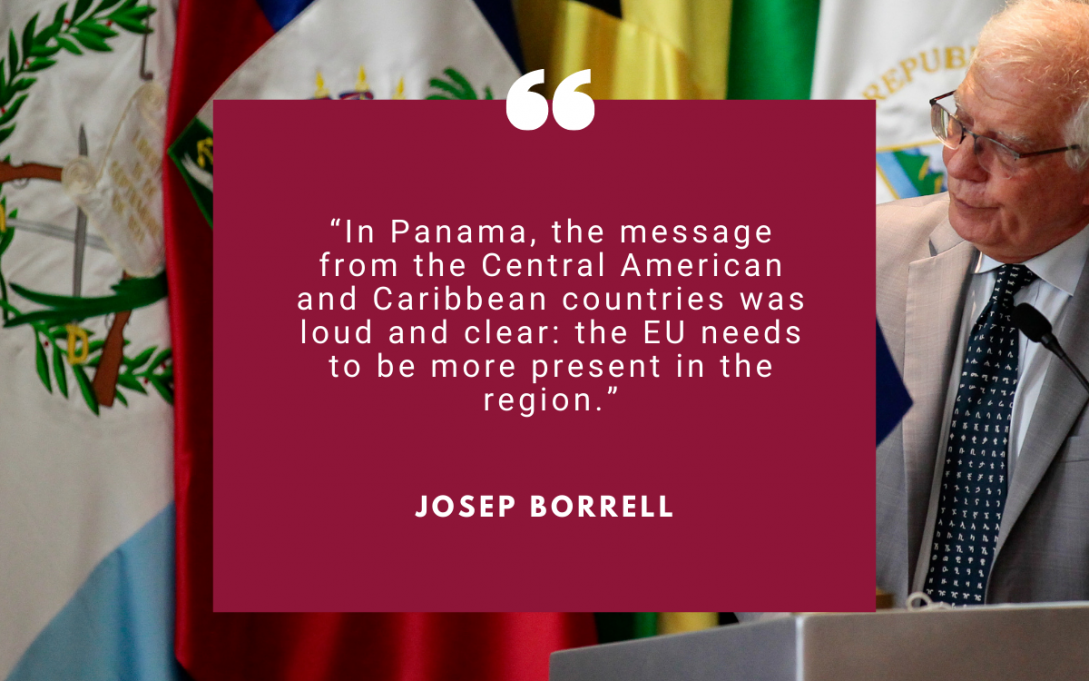 Rather than complaining about Europe´s loss of influence in the world, the EU needs indeed to engage proactively, listen to our partners and forge alliances with like-minded partners.

The shockwaves of Putin’s war

Throughout my talks with the Foreign Ministers of the region, I heard a strong condemnation of the Russian aggression against Ukraine. Only Nicaragua, which chose not to attend the meeting, and El Salvador have deviated from this regional consensus. The shockwaves of Putin’s war in terms of sharply increasing prices for food, energy and other commodities are being felt strongly in Central America and the Caribbean, affecting lower income countries the most. Unlike many European countries, our partners simply do not have the fiscal margin to cushion the impact of the economic crisis on their citizens.

They know this is a man-made crisis, and we know that man’s name: Vladimir Putin. Russia has a vested interest in keeping energy prices at record levels, benefitting some producer countries in the short term but harming the recovery prospects of many more. According to the Comisión Económica para América Latina y el Caribe (CEPAL), the COVID-19 pandemic had already increased by 30% the number of people suffering from hunger in the region. As a result, 40% of the population experienced in 2020 food insecurity with the largest increase of any area in the world. The region is calling upon the EU to contribute to the global response to these shocks and to assist our partners.

“The region is calling upon the EU to contribute to the global response to the shocks created by the COVID-19 pandemic and the war against Ukraine and to assist our partners.”

Besides explaining that the sanctions are not causing the inflationary effects and supply chain disruptions, we must contribute decisively to mitigate the impact now. We cannot wave a magic wand and make the global market disruption caused by Russian aggression simply disappear but the EU and its member states are working bilaterally and multilaterally with international organizations and the Global Crisis Response Group led by the UN. The EU is reviewing its toolbox with a focus on the most at-risk regions and lower income countries. This crisis requires an integrated humanitarian, development and macroeconomic response.

Strengthening our partnership with the Caribbean

Engaging with the Caribbean was one of the top priorities for my visit. The EU and the Caribbean countries are bound by strong historical and economic ties, but we should not neglect the political relationship. We are united by our commitment to democracy human rights, and multilateralism. The Caribbean Community (CARICOM) and individual Caribbean countries have been clear-eyed in condemning the unprovoked Russian invasion of Ukraine. “CARICOM welcomes a Europe that champions multilateralism and a rules-based global order through a more active role and stronger voice for all our countries,” said CARICOM Secretary General Dr Carla Barnett in the meeting. It has been too long since high-level engagement between the EU and the Caribbean took place. We have much to gain by working together.

Beyond the immediate consequences of the Russian aggression, we also discussed in Panama a future-oriented agenda. For the past 45 years, the relationship has been framed by a donor-beneficiary logic. Now it is time to lift our relationship to a partnership of political equals. The Caribbean feels that the Economic Partnership Agreement between the EU and CARIFORUM has not delivered on its promises. The region demands that the new “post-Cotonou” Agreement between the EU and the Organisation of African, Caribbean and Pacific States and the associated Caribbean Protocol responds to the specific constraints that limit possibilities to diversify their economies.

The EU is acutely aware in particular of the specific vulnerabilities of Small Island Developing States (SIDS) and the low-lying coastal areas in the Caribbean regarding climate change. This is not an abstract or potential problem. People in the region already experience its devastating effects on their daily lives: more frequent and heavier tropical storms and hurricanes, droughts, rising sea levels and destruction of marine habitats. The European Union is fighting climate change at home with our ambitious Fit for 55 agenda but we also try to put our money where our mouth is. We are the largest contributors to the UN Adaptation Fund, and are stepping up our efforts to mobilise further climate finance. This fight is a priority in our cooperation programmes with the Caribbean.

“Partnership means also being able to address areas where we have differences. We engaged in a frank discussion about irritants such as anti-money laundering regulations and tax governance.”

Partnership means also being able to address areas where we have differences. We engaged in a frank discussion about irritants such as anti-money laundering regulations and tax governance. Most of our partners are working hard to comply with existing requirements, but implementation of new regulations is key. Having listened to CARICOM partners, I am also convinced that we must pay closer attention to the consequences of the EU non-cooperative jurisdictions listings for the average citizen.

The difficult – but necessary - path of Central American integration

Central American integration has made progress and it remains the most integrated region in Latin America, but the isthmus faces a turbulent period. Nicaragua‘s terrible autocratic spiral threatens regional cooperation. We must work together to help the Nicaraguan people. The appointment of a new SICA Secretary General is blocked and only the countries of the region can solve this problem but we must also do our homework. The EU’s Association Agreement with Central America was signed 10 years ago but it has not been ratified. There is still one member state missing, Belgium, to finalize the ratification. This means that the trade pillar has been in provisional application for a decade but the political and cooperation part is not.

In some Central American countries, homicide rate are among the highest in the world and are invariably linked to organized crime and drug trafficking, which affects the EU directly. Officials that I met reflected on the futility of fighting drug trafficking without a global strategy that also includes the countries of origin and destination. The price of a kilo of cocaine in a country of origin is around 2.000 euros, which increases to around 5.500 euros in the ports of Central America used to ship it to Europe, and jumps to 50.000 euros or more when it arrives in Europe. In addition to all the health and security problems caused by drug trafficking, the associated money laundering is a key factor to include certain countries of the region in the EU list of high-risk jurisdictions. Migration was another issue of concern. Many countries in the region are part of the routes used by migrants to reach the United States. Last year alone, 133.000 migrants crossed Panamá to reach the Mexican border with the US.

Beside all these challenges, there are also positive signs. In my meeting with the Alliance for Development in Democracy, put together in 2021 by the presidents of Panama, Costa Rica, and the Dominican Republic, I witnessed the commitment to work with the EU in the promotion of democratic values, human rights and economic growth.

In bilateral meetings, President Cortizo and Foreign Minister Mouynes reiterated Panama’s condemnation of Russia’s invasion of Ukraine and we addressed bilateral issues. Panama is a strategic aeronautic, logistical and economic hub, with growing European business interests and a great potential for cooperation. With EU companies operating in Panama, I learned about many projects ranging from the expansion of the subway system to new recycling and renewable energy plants. We also discussed the forthcoming establishment in Panama of a regional data centre for the EU’s Copernicus earth observation programme that will support Latin American and Caribbean countries in dealing with climate change and natural disasters. Accompanied by the European Investment Bank (EIB), we visited the Panama Canal, which routes 6% of world commerce. The EIB contributed with a loan of 500 million dollars to its expansion, which has reduced global CO2 emissions by 40 million tonnes since 2016.

The message from the region was loud and clear: the EU needs to be more present. Our Caribbean counterparts accepted my proposal to hold regular annual meetings at ministerial level. Beyond Central America and the Caribbean, there has not been also a bi-regional summit between the EU and Latin America and the Caribbean (LAC) since 2015. We want to develop a forward-looking and substantive agenda for EU-LAC relations in the coming months, in order to build momentum for a Summit in the second semester of 2023. To succeed, we must however proceed with finalizing pending agreements. Last time I spoke with the Mexican Minister of Foreign Affairs, he said: “call me when you are ready”. It is not only a question of mere geopolitical influence, but a matter of self-interest as well.