Uprisings in Iraq in late 2019 resulted in more than 600 protesters killed and over 20,000 wounded in the first six months. EUAM Iraq aims to share the tools, insights and experiences for the Iraqi forces to be able to make the right and just decisions in these critical situations and strike a delicate balance between safeguarding the rights to demonstrate, preventing and de-escalating violence, and protecting people and properties. 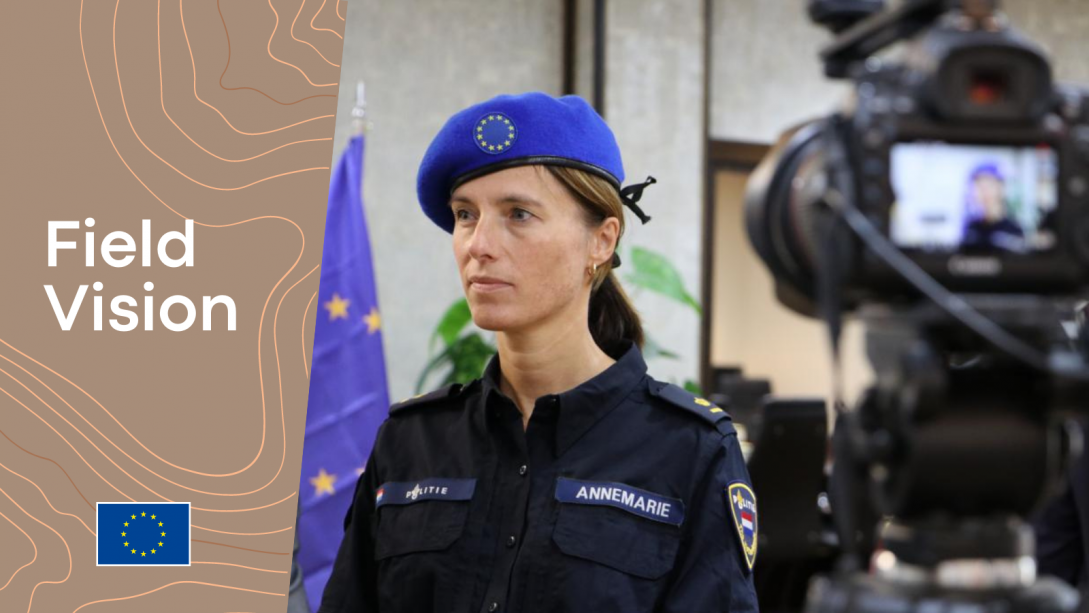 I am sitting behind my desk at home in the Netherlands as the EUAM Iraq interview committee appears on the computer screen. I have prepared myself well, but some difficult questions also come up. I am really interested in this position – to become an Adviser on Command, Control and Crisis Management - and some weeks later I am happy to hear that I have been selected for it.

For the last 20 years, I have been working as a police officer in the Netherlands and I am thankful for the things I have been able to do in my job. Nevertheless, there is still one thing on my wish list: working abroad. In the position of Senior Strategic Adviser on Command, Control and Crisis Management, I would be able to share all my experience and knowledge gathered during my career - for example on public order policing.

I come to learn later that advising on public order policing is a priority for EUAM Iraq following the uprisings in late 2019 all over Iraq. With thousands of demonstrators in different cities, the police shot at the crowds with live ammunition to get control of the situation, which resulted in more than 600 protesters killed and over 20,000 wounded in the first six months. By giving workshops, EUAM Iraq aims to share the tools, insights and experiences for the Iraqi forces to be able to make the right and just decisions in these critical situations and to be able to strike a delicate balance between safeguarding the rights to demonstrate, preventing and de-escalating violence, and protecting people and properties.

Jumping forward a few months, my mission is ready to kick off in May. It is a new experience and I have prepared myself as much as possible by doing background reading as well as talking to people. For the rest, I am off to Baghdad and I am making it happen!

In August I met with the commander of the Iraqi Law Enforcement Forces Command which is responsible for protecting protests and other social events throughout Baghdad. The unit consists of more than 4,000 officers, which is a big number compared to what we have in the Netherlands. I am speaking with a commander who really feels responsible for both his own people and the demonstrators. At the same time, I notice that protesting is a new phenomenon in Iraq and that the police has to learn how to deal with it.

In September, I am organising a workshop on Public Order Policing together with a colleague for a delegation of the Iraqi Ministry of Interior. Of course, to some extent, the local situation differs from the European one. But at the same time, we are all police officers in the end wanting to do our job as well as possible. That makes it really interesting to discuss the command structures and decision-making models together with our key strategic interlocutors.

After the event, I am interviewed by the Ministry of Interior’s TV channel. The journalist asks me some good questions, like how group behavior in demonstrations works. I am more than willing to answer this, based on my knowledge and experience and explain that it is necessary to make a distinction in a group - to select and focus on the troublemakers, since not everybody is playing the same role.

As Iraqis go to the polls on October 10, I join the Supreme Elections Operations Centre in Baghdad that is responsible for the coordination and supervision of election security. The day provides me with the opportunity to learn more about a military-led process and structure of crisis management regarding a sensitive nation-wide event. It is also different from how I am used to dealing with this kind of operations in the Netherlands, but I also understand that Iraq is a country with different decision-making styles. Whereas I am more familiar with consultative and delegative methods, here the approach is more authoritative. What also strikes me is being the only female in a room with more than fifty commanders.

My colleague, EUAM Iraq’s Adviser on Gender and Human Rights, asks me to join her workshop on Gender-Based Violence. She has broad experience in this field, but also wants a police officer to contribute to the process, which I am happy to do. In my home country, I have been working with risk assessments - an instrument used by senior police officers to assess the necessity of a temporary restraining order in case of domestic violence. As I am sharing the knowledge of this process with the audience, it makes me proud to be a police officer. It also makes me proud to be amongst local policewomen as, so far, I have only had the chance to work with policemen.

As the workshops on Policing Public Protests have proved successful, necessary and have been appreciated by the Ministry of Interior, by now they are held regularly both in Baghdad and Erbil, the capital of the Iraqi Region of Kurdistan.

In December, we are able to hold another dynamic workshop for senior officers of the Law Enforcement Forces Command, the unit with primary responsibility for policing protests in Baghdad city and the province. Amongst the topics covered during the course are international best practices and standards, human rights compliance, critical decision-making, command structures and gender balance. The subjects are also practically applied by the course participants in a series of public protest table-top exercises.

A couple of months later my time at the EUAM Iraq mission comes to an end. I am very grateful for the  colleagues I have met and the national partners I have been able to work with. It has been highly valuable for me to be able to pass on my experiences and be enriched as a policewoman and professional based on the cherished exchanges made in Iraq.

Annemarie van Berkel, is a senior police officer with more than 20 years of experience in the Netherlands police force with expertise in public order policing and crisis management as well as community policing, amongst other topics. She has just finished her mission to EUAM Iraq as a Senior Strategic Adviser on Command, Control and Crisis Management from the Netherlands Police. This is her account of her time at the mission.