HR/VP Blog - Two years after the stolen presidential election and the following brutal repression of opponents, I want to assure the people of Belarus that we will never stop to denounce the oppression in this country. We will stand with the people of Belarus as long as it takes to secure our common future in a safe, sovereign, democratic and prosperous Europe. 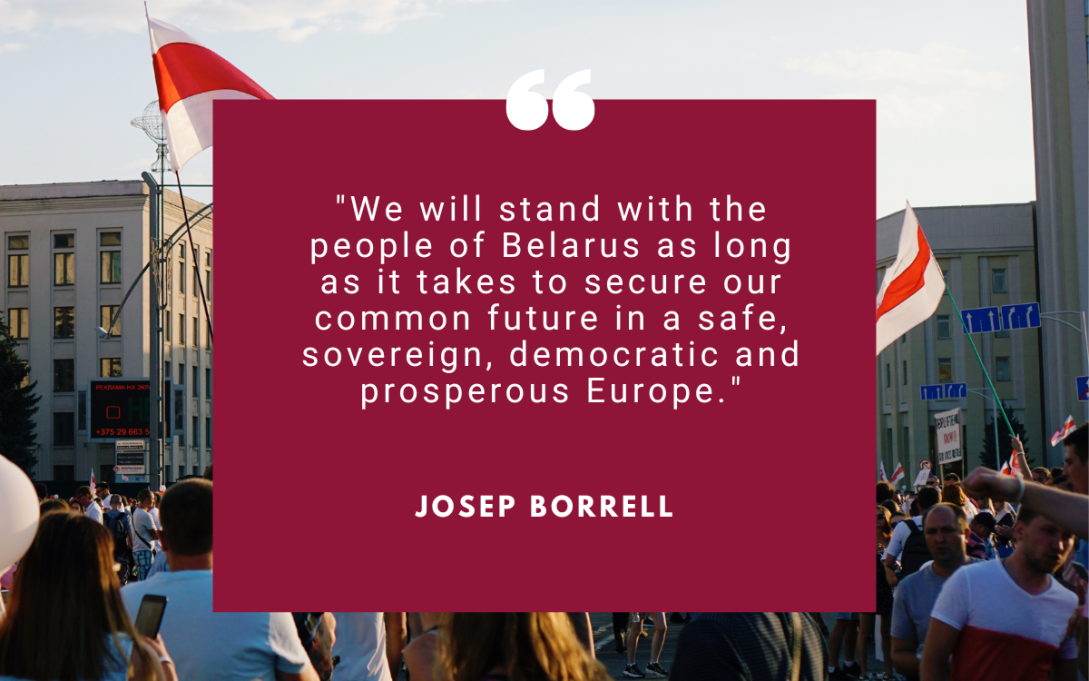 Two years ago, millions of Belarusians stood in long lines to cast their votes for the country’s president because they wanted change, they wanted Belarus to become a modern democratic country. But their voice was ignored and the elections rigged. Therefore, Belarusians took to the streets to protest. The regime in Minsk responded with all-encompassing lawlessness and brutality. It has decimated civil society, outlawed the media and persecuted thousands for protesting peacefully. Extensive disinformation and slander campaigns continue to accompany the brutality of Aleksandr Lukashenko’s regime against its own citizens.

The Lukashenko’s regime, accomplice of the Russian aggression against Ukraine

Last February, as Russia launched its military aggression against Ukraine, the Lukashenko’s regime became an accomplice in this aggression by letting Belarusian territory become a launchpad for Russian missiles and by granting Moscow full political and logistical support. Thousands of Belarusians are now being intimidated and persecuted by the regime for standing up against the war.

There are nearly 1300 political prisoners today, of which twenty-nine media workers, and there are even more people detained in reality for political reasons. The regime has labelled many democracy activists as “terrorists”, targeting them with disinformation and intimidation, as well as threatening them with the death penalty. It has also intensified its persecution against the Polish community. In contrast, none of the perpetrators of violence against the civilian population has been held to account. Over 850 civil society organisations have been liquidated. Independent trade unions are no longer allowed to exist. Hundreds of journalists have left the country to work in exile and continue to defiantly provide quality reporting to the public in Belarus. Reports of new arbitrary arrests, of abuse and inhumane treatment in custody come in every day.

“The use of brutal force with no respect for fundamental freedoms and rights must be held accountable. We are working to collect evidence of human rights violations by the Lukashenko regime.”

The use of brutal force with no respect for individuals, their fundamental freedoms and rights must be held accountable. Together with international partners, non-governmental organisations and human rights defenders we are working to collect and preserve evidence of human rights violations committed by the Lukashenko regime. Together with like-minded partners, the EU has also introduced six rounds of sanctions targeting 195 individuals and 34 entities responsible for brutally repressive and lawless actions against the people of Belarus.

The restrictive measures also target those involved with the instrumentalisation of migrants, the so-called Lukashenko ‘wallets’, those responsible for the forced landing of the Ryanair flight in May 2021, and those complicit in Russia’s full-scale military aggression against Ukraine. In addition, we have imposed targeted economic sanctions against the Belarusian regime, which includes trade in certain goods, and access to capital markets. The EU remains ready to consider more sanctions if the situation in Belarus continues to deteriorate.

“Sanctions will be lifted when the Belarusian authorities halt repressions, release all political prisoners, start an inclusive national dialogue and end their complicity in Russia’s war against Ukraine.”

At the same time, we have made it clear that sanctions are reversible and will be lifted when the Belarusian authorities halt repressions, release and rehabilitate all political prisoners, start a genuine, inclusive national dialogue and end their complicity in Russia’s war against Ukraine. We stand ready to mobilise a €3 billion comprehensive plan of economic support once a democratic transition will have taken place in Belarus. This clearly shows our long-term commitment to the peace, democratic aspirations and prosperity of the Belarusian people.

Over the past two years, I have met many Belarusians, and in particular, Sviatlana Tsikhanouskaya and her team on different occasions. I profoundly admire their perseverance, their courage, their commitment to continue standing up for dignity, for respect of fundamental rights, for their vision of a free, sovereign Belarus, part of the wider European family of nations. Since August 2020, the EU has committed about € 65 million in support to the people of Belarus - the victims of repression, civil society, independent media, women, youth and students, small businesses, health and culture.

“I profoundly admire the perseverance of the Belarusian people, their courage, their commitment to continue standing up for dignity, for respect of fundamental rights, for their vision of a free, sovereign Belarus, part of the wider European family of nations.”

On this second anniversary of 9 August 2020, I think of political prisoners who have been stolen years of life and their families who can only connect to their loved ones via rare prison-censored letters; of inmates in serious medical conditions who may simply not live to see their release; of the invaluable human capital being lost for Belarus due to persecution and forced emigration, preventing so many people from serving their people and their land.

Sovereignty and democracy are inextricably linked

At this turning point in European history, as Russia has brought war back to Europe, one realises more than ever that sovereignty and democracy are inextricably linked: sovereignty can only be safeguarded by the people of a country, and only their free will can be its validating foundation. A tyrant, who violates the rule of law and fundamental rights and freedoms, is also capable of abandoning the sovereignty of his country to preserve his regime. As I reaffirmed solemnly yesterday in the name of the EU and its 27 member states, we will stand with the people of Belarus, as we will stand with the people of Ukraine, as long as it takes to secure our common future in a safe, sovereign, democratic and prosperous Europe.