The Arctic, a key region for the EU and global security

HR/VP Blog – The Arctic is a fascinating region and Arctic affairs are becoming ever more geopolitically important. The impact of climate change, security issues and rivalries are growing, as is the need for cooperation and multilateral agreements. 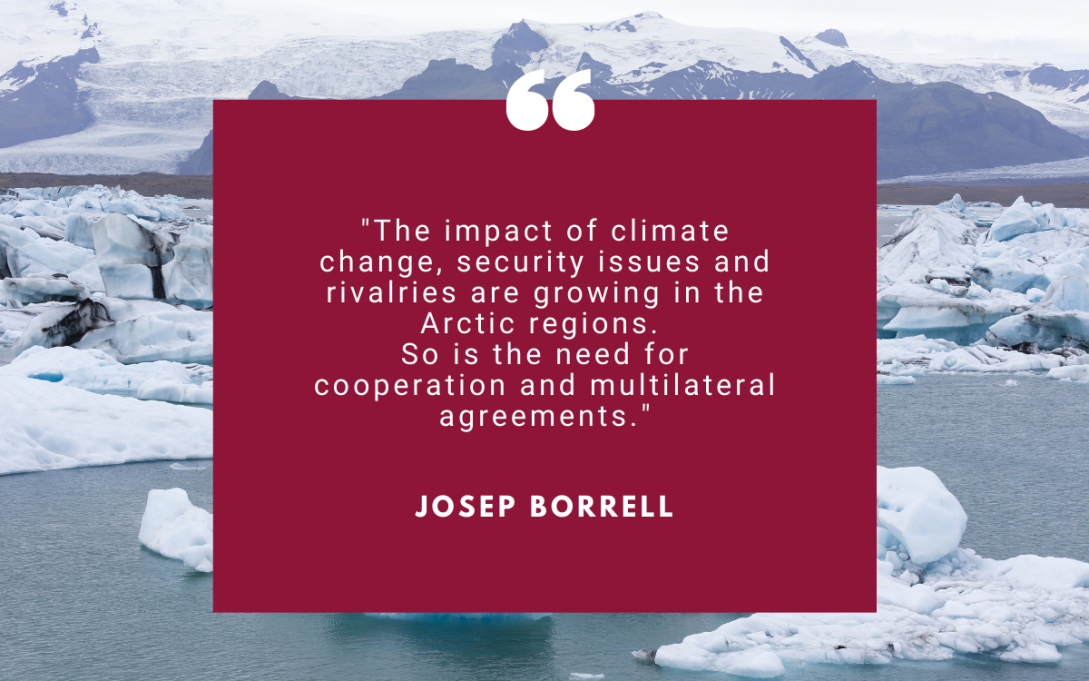 Yesterday, I gave a keynote address to the Arctic Frontiers conference, which was also attended, amongst others, by the Prime Ministers of Finland, Sweden, Norway and Iceland as well as by my colleague Commissioner Sinkevicius.

The Arctic regions are a perfect illustration of why we need the EU Green Deal, and of how broadly we must conceive Europe’s geopolitical interests. Let me explain why a safe, stable, sustainable, peaceful and prosperous Arctic is important not just for the Arctic itself, but also for the European Union and actually the whole world.

Climate change is the biggest threat

As I have often said earlier, regardless of the current pandemic, climate change remains the biggest global challenge that humanity is facing. This is especially true for the Arctic, where temperature increases are double global averages: an additional 2 degrees Celsius globally becomes 4 degrees or more in the Arctic.

Consequently, the melt of ice and the thaw of permafrost is already accelerating. The impact on migrating fauna and flora from longer warm seasons and shorter cold seasons will be dramatic. Last summer saw the second lowest level of Arctic sea ice since records began. We also witnessed gigantic wildfires across the Russian and Scandinavian Arctic, temperatures as high 38 degrees Celsius in Arctic Siberia and critical oil spills as thawing permafrost caused key storage infrastructure to collapse. Over the next decades the Arctic open coastal stretches will become ice-free during summers and increasingly during winters.

The only way to address this crisis is through national measures combined with international cooperation. Under the EU Green Deal, we are pushing hard to reform our internal policies and achieve carbon neutrality in 2050. However, we also know that the European Union only accounts for around 7-8% of global emissions, so we must work with all our partners around the world, and not least the Arctic states, to reach the aims of the Paris Agreement.

In connection with climate change, there is also a lot of attention these days on hard security issues and on competition for resources in the Arctic region. Russia, for instance, is rebuilding many of its Arctic military capabilities that had fallen into disrepair at the end of the Cold War.

The US together with NATO forces have carried out exercises in Arctic waters, and China is becoming increasingly interested in the economic potential of the region and the possibilities for shipping offered by the melting of boreal sea ice. In its 2018 Arctic policy China even described itself as a ‘near Arctic state’. These developments cannot be separated from global geopolitical dynamics.

With growing competition for resources and influence, it is more important than ever that international cooperation remains the norm in the Arctic region. So, while others may push for nationalist approaches and power projection, the EU must continue to bang the drum for regional and multilateral cooperation to solve related challenges.

While the Arctic states hold the primary responsibility for tackling issues within their territories, many of them can indeed best be addressed through regional and multilateral cooperation.

Take dangerous waste left in and around Arctic waters: we need circumpolar cooperation to mitigate successfully related risks. Alternatively, take social inclusion: the challenges facing indigenous reindeer herders do not stop at national boundaries. When it comes to shared standards in shipping, best practices in telemedicine, northern agriculture, or energy and sustainable heating, we are also more effective working together.

Those living in the Arctic regions, in particular the indigenous peoples and the younger generation know best how important and difficult it is to balance environmental aims with the retention of jobs and benefits from economic activity in their regions. We will continue to pay the utmost attention to their opinion, in particular that from indigenous peoples who have unique knowledge about the landscapes and are first hand witnesses to its changes. Changes that pose imminent threats to us all and direct threats to their way of life in the Arctic.

We want to help achieve a robust balance between the need for precaution and preservation of the environment, and the desire to use and economically develop the Arctic regions and their resources to the benefit of local inhabitants. Over the last seven years, the EU mobilised 200 million euros into Arctic research, linked to the EU’s know how in Earth observation, polar science and climate action.

"We need balance between need for precaution and preservation of the environment, and the desire to use and economically develop the Arctic regions and their resources to the benefit of local inhabitants"

We can do much to stimulate the development of innovative technologies in the Arctic that will make a major contribution to the green transition and meet the socio-economic expectations of future generations. EU science, innovation and cross-border funding programmes are already helping the development of renewable energy projects and the phase-out of damaging traditional fuels. The Arctic offers huge potential as a test-bed for geothermal, wind and hydro projects, the carbon-free production of steel, greener battery production and the like. This is important for the peoples who live there, but their innovation and sustainable use of resources can also become key to Europe’s strategic autonomy. As Europe transitions to a carbon-neutral future, it will require supplies of critical minerals, many of which are present in Arctic regions. In this particularly fragile context, strict environmental impact assessments will of course be crucial.

Having this complicated puzzle in mind, the European Union is actually updating its Arctic policy. This updated policy, which we will unveil in the autumn, will allow us to take our engagement in the region to the next level.