23.05.2022 Press and information team of the Delegation to UKRAINE

HR/VP Blog - We face a major geopolitical crisis with the war against Ukraine and at the same time a major ecological and security threat with climate change. REPowerEU is the integrated response to this double challenge. The Commission and I tabled this week specific concrete proposals in many domains including a more ambitious and targeted EU energy diplomacy. 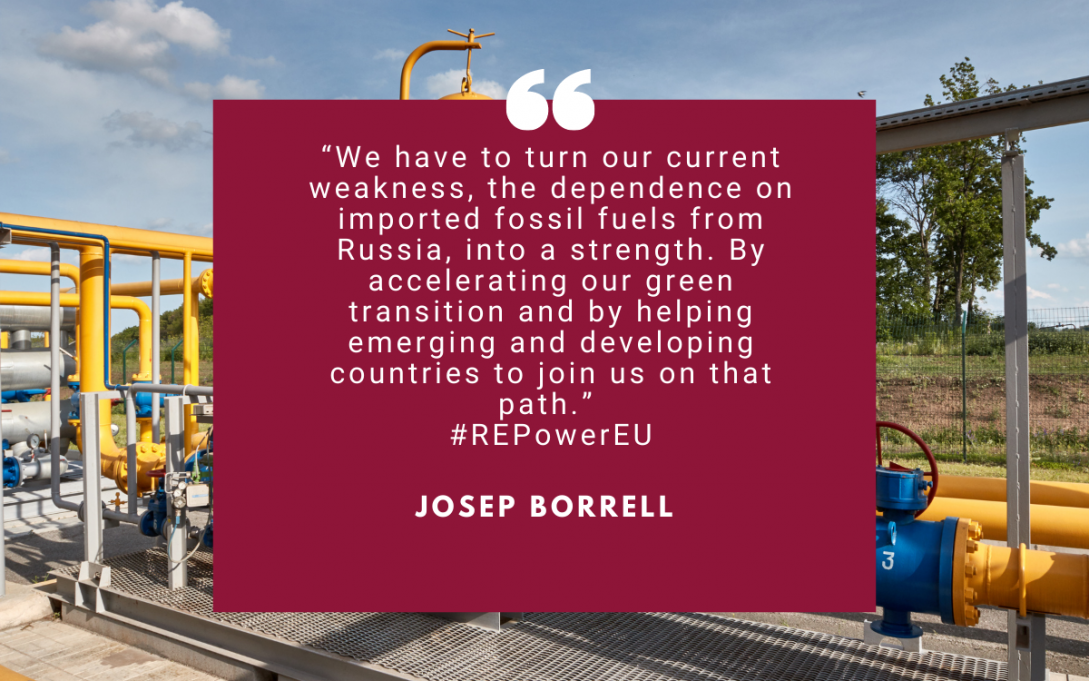 Energy policy has always been a geopolitical issue and this has become even clearer now with the war on Ukraine. For years we have debated the need to reduce our dependence on energy imports from Russia, a country that uses energy as a political weapon. Now we know we can no longer afford to put this off: we are funding the Kremlin’s ability to wage war against Ukraine. Doing this will not be an easy task and will require internal actions on numerous fronts detailed in the REPowerEU plan.

We have to ensure that our short-term goal - depriving Putin of the resources and levers that fossil fuels give him - is coherent with our medium-term objectives of becoming carbon neutral by 2050.

This also has numerous implications for EU foreign policy and our partnerships with many regions around the world. We have to ensure that our short-term goal - depriving Putin of the resources and levers that fossil fuels give him - is coherent with our medium-term objectives of becoming carbon neutral by 2050. This is the narrow path we have tried to define through the Strategy on the EU's external energy engagement adopted last Wednesday.

Russia is today Europe’s largest gas supplier with more than 40% of our consumption. We want to end this dependence by 2027. Most of the gas and oil we import from Russia will be substituted with renewables or energy efficiency and savings. But to provide the remaining gas needed, the EU must increase its imports from non-Russian sources.

By doing so, we have to take into account that the global energy landscape will change rapidly, as the world embarks on the green transition. In the 20th century, energy increasingly became a source of national power and its absence a strategic vulnerability. Oil and gas producing countries exercised their power in the international system. Countries without fossil fuel resources or where the demand for oil outpaced its own production, adjusted their foreign policies to ensure access. Now, the move away from oil and gas may reconfigure the world just as dramatically as we saw a century ago.

The global energy landscape will change rapidly, as the world embarks on the green transition. The move away from oil and gas may reconfigure the world just as dramatically as we saw a century ago.

While trade in fossil fuels will decline, new commodities such as hydrogen will become more relevant and be traded internationally. This will change the global balance of power because the capacity to produce renewable hydrogen is much more evenly distributed than producing oil and gas. The REPowerEU plan foresees an additional 20 million tonnes of renewable hydrogen by 2030 to replace Russian gas, including 10 million tonnes of imported hydrogen. As EU, to replace gas imports from Russia, we have to favour strategies that encompass both gas and green hydrogen to minimise the risk of so-called stranded assets. This is more easily said than done, but it is the way we have to go.

We are working on a Mediterranean Green Hydrogen Partnership and this should be the first step for a broader renewable hydrogen cooperation between Europe, Africa and the Gulf, another area of abundant resources for producing hydrogen. This issue is part of the Gulf strategy that we adopted along with the REPowerEU plan: transition to producing green hydrogen is an essential part of the shift that oil and gas producing countries have to undergo during the next decade. South Africa and Namibia are also developing their renewable hydrogen sector and have attracted the interest of EU industry.

Cooperation in this field implies promoting local consumption of renewable electricity and hydrogen and the development of green industries in partner countries. The EU regulatory framework for hydrogen is the most advanced worldwide. Based on this, we should lead to develop a global rules-based hydrogen market and to kick-start it,the EU  considers launching a Global European Hydrogen Facility.

The need to balance long- and short-term

We need however to balance the long- and the short-term: to get rid of Russian gas, we have to import more gas from other sources in the short term. We must find new suppliers in a coordinated way: it makes sense to try to replicate the ambition of the common vaccine purchasing programme by developing a ‘joint purchasing mechanism' which will negotiate and contract gas purchases on behalf of participating Member States. We are not there yet but for now, we have launched an EU Energy Purchase Platform, open also to Ukraine, Moldova, Georgia and the Western Balkans, to coordinate our efforts and facilitate joint purchases of gas and hydrogen.

Diversification of supplies is underway

When it comes to diversification of supplies, the European Commission and the US have already agreed on additional Liquefied Natural Gas (LNG) deliveries through US exports but also with other partners. We are also working with Canada on possible LNG and hydrogen deliveries. Before this summer, the EU aims to conclude a trilateral agreement with Egypt and Israel on supplying Europe with LNG. Japan and Korea have already redirected a number of LNG cargoes to Europe and Qatar stands ready to facilitate swaps with Asian countries.

In terms of pipeline gas, Norway has already increased its deliveries to Europe and both Algeria and Azerbaijan have expressed their willingness to do so as well. Scaling up the Trans Adriatic Pipeline (TAP) capacity would also increase the gas supply to the EU and the Western Balkans. Countries in sub-Saharan Africa, and in particular in Western Africa such as Nigeria (already supplying 15% of EU 2021 imports), Senegal, and Angola also offer untapped LNG potential.

Additional gas supplies should be coupled with tackling methane leaks. 70% of methane emissions from oil, gas and coal sectors could be stopped using today’s technology

These additional gas supplies should be coupled with tackling methane leaks. At least 46 bcm of natural gas is lost each year to venting and flaring in the countries that could supply the EU. Up to 70% of these methane emissions from oil, gas and coal sectors could be stopped using today’s technology, and almost half of them at no cost. To favour it, the EU stands ready to set up “You collect/we buy” mutually beneficial schemes.

Two weeks ago the Commission and myself as High Representative proposed a 6th round of sanctions including a gradual embargo for Russian oil, to stop funding the Kremlin war machine. Negotiations are still on-going to get the necessary unanimity and I hope we can agree on the package as soon as possible.

Russia is currently the world’s largest oil exporter and its brutal invasion of Ukraine has led to substantial price hikes on the global oil market. With our international partners, we have asked oil-producing countries to increase deliveries using the available spare capacity. The members of the International Energy Agency have also agreed to release 120 million barrels from emergency stocks, the largest release in IEA history. In this context, the full and effective implementation of the Iran nuclear deal (JCPOA) could facilitate the entry of Iranian oil supplies. The mentioned Communication on the Strategic Partnership with the Gulf details proposals on how to strengthen our relationship and cooperation with this energy rich region.

We are also helping Ukraine in the area of energy. The emergency electricity grid synchronisation with Ukraine and Moldova achieved last March has been a major step to ensure energy security. Reverse flows already allow to bring gas from the EU to Ukraine. Nuclear safety remains a major priority following Russia’s reckless behaviour at the Ukrainian nuclear sites. When it comes to the Western Balkan countries, we will propose to fully integrate them into the EU electricity market to accelerate the phasing out of coal in the whole of South-East Europe.

We are also stepping up our engagement on the green transition around the globe. We have the tools and experience to help give the hundreds of millions people in need a first–time access to energy through low-carbon future-proof technologies. Last year we launched the Global Gateway initiative to boost smart, clean and secure links in digital, energy and transport sectors across the world. The Global Gateway will be delivered bringing together the EU and its member states with their financial and development institutions to leverage up to €300 billion of investment in 2021-2027. 30% of the EU’s development aid envelope is also channelled into tackling climate change and the EU is the largest contributor to the $ 100 billion global Green Climate Fund in follow-up to COP26.

The example of the partnership with South Africa

To give a concrete example, the EU, together with international partners is implementing a $ 8.5 billion Just Energy Transition partnership with South Africa, focusing on coal phase-out. We are exploring the possibility of such partnerships with Vietnam, Indonesia and India. Despite significant differences in other domains, we cooperate also with China on energy after the country has decided to become carbon neutral by 2060 within the EU-China Energy Cooperation Platform (ECECP) and the annual high-level EU-China Energy Dialogue.

The EU’s goal of supporting the global transition also requires the reform and strengthening of the fragmented global energy governance landscape. We need well-functioning multilateral institutions that can help sharing technical knowledge and set agreed global rules and standards in accordance with the global climate goals.

Energy has always been a central geopolitical issue, and with the war against Ukraine and the fight against climate change it is today more than ever. We have to turn our current weakness, the dependence on imported fossil fuels, especially from Russia, into a strength by accelerating our own green transition and by taking the lead in the global transition and helping emerging and developing countries to manage this change.