10.05.2022
Abu Dhabi
Press and information team of the Delegation to UNITED ARAB EMIRATES

Op-Ed by HE Andrea Matteo Fontana, EU Ambassador to the UAE, and HE Xavier Chatel, Ambassador of France to the UAE on the occasion of Europe Day 2022. 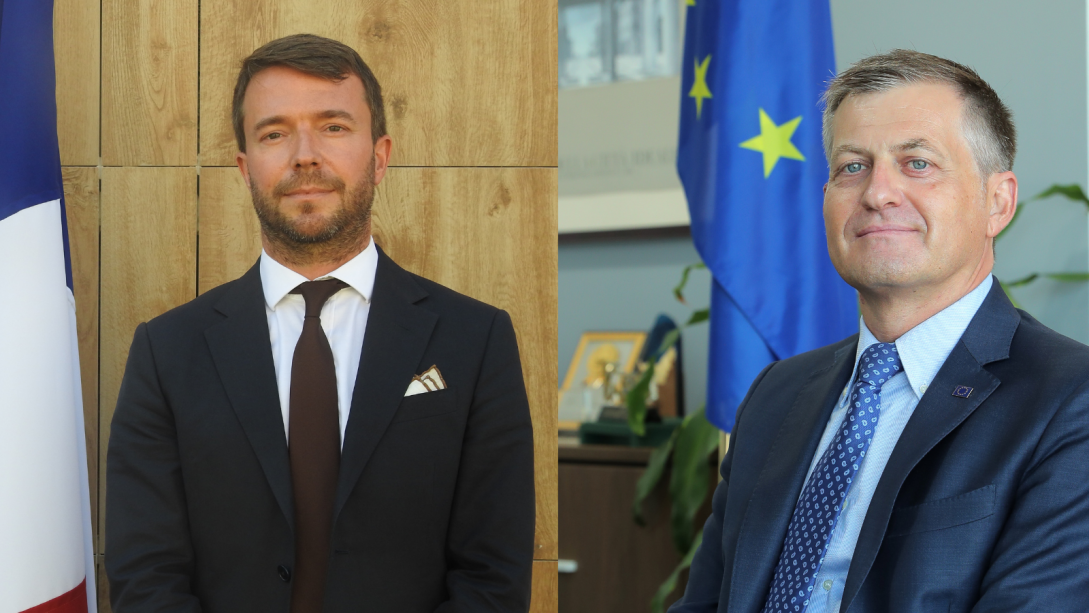 Every year on May 9th, we celebrate Europe Day, which marks the anniversary of the Schuman Declaration in 1950. This declaration paved the way for the successful creation of the “European Union”, a geopolitical entity which gathers today 27 countries, over 447 million inhabitants and 15% of world GDP.

But Europe Day is about more than celebrating the EU. It is about celebrating the principles of peace and unity. These principles strongly resonate here in the UAE after millions of people visited Expo 2020 Dubai, a magnificent event focused on innovation, dialogue and progress. The world came together to promote ideas and generate innovative solutions. The UAE has been a model to promote and disseminate a culture of tolerance, co-existence and inter-faith dialogue.

Sadly, however, this year, Europe Day comes amidst a tragic war in Ukraine with consequences affecting the entire world. A war unilaterally provoked by Russia without justification, which violates international law and the UN Charter. A war that has led to enormous suffering, loss of life, and an uncertain future for millions of Ukrainians fleeing the Russian aggression. The European Union is united against this unjustifiable, unprovoked and illegal aggression. We condemn the devastating attacks on the Ukrainian population and civilian infrastructure.

The EU, by contrast, has always been a peace project. Its fundamental principle is to reach consensus and unity among nations on a range of issues. The EU originated when French Foreign Minister Robert Shuman proposed the creation of a European Coal and Steel Community on May 9, 1950. At the time, in a continent ruined by World War II, the idea was simple: by further integrating economies, the war would become “not merely unthinkable, but materially impossible”.

Decades after this milestone, the EU has not only become an economic entity, but is also a political union built around core values of democracy, rule of law, equality, human dignity and freedoms. These values are just as essential to the European peace project as are economic development and prosperity.

Today, in the spirit of Europe Day, and as we designate 2022 the European Year of Youth, there is an urgent need to revive efforts to foster peace and stability. War and violence, the devastating effects of climate change, bigotry and intolerance, are not things that we want to bequeath to future generations. The world is an increasingly interconnected place. The ripple effects of the war in Ukraine have been disastrous on people in the poorest and most conflict-ridden corners of the world. From rising commodity prices that are threatening food and energy security to the disruption of global supply chains, to mention a couple.

On all these dimensions, the EU is acting. First of all by supporting Ukraine and its people against the illegal aggression they face. We stand by the Ukrainian peoples’ right to decide on their own future. The EU will remain steadfast in our resolve to maintain peace and stability and uphold international law around the world. Previous examples in the Middle East of the unilateral invasion of a country by another showed the need for a firm reaction, in order to prevent further destabilization.

The EU also acts by hosting millions of Ukrainian refugees. By adopting targeted sanctions. And by supporting the “FARM initiative” (Food & Agriculture Resilience Mission), alongside G7 and African Union, which aims at ensuring food security for most vulnerable countries.

The EU has also taken a number of steps to contribute to international security. One of the EU’s operations, European Maritime Awareness in The Strait of Hormuz (EMASOH), takes place in the Strait of Hormuz to promote safe transit and freedom of navigation for merchant shipping. And when UAE security was threatened, we answered the call. Right after the January attacks, French planes were patrolling the UAE’s skies against drone and missile threats.

Other challenges are ahead of us. Youth everywhere are growing up to face an uncertain future, with the threat of climate change. To tackle this issue, we must work together – not only as Europeans but as citizens of the world. Here again, the EU is acting. It set ambitious objectives to reduce greenhouse gas emissions by at least 55% by 2030, compared to 1990 levels. Achieving these emission reductions in the next decade is crucial to Europe becoming the world's first climate-neutral continent by 2050.

In February this year, under the French Presidency of the European Council, more than 100 countries have also pledged to preserve oceans through a series of commitments ranging from preserving biodiversity to tackling pollution in the sea.

It is only through such dialogue and international cooperation that we will be able to continue to build upon the European peace project as well as the global peace project.

The EU and its 27 Member States were active participants in Expo 2020 Dubai. We have used this incredible opportunity to foster relations, tackle global challenges and identify areas of mutual interest with partners such as the UAE. Areas where we can add value and learn from each other. Now that Expo is over, we look forward to exploring these further with the UAE and beyond, to enhance our partnership and cooperation in the years and decades to come. We must build on this momentum looking ahead towards COP28 in Abu Dhabi in 2023.

This year, we celebrate Europe Day with heavy hearts, but we will use this occasion to mark our resilience and our steadfast commitment to a rule-based order and to peace and unity. We will raise awareness about the values and the vision this day represents for Europeans and for people everywhere.

Read the published version in Arabic on Al Ittihad Newspaper.