On 10 April 2021, a special system of preferences of the European Union (EU) for sustainable development and good governance (GSP +) comes into force for Uzbekistan, where Uzbekistan was admitted as a beneficiary country under the Generalized Scheme of Preferences (GSP). 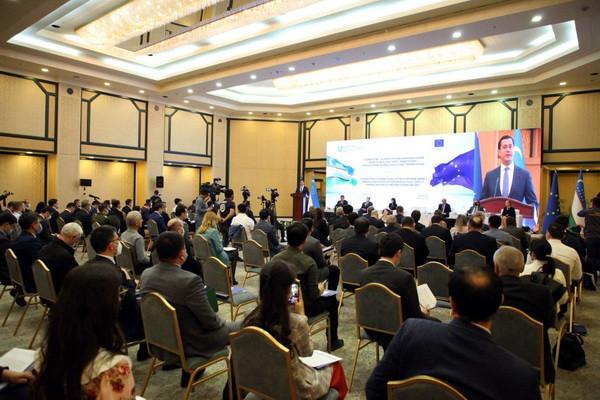 On 10 April 2021, a special system of preferences of the European Union (EU) for sustainable development and good governance (GSP +) comes into force for Uzbekistan, where Uzbekistan was admitted as a beneficiary country under the Generalized Scheme of Preferences (GSP).

This event was dedicated to a press conference held at the International Hotel on April 10, 2021 with the participation of the Ministry of Investment and Foreign Trade of the Republic of Uzbekistan, the Delegation of the European Union in Uzbekistan, the diplomatic corps, representatives of the private sector, as well as representatives of local and foreign media and bloggers.

I am sure that this will give a powerful impetus to investors and representatives of the private sector, primarily from the EU countries, to implement promising projects in Uzbekistan, as well as form a solid foundation for diversification and accelerated development of trade and economic relations between Uzbekistan and the EU countries "

Welcoming the participants of the press conference, the head of the European Union delegation to Uzbekistan, Ambassador Charlotte Adrian noted: “The application of the GSP + system of preferences in relation to Uzbekistan is very timely, especially during the period of the country’s recovery from the COVID-19 crisis. This is also a good incentive for the further implementation of reforms in Uzbekistan related to the implementation of 27 major international conventions on the environment, human and labor rights, as well as good governance.” As a member of the GSP + system, Uzbekistan will receive additional economic benefits compared to the standard GSP due to the complete cancellation of tariffs for two-thirds of the product lines covered by the GSP, which, in turn, can promote export growth and attract additional investment to the country. GSP +’s commitment to sustainable development further strengthens Uzbekistan’s position as a reliable and forward-looking economic partner.

The level of use of preferences under the GSP in Uzbekistan is currently 87%. The product segments that benefit the most from reduced incentives are textiles and clothing, plastic products, and fruits, nuts and vegetables, indicating that Uzbekistan’s export structure is already more diverse than its Central Asian neighbors.

The GSP + scheme offers additional opportunities to increase trade between the EU and Uzbekistan, as tariffs will be lifted on a number of important export goods such as textiles, clothing and plastics. Despite its relative proximity to the EU market, the trade potential has not yet been fully exploited, as the EU is only seventh on the list of Uzbekistan’s export destinations.

But GSP + is more than a trading instrument. By joining the GSP + scheme, low- and low-middle-income countries are committed to effectively implementing 27 core international conventions on human and labor rights, environmental and climate protection, and good governance. The GSP regulation provides for the constant monitoring of the obligations of the recipients of GSP +.

The acceptance of Uzbekistan as a beneficiary of GSP + reflects reforms and consistent positive development in the socio-economic and labor spheres. The Uzbek government has initiated many ambitious reforms, in particular to improve the business climate, the judiciary, security services, working conditions, and administrative accountability and efficiency.

Awarding winners of the contest on the EU-Uzbekistan cooperation

New call for proposals under the Thematic Programme on Human Rights and Democracy!