Chief Observer Alojz Peterle presented the Final Report on the 22 October Mayoral and Municipal Assembly Elections at a Press Conference on Tuesday, 13 February in Pristina. 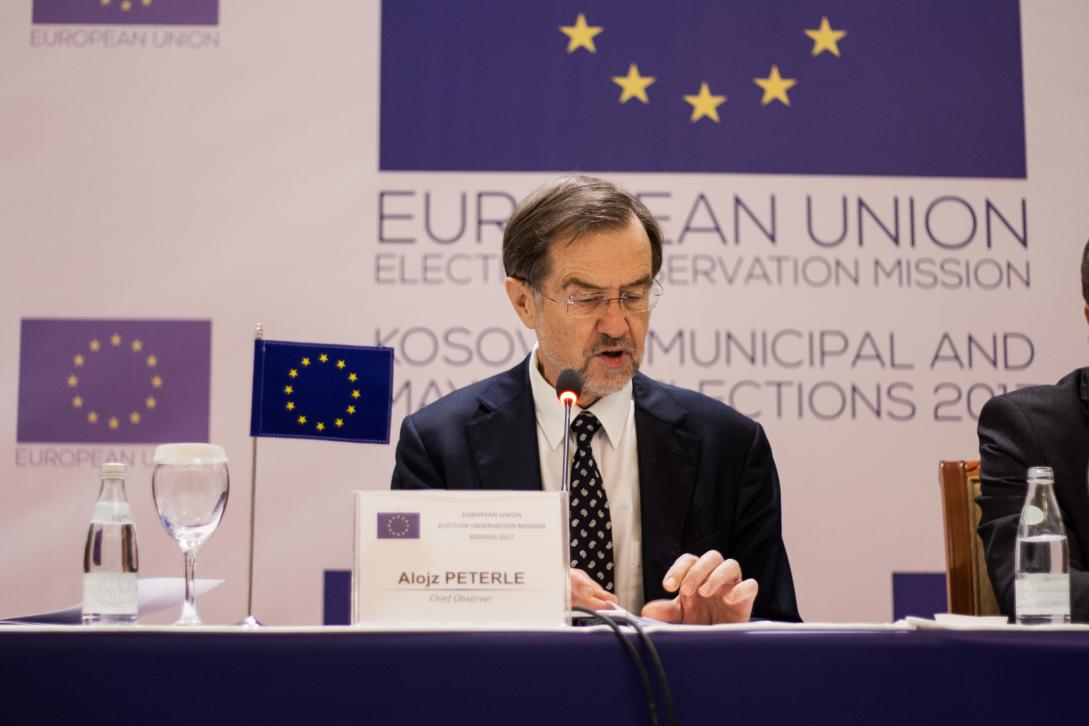 Chief Observer Alojz Peterle, Member of the European Parliament from Slovenia headed the Election Observation Mission, who returned to Kosovo to present the report to the Kosovo authorities, the Central Electoral Commission, political parties, civil society and the media.

“The EU EOM’s Final Report reflects the findings of the Mission’s Preliminary Statements that the elections were genuinely competitive in most of the Kosovo-Albanian majority municipalities, however that the campaign environment within many Kosovo Serb and other non-majority communities was marred by intimidation, Mr Peterle said during a press conference today.

“Long-standing weaknesses within the Kosovo electoral process need to be sufficiently addressed for example issues related to the voter register, to the training and the professionalism of polling station committees, to a deficient system for Out-of-Kosovo voting, to limited incentives for prosecution of criminal activities related to elections, to the lack of effective enforcement mechanisms for campaign finance requirements, and to the regulation of sponsored programs on TV.”

Mr. Peterle emphasized that political will from across the political spectrum is needed to address the recommendations including the priority recommendations, which include improvements to the voter list, better oversight of campaign spending, additional safe-guards to the Out-of Kosovo voting system, and enhanced participation of women in the electoral process.

“Elections are not only about election day but about the entire electoral process within an electoral cycle, Mr Peterle said. Electoral Reform is but one stepping-stone on the road towards the EU, however a very important one. The EU will be engaged in the follow up during the inter-election period and is ready to offer electoral assistance and financial support with a focus on the implementation of the EOM’s recommendations and other recommendations that would advance the electoral and democratic reform in Kosovo.”

On 20 February the EU EOM will hold a roundtable to discuss these recommendations as well as suggestions in more detail and to receive feedback from national stakeholders and to develop an action plan on how to improve the electoral process.