International Day Against Homophobia, Transphobia and Biphobia (IDAHOT) The EU is going rainbow, “Breaking the Silence”

Today is the International Day Against Homophobia, Transphobia and Biphobia (IDAHOT). On this occasion, I want to focus this blog post on people who still suffer discrimination and violence because of their identity and because they cannot freely live and love according to their choice. More specifically, I want to pay tribute to the lesbian, gay, bisexual, transgender and intersex (LGBTI+) community and to all the LGBTI+ activists who defend the right to be oneself. 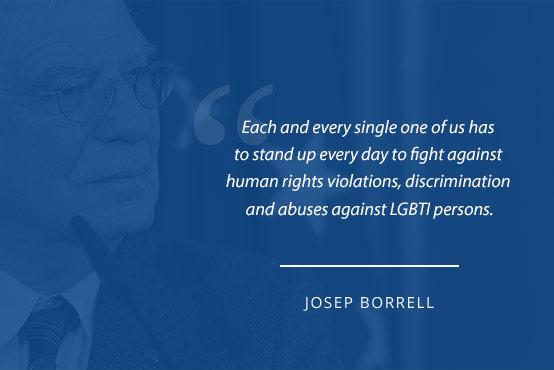 Much achieved, but we have to continue the fight

I do this it as a person coming from a country that has made huge progress in recent years in recognising the rights of the LGBTI+ community, which was not the case in earlier days and during much of my youth. I vividly remember how homosexuals and other sexual minorities were facing tremendous punishments and discrimination during the Franco regime. And when in 1998 I competed for the leadership of Spain’s socialist party, rumours were spread according to which I was homosexual and had an affair with a man – to discredit me and to damage my candidacy – implying somehow that somebody who is gay is not fit to lead the party or the country. Since then, same-sex marriage has been legalised in Spain in 2005 by the socialist government, making Spain the third country in the world to allow, at a national level, same-sex couples to marry. And today, more and more political leaders in Europe can openly declare their sexual orientation.

However, we have to continue to fight for the right of every human person to be proud of who they are, to define their own identity and to choose to be with the ones they love. As a society and as a community, our rights are only secure if they apply to everyone. and our actions have to reflect the importance of recognition and equality, not just for LGBTI+ persons, but for everyone.

The first article of the Universal Declaration of Human Rights states “All human beings are born free and equal in dignity and rights”. Unfortunately, there are still many places in the world where this bold promise is far from the reality, and until 1990 homosexuality was still   classified by the World Health Organisation as a mental disorder. It was only on 17 May 1990 that this had been changed. Because of this milestone in the fight for equality and dignity and to commemorate this day, IDAHOT is now being celebrated every year on 17 May.

Now, during the coronavirus crisis, in some places around the globe the LGBTI+ community is facing additional problems including stigmatisation and the fear of not receiving the required medical care. Social distancing is also difficult for those who are not accepted by their families.

That is why the EU is joining the UN and civil society organisations in this year’s theme of “Breaking the Silence” and the banner of “Going Rainbow”. This theme has been picked up by the LGBTI+ civil society and is promoted by the UN’s “Free and Equal” campaign. The EU speaks out against discrimination and encourages all states to ensure that sexual orientation and gender identity do not form the basis for criminal penalties and discrimination.

As EU, we try to match words with action. We support LGBTI+ human rights defenders through special protection mechanisms using the European Instrument for Democracy and Human Rights. As a result, we save lives and help to overcome suffering caused by violence. The EU remains one of the top donors worldwide to LGBTI+ civil society organisations. We run, for instance, numerous projects in Southern and Central Africa, Latin America and Russia. Our help includes offering preventive security and protection from threats, supporting local initiatives and grassroots movements, encouraging the creation of alliances and networks, and helping with the reporting and documenting of cases of discrimination. But most of all, we staunchly keep raising high the flag of universal rights.

Today, in many countries around the world, the EU will fly rainbow flags in our Delegations. Rainbow colours lid up our buildings in Brussels in the night of 16/17 May. And we have launched the rainbow challenge on our social media channels. In addition to these important and symbolic acts, it is up that each and every single one of us to stand up every day to fight against human rights violations, discrimination and abuses against LGBTI persons worldwide. Not only on IDAHOT, but every day and everywhere.