Why the EU needs to be a global maritime security provider

HR/VP Blog – On 25 January we launched the first pilot of the new Coordinated Maritime Presences (CMP) concept in the Gulf of Guinea off the coast of West Africa. In addition to our existing naval operations in the Mediterranean and in the Western India Ocean, we are strengthening our role as a global maritime security provider. 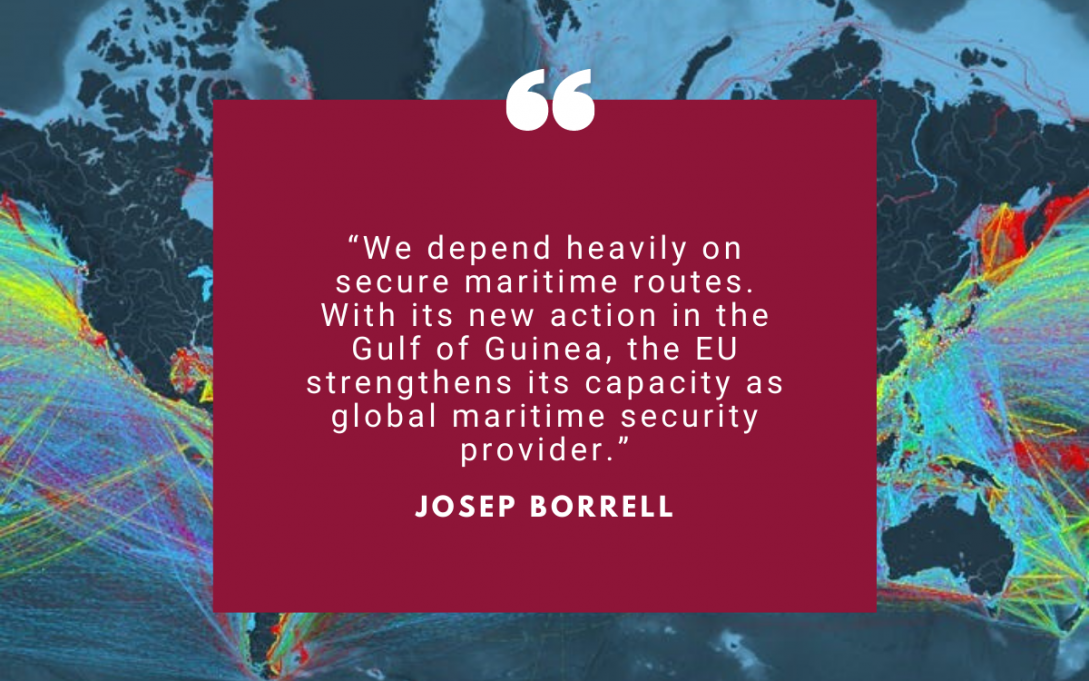 On 23 January, pirates hijacked a Turkish cargo ship off the coast of West Africa, killing one crewmember and kidnapping 15. According to the International Maritime Bureau of the International Chamber of Commerce, 195 incidents of piracy and armed robbery against ships have been registered worldwide last year, 33 more than in 2019. As the second largest exporter and the third largest importer in the world, the EU rely heavily on maritime transport and infrastructure. However, secure maritime routes are not only important for us: without them, about 90% of the goods currently available are at risk of simply not reaching their customers around the world. Thus, ensuring a safe maritime environment is a global public good that need international cooperation to fend off the increasing challenges related to geo-strategic rivalries, piracy and organised crime.

Because of this growing maritime insecurity, many partners, coastal countries and the maritime industry are asking the EU to assume a more prominent role. Not only in our immediate vicinity, but also further away. The EU has the technical capacity and the resources to address many of these challenges, from tackling all sorts of seaborne criminal activities to natural or man-made disaster response.

“The EU has the capacity and the resources to address many challenges at sea, from tackling all sorts of seaborne criminal activities to natural or man-made disaster response.”

We are already engaged in this field, notably with two major naval operations. One is Operation IRINI in the Mediterranean aiming to implement the arms embargo to Libya imposed by the UN Security Council, prevent the illicit export of petroleum from that country and contribute to the disruption of human smuggling and trafficking networks. The second one is EUNAVFOR Atalanta in the Western Indian Ocean to help fight the Somali-based piracy and armed robbery at sea off the Horn of Africa.

With the launch of the Coordinated Maritime Presences (CMP) concept in the Gulf of Guinea, we add another element to our engagement to promote global maritime security.

A new and flexible tool to increase maritime security

What is this new CMP concept? Depending on the situation, launching a new EU naval operation from scratch is not the only option, and sometimes not necessarily the most appropriate. In fact, many member states already have a large national presence at sea, notably in areas that are of interest to the entire European Union. These naval assets of EU Member States are present all year round in all maritime areas of the world.

“The Coordinated Maritime Presences tool will enable the EU to use these existing member states naval and air assets to increase its capacity to act as a maritime security provider.”

The CMP tool will enable the EU to use these existing member states naval and air assets to increase its capacity to act as a maritime security provider. Coordination will take place on a voluntary basis, with assets remaining under the national chains of command. This light and flexible instrument allows EU member states present in areas of interest to cooperate through the Maritime Area of Interest Coordination Cell (MAICC) established within the EU Military Staff, using the MARSUR network, a technical solution developed by the European Defence Agency. This network will be used for the first time in this pilot to facilitate the exchange of operational information, such as ship positions, tracks, identification data or images.

By building synergies between existing national assets, the CMP mechanism will be beneficial to all member states, the EU and a wide range of stakeholders and like-minded partners around the world.

Launching the Coordinated Maritime Concept pilot in the Gulf of Guinea

The CMP concept will be implemented for the first time in the Gulf of Guinea and we do so naturally at the request of and in close cooperation with our African partners of the organisation of the Yaoundé Architecture, supporting their objective to tackle piracy and criminal activity at sea. EU member states like France, Italy and Spain are already present in the region. They will provide the naval and air assets that will support this implementation.

“France, Italy and Spain are already present in the Gulf of Guinea. They will provide the naval and air assets that will support the implementation of the CMP pilot”. Nowhere around the world is indeed the deterioration of maritime security currently more prominent than in this Gulf: it has experienced an unprecedented rise in the number of crew kidnappings in recent years. In 2020, 84 attacks took place on ships, with a record 130 persons kidnapped in 22 of these incidents. The region also experienced a nearly 60% increase in kidnapping for ransom between 2018 and 2020. It now accounts for 95% of all kidnappings at sea. Incidents are particularly dangerous there, as over 80% of attackers were armed with guns.

“The Gulf of Guinea experienced a nearly 60% increase in kidnapping for ransom between 2018 and 2020. It now accounts for 95% of all kidnappings at sea.” Besides piracy, the Gulf of Guinea also suffers from numerous other organised crime activities. Persistent illegal fishing in West African waters cost the sub-region, according to FAO, an estimated $1.3 billion a year. It means also there is not enough fish for their population. Meanwhile, narcotics and other illegal goods are trafficked along the coast and across land borders, which harm local communities and fuel problems in Europe.

“Youth unemployment in the Gulf of Guinea countries is estimated at over 60%. Addressing these factors is also necessary to enhance maritime security in the region.”

More broadly, unemployment in the countries of the Gulf of Guinea is estimated at around 40% with youth unemployment at over 60%. The risk that young people slip into criminal activity to make a living is high, as many are pushed to become foot soldiers for pirate and criminal gangs, or led into irregular migration in very dangerous conditions. Addressing these factors is necessary to enhance maritime security in the region. That is why the EU contributes actively in parallel to the development of the local capacities of coastal states in the region.

In short, global maritime security is a vital issue for the EU and I am very pleased that we can make progress in this area with this new concept, thanks to the work of the EU military staff and the commitment of our member states.