Mogherini calls for Global Compact to meet challenge of migration 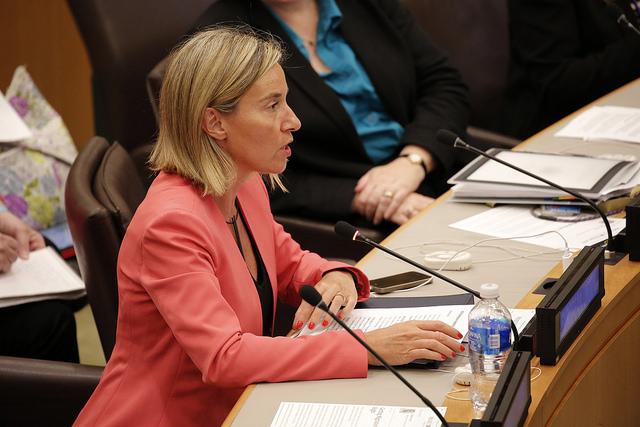 “We live in a world of seven billion people, with dramatic demographic imbalances, where inequalities are growing, where climate change is reshaping the land and the borders of human civilisations,” Mogherini said. “So it is up to us to build a new system for human mobility; human mobility has always existed in human history. But today the challenge is at a different scale. We need to build a system for human mobility. A system where people can move safely, legally, voluntarily, in the full respect of their human rights and in a sustainable way.”Mogherini spoke at a UN Summit on refugees and migrants, stressing that "the European Union is finally turning words into action". She also presented the European External Investment Plan in a separate event at the EU Delegation in New York, and addressed the link between security and development in a panel discussion hosted by the Clinton Global Initiative.Her remarks came as the EU seeks solutions to the greatest flow of refugees since the Second World War. Yet Mogherini pointed out that the issue is a global one, with more refugees and migrants moving within Africa and within Asia than those coming towards Europe.Mogherini underlined the work the EU is already doing to deal with the challenges of migration: since 2015, European vessels working within Operation Sophia have saved more than 400,000 people in the Mediterranean. In Turkey, in Lebanon, and Jordan, the EU is helping over half a million Syrian children go back to school.She rejected the idea suggested by some observers that migration is a fight between the North and the South, between richer countries and developing ones.“We do not believe in this. We, in the European Union, believe in partnerships. We believe we are together in this and that only together we can give real answers. There is no clash between the North and the South. In fact there is massive room for win-win solutions.”“And win-win solutions cannot be imposed by one side on the other. They can only be agreed together. This is why we need a Global Compact. And in this field, our European Union is testing new tools and a whole new approach, finally. This is the core idea behind our new Partnership Frameworks of Migration Compacts as we have called them. From security to infrastructures, our priorities are set together with each of our partners, be them countries of origin or transit.”She pointed to the newly-announced European External Investment Plan, which aims to bring more private investments into fragile areas of the EU’s neighbourhood and Africa. It aims to mobilise up to €44 billion euros to bring private investments in Africa and in the Mediterranean. And she pledged that the EU experience would be fed into a new Global Compact, which should draw on the knowledge of UN agencies, as well as the private sector, civil society, diaspora communities and migrants’ organisations.“The new Compact has to respect the centrality of the 1951 Geneva Refugee Convention and its 1967 Protocol. It has to champion the new development paradigm enshrined in the Agenda 2030. It must be a Compact for partnership and for shared responsibility globally. You can count on us, on the European Union to continue to work together for the success of this process, and to finally move towards a global governance of human mobility,” Mogherini concluded.

Migration Summit Roundtable 5 on "Global compact for safe, regular and orderly migration - towards realizing the 2030 Agenda for sustainable development and achieving full respect for the human rights of migrants"