Freedom of Religion or Belief – Discussing an Agenda for Implementation

The EU, together with the Maltese Presidency of the European Council, organised yesterday an event in the margins of the 34th session of the Human Rights Council on Freedom of Religion or Belief (FORB), entitled "Towards an agenda for implementation". The panel debate aimed at encouraging a discussion on the recommendations provided in the Special Rapporteur's latest report related to the guiding framework to implement the right to FORB. 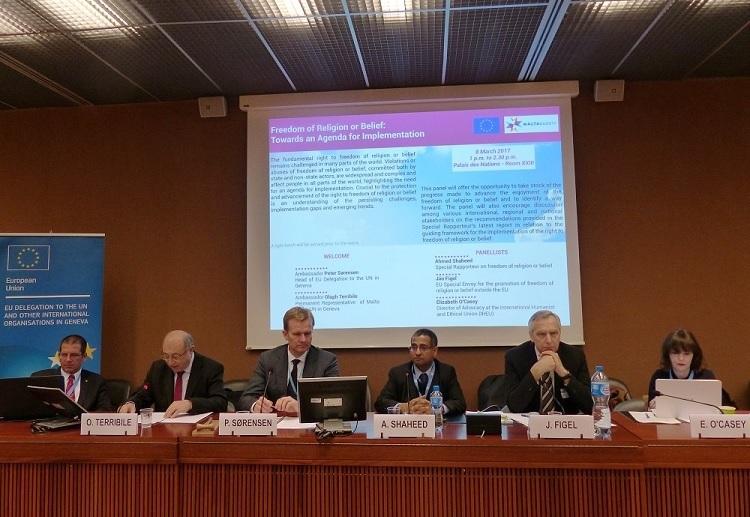 "Acts of violence and discrimination based on religion or belief, committed in the name of religion or national security, including against persons belonging to minority groups and women, continue to be perpetrated worldwide," said Ambassador Peter Sørensen, Head of the EU Delegation to the UN in Geneva in his opening remarks. He confirmed the EU's commitment to pursue and defend FORB as a key priority of EU's human rights policy. "An understanding of accomplishments in terms of the implementation and enjoyment of FORB, and the persisting challenges and emerging trends, is crucial to the protection and advancement of FORB," he underlined. He also highlighted the need for an agenda of implementation, and concerted and coordinated efforts by States, non-state actors and the international community to boost its operationalisation at all level.

Ambassador Olaph Terribile, Permanent Representative of Malta to the UN in Geneva, underlined the importance that Malta attaches to FORB. He referred to persecution based on religion or belief, and underscored Malta's commitment to those in vulnerable situations, recalling his country's experience in receiving large numbers of asylum seekers and refugees. He recognised the advancements in thinking on FORB and in addressing minorities' particular circumstances. "Intolerance must be challenged through dialogue and debate and not through closing the door to foreigners." He also mentioned the legal reform of blasphemy laws implemented by his country in 2016, which has been seen as a victory for freedom of expression.

"Freedom of religion or belief is a litmus test of respect of human dignity and human rights, if it is disregarded other freedoms are also disregarded," stated Jan Figel, EU Special Envoy for the promotion of freedom of religion or belief outside the EU. He described FORB as the deepest expression of personal freedom. "FORB is a must, it's a principle, it's a value," he said, underlining the EU's commitment to defending and promoting this freedom. He also emphasized the EU's approach of consensus and dialogue. "We cannot impose, but we can propose," he said.

Elizabeth O'Casey, Director of Advocacy at the International Humanist and Ethical Union (IHEU), encouraged the understanding of FORB as a broader concept, encompassing political and social rights. She stressed the need to better engage with faith leaders and civil society, and to provide a free space for discussion, favouring the use of a secular discourse based on universalist principles. She also highlighted the intersection and interlinkage of FORB with other rights, in particular with the right to freedom of expression: "Freedom of religion or belief is sometimes presented  in opposition to freedom of expression - I argue the opposite. The two rights should be pulled together. The manifestation of freedom of religion or belief is impossible without freedom of expression."

At the current 34th session of the Human Rights Council the EU is again tabling a resolution on FORB, promoting the freedom of conscience, thought, religion or belief, condemning intolerance, discrimination and violence, including against person belonging to religious minorities around the world. The resolution continues to urge States to step up their efforts to promote and protect this fundamental freedom.

invitation.pdf
Photo Galleries
HRC 34 - Freedom of Religion or Belief: Toward an Agenda for Implementation