A very difficult week lies behind all of us, with the Coronavirus pandemic and its global consequences dominating the headlines and our thoughts. These developments also overshadowed an important decision that did not receive the attention deserved. In the midst of the Coronavirus crisis, the European Union decided to open accession talks with North Macedonia and Albania. This is good news for the two countries, the Western Balkans and for all of Europe. 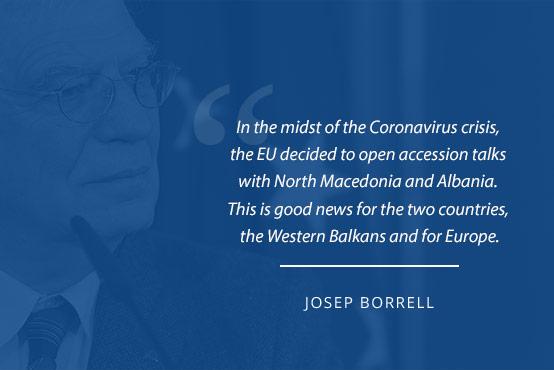 By making this important decision in such trying times, the EU moved forward on a truly important policy matter and it sent an important signal and clear message to the Western Balkans: the European Union is not complete without the Western Balkans. The EU proved to be united on one of its priority policies and did so while addressing a global crisis. The decision is indeed “a beam of light in this darkness all around”, as my esteemed colleague and Foreign Minister of North Macedonia, Nikola Dimitrov said, commenting the decision to open the accession talks with North Macedonia and Albania.

We have asked a lot from both countries, and they fulfilled it. Now, the EU also made the right step on its side. It is an encouraging message that hard work and real leadership on both sides leads to results.

In the same vein, I want to congratulate North Macedonia for becoming the 30th Member of NATO this week. This is an important step, further consolidating European and transatlantic security. I look forward to working closely together now also in the framework of EU-NATO cooperation.

With the start of the accession negotiations, a lot of work now lies ahead of us and the opening of accession talks was just a first step of an intense process. Profound social, political and economic reforms need to happen before the step to full membership. These transformations naturally take time and require efforts, but what is important is that the “beam of light” for two additional countries should also encourage the rest of the region to do what is needed and follow the path of reforms. For the benefit of the Western Balkans’ citizens.

In times like these, when we are all fighting an unseen crisis and its consequences, we have to demonstrate what European and global solidarity really means. Solidarity cannot be just a word that we use without any kind of commitment. Solidarity has to be proven by actions. Within the EU, Member States are showing solidarity as some of them are receiving patients from overburdened hospitals in other Member States, as well as sharing personal protective equipment between themselves. Joint work is also ongoing, to ensure repatriation of citizens stranded around the world. And we are not forgetting the people in the Western Balkans.

The EU announced this week a package of bilateral financial assistance to all six partners in the region. We will provide up to €38 million of immediate assistance to deal with the COVID–19 related emergency. This money buys respirators, masks and other medical equipment, it pays for flights bringing aid and covers the immediate needs of people. In addition, the EU decided to support the region by reallocating €374 million for the social and economic recovery of the region, once the emergency is over. This means saving jobs, businesses, social benefits, it means allowing people to continue with their lives once we overcome this pandemic.

Let me give you the concrete details of the EU’s immediate support to the health sectors of the individual Western Balkan countries and the support for the social and economic recovery:

This is a time to get serious on solidarity and cooperation. We need to work hand-in-hand, in solidarity, supporting each other, as nobody is able to deal with the current situation alone.