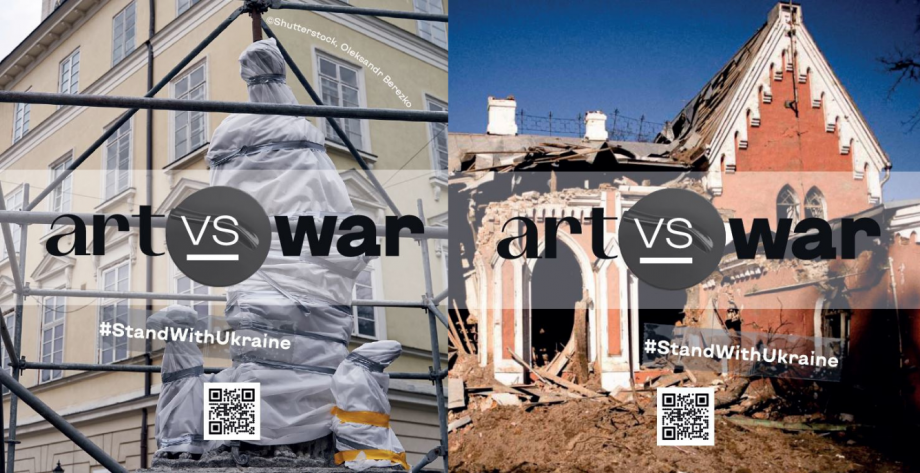 Objects of cultural heritage are purposely destroyed in Russia’s war against Ukraine. Ukrainian culture is an important part of the European heritage. The EU supports artists, culture professionals and culture organisations affected by the war. 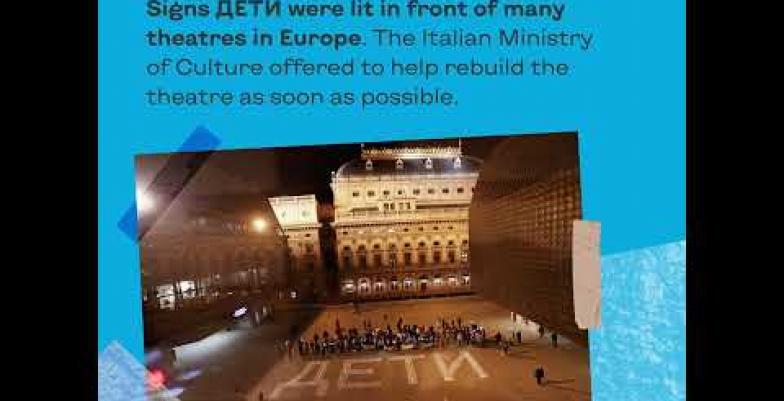 The Donetsk Academic Regional Drama Theatre in Mariupol is one of the oldest theatres in eastern Ukraine, hosting popular performances and attracting international visitors to the Ukrainian port. Since the beginning of Russia’s war against Ukraine, the theatre was used as a bomb shelter. The square around it was marked with the sign ДЕТИ (CHILDREN).

On March 16, Russian aviation dropped a heavy bomb on the theatre while approximately 1000 civilians sheltered under its roof. The building was levelled and hundreds of people tragically lost their lives. Mariupol remains under blockade and heavy Russian attack from air and land.

In an indication of hope and solidarity signs with the word 'ДЕТИ' were lit in front of many theatres in Europe. The Italian Ministry of Culture offered to help rebuild the iconic theatre as soon as possible. 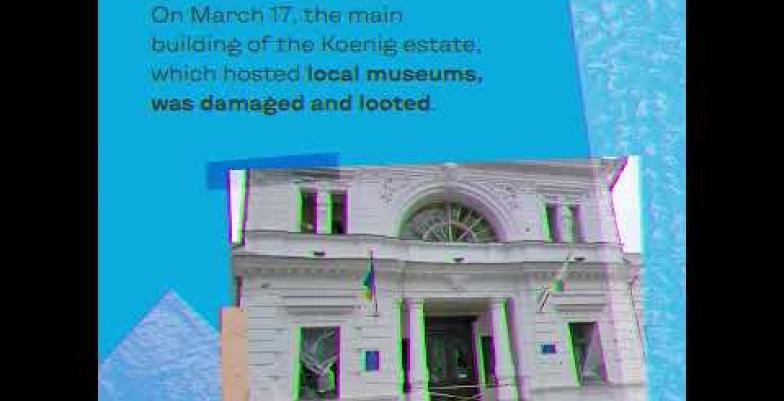 Located midway between Sumy and Kharkiv, the town of Trostyanets was under Russian occupation for over a month, since the first days of the invasion.

Founded back in 1660, Trostyanets started its dynamic development at the end of the 19th century, when sugar magnate Leopold Koenig settled there. While his business empire was growing, Koenig invested in infrastructure, education and quality of life for locals. His great-granddaughter lives in Germany and regularly donates to the town’s hospital and library.

Leopold Koenig left a rich architectural heritage, carefully taken care of for many decades, but now devastated by Russian troops.

On March 1, the walls and windows of the Round Yard were damaged by shelling. On March 17, the main building of the Koenig estate, which hosted local museums, was damaged and looted. On March 27, before leaving town, Russian soldiers set fire to the house of the estate manager which was home to the Forestry Research Institute and a Forestry Museum.

When Trostyanets was liberated, architects and urbanists visited the town to start planning its recovery. 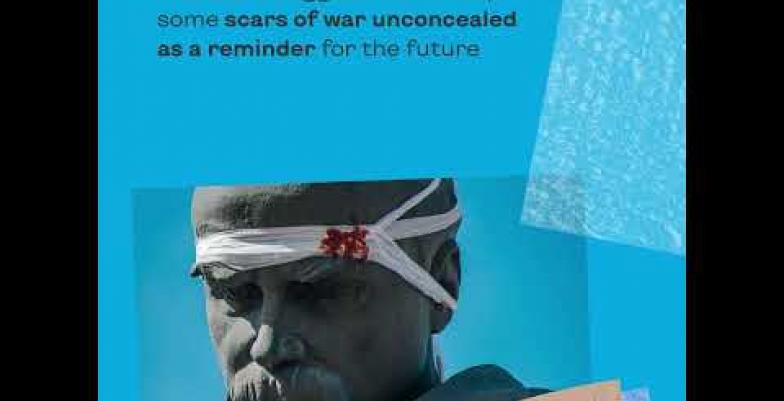 Monuments to Taras Shevchenko – one of the most celebrated Ukrainian poets – are present in most of the cities, towns and villages of Ukraine. There is one in Borodyanka too.

Situated 50km from Kyiv and 25km from Bucha, Borodyanka was home to 13,000 inhabitants until it severely suffered from the Russian occupation. Shevchenko’s statue witnessed the atrocities of the invasion and on the 2nd of April Russian shelling damaged the monument. Standing in the middle of an almost fully ruined town, the statue now bears even more symbolism than ever.

Shevchenko’s poem dating 1860 resonates like a message through centuries:

And in our land, by faith retrieved,
No foemen shall be brought to birth,
Mothers and sons shall show their worth
And love shall reign throughout the earth.

After the liberation of Borodyanka, locals wrapped Shevchenko’s wounded head in symbolic bandages as an act of artistic documentation of Russian war crimes. There are suggestions to keep some scars of war unconcealed as a reminder for future generations, like Gedächtniskirche in Berlin.

Meanwhile, in Kharkiv and other Ukrainian cities targeted by Russian missiles, Shevchenko’s monuments are protected with piles of sandbags, which often look like an art manifesto. 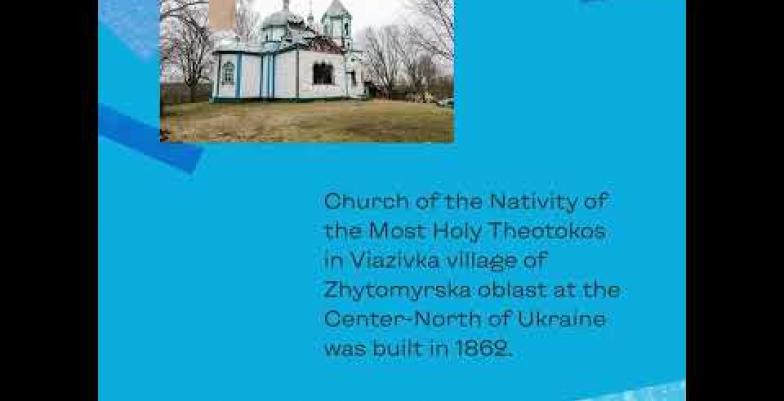 Wooden churches of Ukraine are important not only for believers:  they are distinctive elements of the rural landscape and help preserve authentic elements in the era of modernization and technologies.

The church of the Nativity of the Most Holy Theotokos in Viazivka village of Zhytomyrska oblast at the Center-North of Ukraine was among those precious buildings, dating back to 1862. The landmark was under protection by the Ukrainian state and attracted travelers to stop and step in. For prayer or out of ethnographic curiosity to discover the ancient handmade wooden altar.

After March 7th 2022, when Russian troops fired upon the building, only the bell tower of the church remained standing. For whom its bells toll?

Since the beginning of Russia’s war on Ukraine, many human lives were lost or wrecked. Cultural and religious heritage also became victims of this cruel invasion into an independent country that highly respects freedom of religious beliefs. 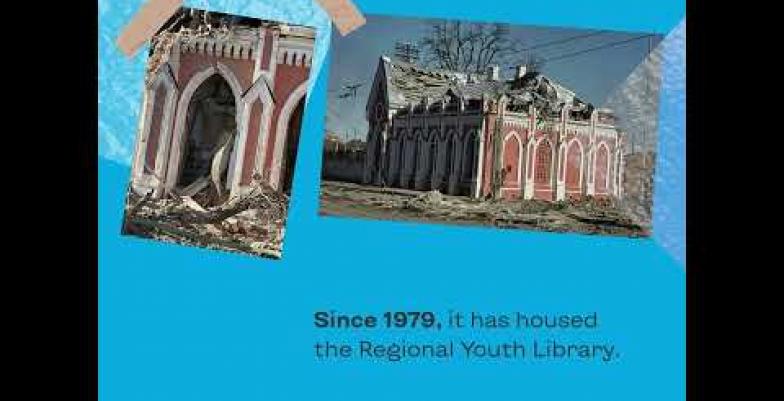 In this video, we are zooming in on the heroic city of Chernihiv in the North of Ukraine. Chernihiv was under heavy attack since the beginning of Russia’s invasion.

The Regional Youth Library was heavily damaged. This house was formerly a museum of Ukrainian antiquities. It was founded by a local aristocrat and collector Vasyl Tarnovsky in 1902. The most important Ukrainian poet and visual artist - Taras Shevchenko - was always welcome in the Tarnovskys’ home and the family did a lot to preserve his legacy.

During WWII, part of the museum collection was lost and the rest was later relocated to Kyiv. The Youth Library was functioning here since 1979. It was recently renovated and its cozy rooms were always full of enthusiastic visitors.

On March 11th, the library was almost completely destroyed. Soon after the liberation of Chernihiv, the strategy of rebuilding its cultural heritage is already being discussed. 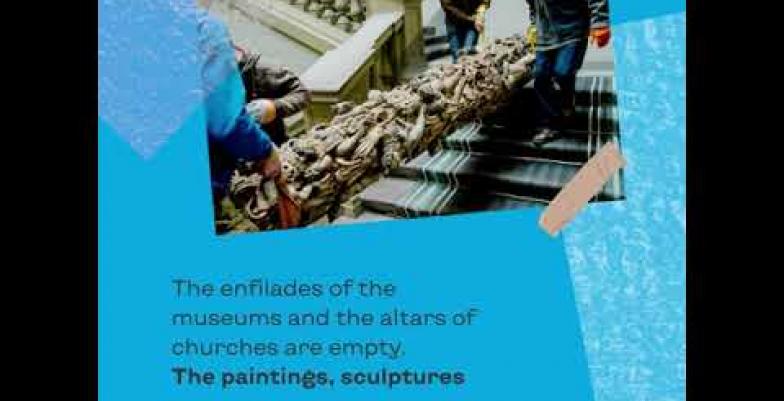 Lviv – the city in the West of Ukraine has always been a multicultural place. This can be seen in its architecture. In 1998, UNESCO listed the historic centre of Lviv as part of World Heritage. Walking down the cobblestone streets lined with ancient buildings feels like visiting an open-air museum. Today it looks more like a modern art installation.

The famous fountains of Rynok Square by German sculptor Hartman Witwer: Amphitrite, Neptune, Diana and Adonis are wrapped in bubble foil and scotch tape. The enfilades of the museums and the altars of churches are empty – the paintings, sculptures and sacred objects were moved to safe shelters.

Until recently, Lviv remained a relatively safe destination for people from all over Ukraine. Yet, it did not avoid missile strikes that came from Belarusian territories.

Since the beginning of Russia’s war on Ukraine, cultural heritage is purposely being targeted. Ukrainians rushed to protect important cultural objects in Lviv, often with the support of international institutions. 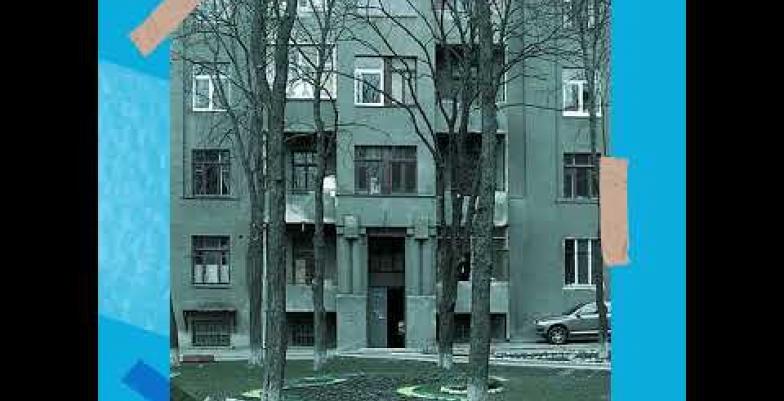 Cultural heritage is purposely being targeted during Russia’s war on Ukraine. In this video, we revisit the Slovo building in Kharkiv. The name comes from СЛОВО [SLOVO] the Ukrainian word for the letter C, as this building has a distinct C-shaped shape.

During the 1920’s, Slovo was a communal residential building for Ukrainian writers. During the 1930’s, in the course of Great Purge, it became a symbol of Executed Renaissance. In 2018, a Kharkiv Literature Residence was launched in the Slovo building. The place immediately became an inspiring destination for contemporary writers from all over the world.

However, on 8 March 2022, the facade of Slovo was damaged by Russian shelling. Kharkiv remains the target of non-stop brutal Russian artillery fire. Nevertheless, the Slovo residence reminds us that word is adamant. Read more about the Slovo building and the bravery of artists influenced by it.

Continue reading about the story of the building and of some of its occupants.

Organisations on the ground