Belarusians courageously demand democratic change. The EU must stand by them

For weeks, people in Belarus have taken to the streets to protest the fraudulent Presidential elections and the wave of repression that followed. Last Sunday, once again the massive demonstrations were asking for the departure of Lukashenko. During our EU Foreign Ministers meeting we underlined our full support: the future of Belarus must be decided by the people of Belarus and them alone. 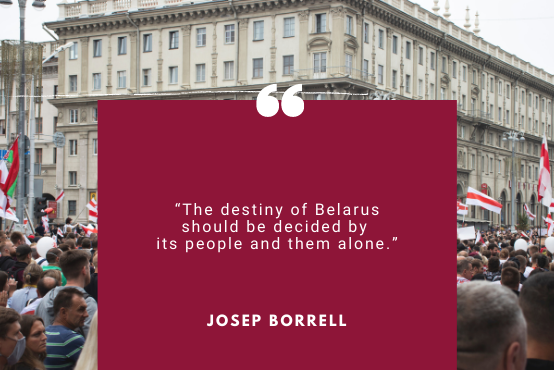 Before our Foreign Affairs Council, we had an informal breakfast with Ms Sviatlana Tsikhanouskaya, one of the key leaders of the Belarusian pro-democracy Coordination Council.

Tsikhanouskaya was the principal opponent of Aleksandr Lukashenko in the Presidential Elections of 9 August. To a certain extent, she is an “accidental” hero. She ran instead of her husband, a well-known blogger who was jailed in May 2020. She was the only true opposition figure allowed to take part in the elections, following the exclusion on technical grounds of the former Deputy Foreign Minister Tsepkalo and the former head of Belgazprom-bank Babariko. Lukashenko miscalculated, thinking that a 37-year old woman, a former teacher and a housewife would not pose a challenge. Together with the wife of Tsepkalo and head of Babriko’s campaign Maryja Kaliesnikava, the female trio managed to mobilise the Belarusian population to vote against Lukashenko.

Following the election, Tsikhanouskaya has been forced to leave the country on 11 August and remains in exile in Lithuania since then. It was important to hear her assessment of the latest developments, including on the prospects for an inclusive national dialogue and how the EU can support this and the people of Belarus in their fight for democracy.

It is impressive and moving, to see hundreds of thousands of Belarusians who every weekend have come out to protest peacefully, with courage and dignity

Six weeks after the elections, the situation remains grim. But it is also inspirational. It is impressive and may I say, moving, to see hundreds of thousands of Belarusians who every weekend have come out to protest peacefully, with courage and dignity. For their part, the authorities have responded with ever larger waves of arrests, violence and intimidation.

From the start of this crisis, the European Union has been clear: we do not recognise the results of the presidential elections and we consider Lukashenko an illegitimate President; we reject his use of violence and the repression of fundamental and democratic rights; and we see an inclusive political dialogue with new elections that must be free and fair, as the only way forward.

The EU’s four lines of action

Unfortunately, the regime has continued on its course of defiance. So today, the discussion among ministers was all about lines of action that the EU could pursue to give substance to our political stance. We agreed to pursue four basic tracks:

First, sanctions. A package of around 40 names and entities has been prepared, which targets those responsible for the electoral fraud, the repression of peaceful protests and state-run brutality. In concrete terms, it would mean these people and entities will have any assets inside the EU frozen; they will not be able to receive any kind of funding or finance from within the EU; and they will be banned from entering the EU.

Unfortunately, the sanctions have not been adopted yet, because it requires unanimity and one EU Member State was not ready to join the consensus. I will present the outcome of the discussions we had in the Foreign Affairs Council to the next European Council where we will discuss the relationship with Turkey. European leaders will have to provide further guidance on how to proceed. In the meantime, we will continue to re-evaluate the list of 40 names on a permanent basis, in light of events. I made clear today that we have a duty to adopt these sanctions. It is a matter of our credibility.

The time has come for the EU to call things by their name: Mr Lukashenko has lost all legitimacy.

The second line of action focuses on the need for national dialogue and the role of the Organisation for Security and Cooperation in Europe (OSCE). With the imminent, attempt by Mr Lukashenko to organise a pseudo “inauguration” (possibly already this week), the time has come for the EU to call things by their name: Mr Lukashenko has lost all legitimacy.

It is clear that the Coordination Council must be included in a forthcoming national dialogue. They are clearly calling for the holding of new, free and fair elections under international observation. The best way out of a crisis of political legitimacy such as in Belarus is to organise credible elections so that the people can freely choose their President and hence the future of their country.

For weeks, the Belarusian authorities have refused any engagement with the pro-democracy movement or international mediation through the OSCE, of which Belarus is a participating state. Despite this regrettable stance, we need to continue exploring any possibilities. For this reason, I welcome and support the activation of the “OSCE Moscow Mechanism” to carry out a fact-finding expert mission focusing on alleged human rights violations. We also support the proposal by the current and future OSCE Chairman in Office, Albania and Sweden, to go to Minsk. I am ready to go to Minsk if this could contribute to progress. Until now, Lukashenko has refused to engage with the European Union at any level.

There should be no third party interference; the destiny of Belarus should be decided by its people and them alone.

We have said all along that as EU we don’t have a hidden agenda and that we simply want Belarusians to shape their own future, free from external interference. What’s happening in Belarus is not a geopolitical issue; it is not about choosing a side, between the EU and Russia. There should be no third party interference; the destiny of Belarus should be decided by its people and them alone. When we support the democratic choice and fundamental rights of Belarusian people, it is not because we are eager to influence the outcome of any elections, or push the country in a certain direction. I repeat: this choice belongs to Belarusian people.

We know of course about Belarus’ historical, political and cultural ties with Russia. That’s why in my regular contacts with Russian Foreign Minister Lavrov I have underlined the EU’s principled position of respecting Belarus’ sovereignty and independence – we are not imposing anything on anyone. I urged Russia to adopt the same stance, to avoid external interference. At the same time, they can be helpful in convincing the Belarusian authorities to enter into dialogue with the pro-democracy groups. I will continue to discuss these issues with the Russian authorities in the coming days and weeks.

The third line of action is to do a full review of EU-Belarus relations. As EU, we must be able to react in a strategic and decisive manner to various possible scenarios that are developing in Minsk. We want to use all instruments and levels of engagement bilaterally, but also regionally including in the Eastern Partnership framework. This review will of course be done together with Member States. Important elements that Foreign Ministers flagged were ensuring that we must look to further support the Belarusian people - in particular the civil society and independent media. Perhaps we can also look at increased contacts between students, facilitating exchanges to the EU.

And indeed, the fourth and final line of action is about EU support to the Belarusian population. The European Commission is mobilising €53 million of immediate support to the Belarusian people in these challenging times. It covers legal assistance, medical support and other emergency assistance to those most in need. It also includes support for civil society and independent media.

We are looking, also with Member States, how we can scale up our support in that crucial area. Several of our Member States are already very active when it comes to civil society support and, as elsewhere, a Team Europe approach, where we pool resources and expertise, will deliver the greatest impact.

The EU will stand by the Belarusian people who so clearly insist that this choice must be a democratic one.