Central and South Asia: Connectivity and the need for a stable Afghanistan

HR/VP Blog – Last week, I visited Tashkent to take part in the Central-South Asia Connectivity Conference. This event brought together high-level participants from the region and beyond to discuss regional connectivity and security issues, as well as the situation in Afghanistan. The aim of the conference was to explore how joint efforts can promote stability, security and prosperity in a region of growing strategic importance for the EU. 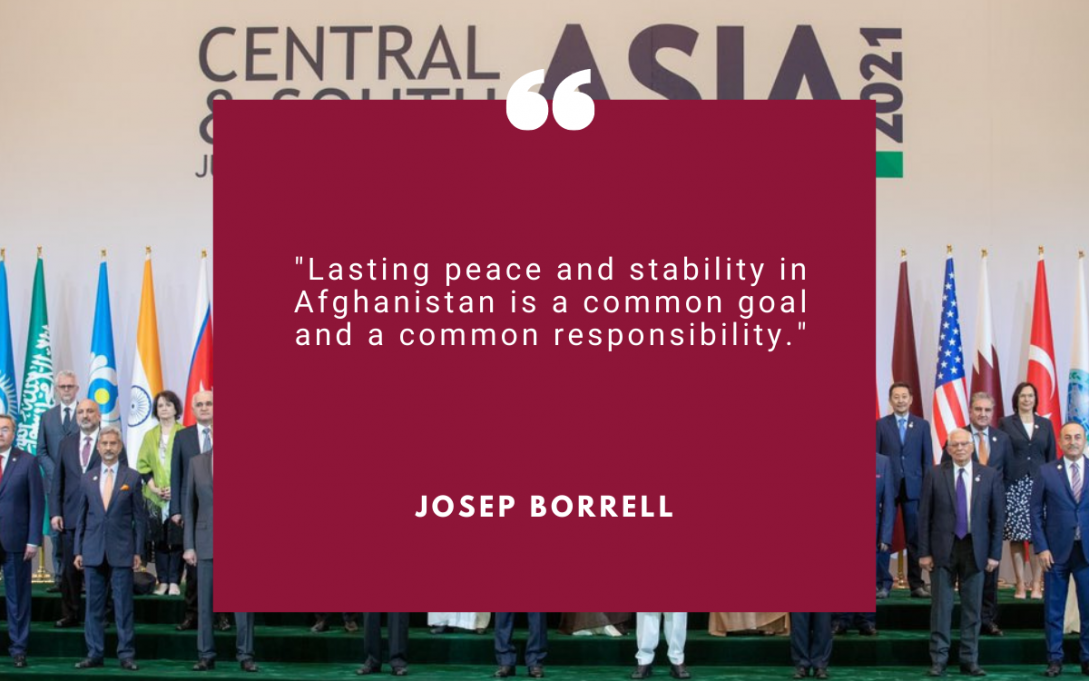 I met with the Afghan President Ashraf Ghani and the Pakistani Prime Minister Imran Khan, but also with the Chinese and Indian Foreign Ministers, and many other partners. We discussed how we can ensure closer integration of Afghanistan into the wider regional cooperation framework.

I shared my concerns about the Taliban offensive, the sharp increase in civilian casualties and the growing number of Afghans fleeing their homes and their country. Lasting peace and stability in Afghanistan must be a common goal and a common responsibility, for Europe and the international community. An Afghanistan that descends into chaos would expose the region to further drug trafficking and the spread of radical ideologies, terrorism and violence. Afghanistan’s neighbours, including the Central Asian countries, are particularly vulnerable to the negative repercussions, but it would also affect our security in Europe.

As EU, we are a major partner for Central Asian countries in their reform and economic transition process. I reiterated that the EU and its member states are ready to support joint efforts. I also underlined that Afghanistan’s neighbours are in a key position to support the peace process, through constructive engagement and clear messaging to the Afghan parties, and by refraining from support to armed groups out of short-term concerns about narrow interests. The EU supports an inclusive, Afghan-owned and Afghan-led peace process leading to a negotiated political settlement. This requires the Taliban to commit to a negotiated settlement. For this to happen, all concerned – neighbouring countries, the EU and all international partners – have to be clear and frank in our messages to the Taliban. We must spell out the consequences of their chosen course of action, including for the EU’s engagement. A military takeover by the Taliban, or attempts to restore an Islamic Emirate are unacceptable – to a majority of Afghans, to the countries in the region and to the international community. It would lead to non-recognition and isolation. Future support to Afghanistan by its international partners, including the EU, is and will remain conditional on the preservation of the democratic progress of the last twenty years. This includes the respect for fundamental rights and freedoms, including the rights of women and the protection of minorities, as well as the strengthening of state institutions and the fight against corruption.

I also discussed with Central Asia Ministers our wish to build strong and non-exclusive partnerships, open to cooperation with others, on shared goals, as stated by the 2019 EU Strategy on Central Asia. This means intensifying cooperation in a variety of sectors from climate, environment, health, water, human rights and capacity-building in border management. I reconfirmed the EU’s readiness to engage in developing regional connectivity and overcoming joint security challenges.

This year marks the 30th anniversary of the independence of our Central Asian partners, after the collapse of the Soviet Union. The road to closer regional cooperation has not always been easy, but it is a real achievement which should be further developed. Indeed, regional cooperation among Kazakhstan, Kyrgyzstan, Uzbekistan, Tajikistan, Turkmenistan, Afghanistan and neighbouring countries can not only boost socio-economic development, but also address shared security challenges, including illegal migration, drug trafficking and terrorism threats.

Central Asia has a vast potential of young people and natural resources and it has a lot to offer to European investors. The EU is already a main trading partner; in 2020, two-way trade in goods amounted to EUR 22 billion, and with 114 million people the region has a significant market potential. However, to fully benefit from this potential requires the region to advance with structural reforms and a better business environment. This year’s EU- Central Asia Economic Forum in November will be another opportunity to work towards sustainable and inclusive connectivity.

In short, last week’s Central-South Asia Connectivity Conference proved that regional cooperation and regional dialogue are key. As EU we will do our part.

​The European Union: a reliable partner for sustainable connectivity in Central and South Asia